Peru: Arson of church in solidarity with comrades of the social war Marie Mason and Eric McDavid Communique from vivalaanarquia, translated by war on society:

This past 11th of June a fire was started on the side of a church which was under construction; we climbed the wall with mats in order to reach the entire wooden frame, instead of climbing the wall and going inside, we proceeded to leave plastic bottles filled with gasoline on which a sticker was placed, (alluding to the comrade fallen in combat, Mauricio Morales); and an additional amount [of gasoline] was splashed across the fence. Moments before climbing the walls again, we set fire and showered leaflets in solidarity to the eco-anarchist comrades Marie Mason and Eric McDavid; it was the same place where days before we painted slogans, while we were making an inspection of the area.

By way of this action we express solidarity with those who, like many other prisoners of the social war in the world, do not give up in this struggle; through this form we also show that our solidarity continues and will continue to be a weapon against the whole system of domination, and that those on the inside are not alone.

We do not surrender, we continue onward, we know that with intentions we do not change anything, but only with actions. Seek to live anarchy!

For fear to not destroy solidarity… for solidarity to destroy confinement!

Against the prisons of capital!

Freedom to the accused of the “Bombs Case”! 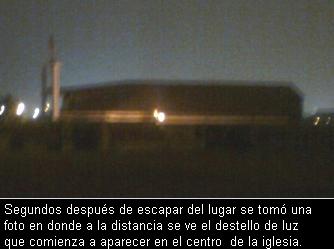 Seconds after escaping the location we took a photo in which in the distance can be seen the flash of light that starts to appear in the center of the church. 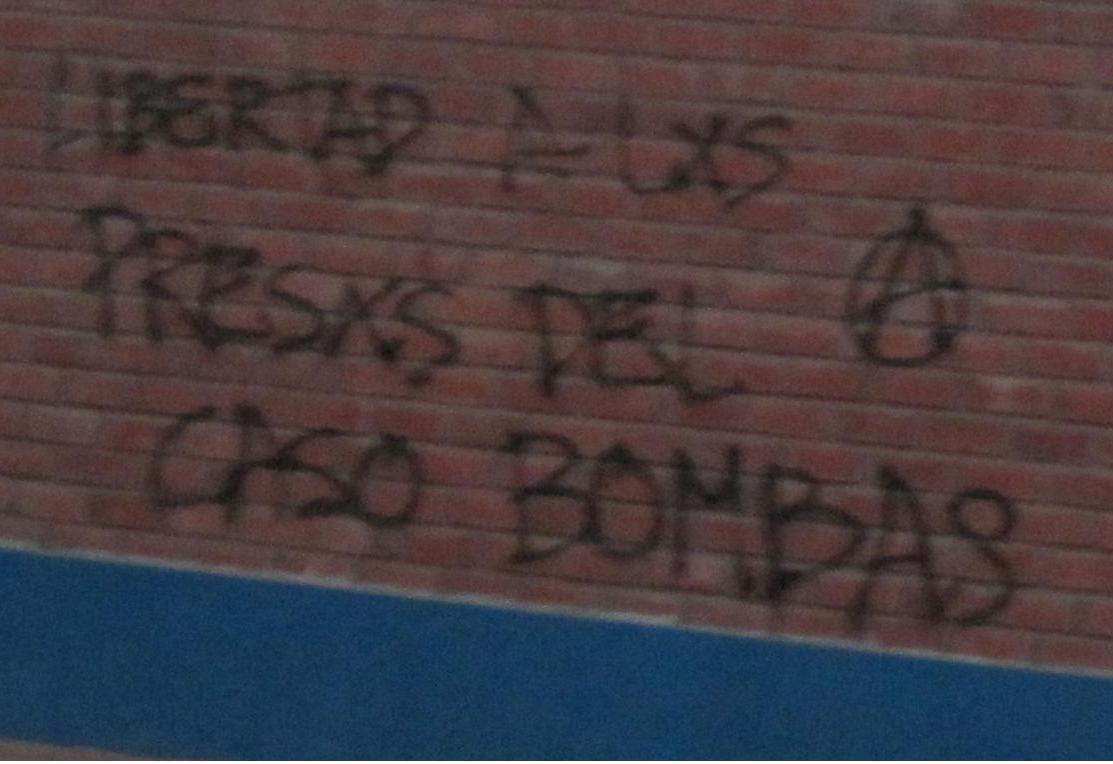 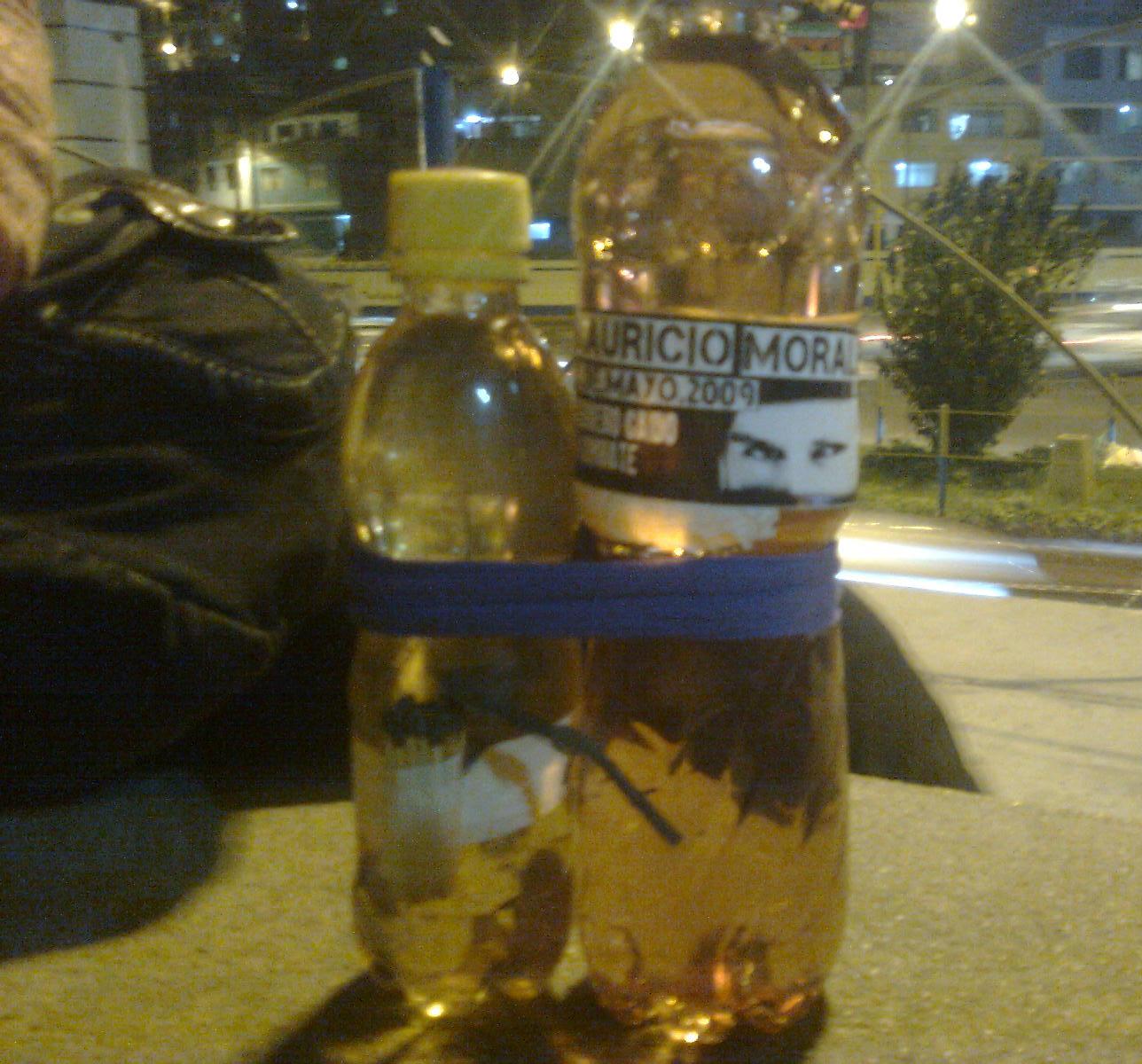 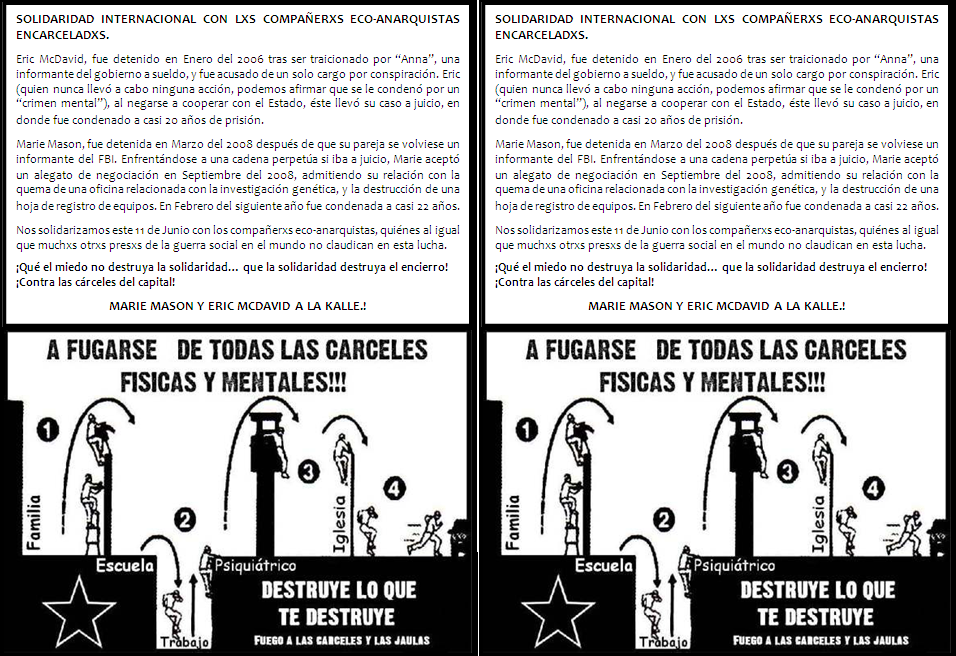 text of the leaflet:

Eric McDavid was arrested in January 2006 after being betrayed by “Anna,” a paid government informant, and was charged with a single count of conspiracy. Eric (who never carried out any action; we can say he was committed for a “thought crime”), refusing to cooperate with the State, was brought to trial, where he was sentenced to almost 20 years in prison.

Marie Mason was arrested in March 2008 after her partner turned FBI informant. Faced with life-long imprisonment if she went to trial, Marie accepted a plea deal in September 2008, admitting her involvement in an arson of an office involved in genetic engineering. In February of the following year she was sentenced to almost 22 years.

We express solidarity this June 11th with the eco-anarchist comrades who like many of the other prisoners of the social war in the world do not give up in this struggle.

For fear to not destroy solidarity… for solidarity to destroy confinement!

Against the prisons of capital!

TO FLEE FROM ALL PHYSICAL AND MENTAL PRISONS!!!

DESTROY WHAT DESTROYS YOU

FIRE TO THE PRISONS AND THE CAGES

1 Response to Peru: Arson of church in solidarity with comrades of the social war Marie Mason and Eric McDavid