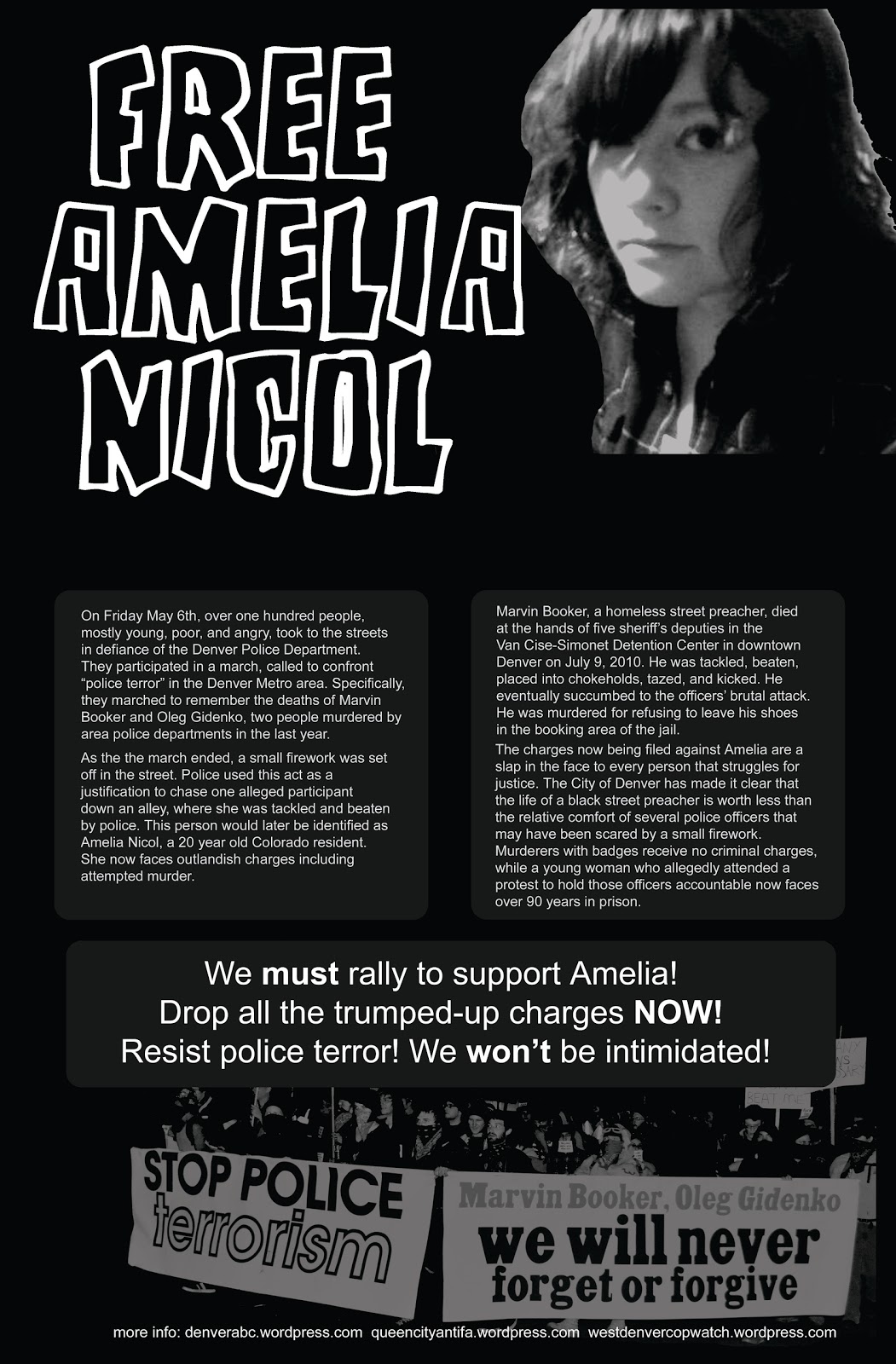 DABC NOTE: Sorry for the long delayed update on Amelia’s court hearing that took place Monday June 27th. Things have been super busy in Denver, especially as folks gear up for Running Down the Walls on July 30th.

Amelia Nicol, the arrestee from the May 6th March Against Police Terror, had a second arraignment on Monday June 27th in courtroom 5G of the Lindsay-Flanigan Courthouse in downtown Denver. During the short public hearing, supporters crowded the court room to show solidarity with Amelia as she continues to face one felony charge of possession of explosives, two misdemeanor counts of assault on a law enforcement officer, and one misdemeanor charge of resisting arrest.

During the arraignment, Amelia’s attorney waived the right of a public reading of the charges, and continued to push for a resolution to this case before the end of the speedy trial period, which would occur in December.

A discovery hearing was scheduled for August 22nd at 8:30 am in the same courtroom. At the discovery hearing, the prosecution will present any evidence they will present at the trial, and after hearing arguments from both sides, the judge will rule as to what evidence may or may not be admissible in court. This will be an important and interesting hearing for those who attend, as we will finally have a full picture of all the evidence in the case (of which we are certain, after the preliminary hearing on June 9th where over half of Amelia’s charges were dismissed by a judge, that little, if any, evidence exists.)

A trial date was set for Tuesday October 4, at 8:30 am in the same courtroom. If the case is not resolved by October 4, Amelia will face a jury trial for the felony and three misdemeanor counts.

In other news related to this case, an ad-hoc coalition has called for another march against police terror, set for this upcoming Saturday, July 9th. July 9th marks the one year anniversary of the murder of homeless street preacher Marvin Booker at the hands of deputies in the Van Cise-Simonet Detention Center. The march will convene at the Denver Skatepark at 20th and Little Raven at 11:30 am. The march will then proceed through downtown to the Van Cise-Simonet Detention Center, where the Colorado ACLU and local leaders of Denver area black churches will be hosting a memorial service for Reverend Booker.

In other Denver ABC news, if you live in the Front Range area, Denver ABC will be hosting our annual Running Down the Walls 5k solidarity run on Saturday July 30th. We’re looking for runners, volunteers, and donors. More information can be found at: http://denverabc.wordpress.com/2011/06/23/running-down-the-walls-2011/

For case updates and news on state repression worldwide, continue to check the Denver ABC blog at denverabc.wordpress.com.

Thanks to all the comrades across the world who have stood in solidarity with Amelia! Big ups and solidarity to comrades in France, Argentina, Brazil, Chile, Greece, New York, and all those in other countries, cities, villages, and communities who have staged solidarity actions!

In solidarity, for a world without cages!

This entry was posted in Updates and tagged Amelia Nicol, Denver, United States. Bookmark the permalink.