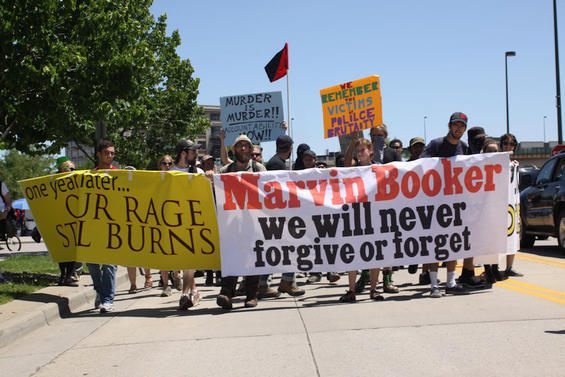 They could not, and will never, take us all.

Fists and hearts burn in the streets as Denver marks the one year anniversary of the murder of Marvin Booker.

Saturday, July 9th marked the year anniversary of the murder of Marvin Booker, a homeless street preacher booked on minor charges and killed by Denver Sheriff’s Deputies for attempting to retrieve his shoes. A fifth round of demonstrations was called for by West Denver CopWatch to mark the anniversary amidst a backdrop of local repression against the burgeoning anti-police movement.

In May, a demonstration ended with the flashing and banging of a firework during the rowdy crowd’s dispersal. Police arrested a twenty year old woman and charged her with two counts of attempted murder of a police officer and a slew of other charges. The Denver Anarchist Black Cross, a revolutionary legal support organization operating in the area for a few years now, mobilized court support and other actions demanding her release without charges. The attempted murder charges and most others were dropped, but she is still fighting felony possession of an explosive and misdemeanor resisting arrest charges.

With this in mind, more than 150 demonstrators converged around the Denver skate park shortly before noon on the 9th. Like many recent mobilizations against the police, cops were waiting to flank participants and keep a tight reign on the event. An officer approaching the crowd was rebuked by several people when he condescendingly offered “help.” After a short speech by a member of West Denver CopWatch, the march took Little Raven St. to make its way to the Van Cise-Simonet Detention Center where Booker was killed. Ideally, the march was to swell a rally held by the ACLU and Marvin Booker’s family set to take place once the demonstration arrived.

Fleets of police on bicycles as well as two squad cars and two police vans trailed the march from its onset. Loudly chanting slogans that have quickly become standards for the roaming crowds confronting cops over the last year, some officers reacted to “Oink, oink, bang, bang, every day’s the same old thing” with smiles while others were visibly upset by “from Denver to Greece, fuck the police!” and spirited cries of Marvin Booker’s name.

As has been the precedent for the last three demonstrations, protesters hung stickers of Marvin’s likeness and gave out fliers to passerby. Approaching a pedestrian bridge that leads to the commercial center of the city and the arena of many other confrontations with law enforcement, cops were en masse picking up their bikes and hustling up the stairs. Smart people in the crowd took advantage of this and rerouted the march towards 15th Street, while the demonstration loudly began laughing at the police waiting at the top of the bridge.

15th Street was quickly shut down by the crowd, who used an overpass to amplify chants, drums and general shouts and taunts towards the police in tow. Stickers hit construction equipment and a few people began throwing construction barrels into the road to block police. Hanging a left towards the 1100 block of 16th, the march made its way towards the gawking shoppers on the 16th Street Mall, the commercial center of downtown Denver. Greeted with raised fists and applause towards protesters, many police officers were looking overheated and demoralized.

As the demonstration approached Lawrence St., two cops jumped off of their bikes and tackled a demonstrator to the ground after chasing him through the crowd. A scuffle broke out as folks from the march moved in to attempt to unarrest the comrade. Shoving, punching, and pushing erupted as police hurried to defend the officers making the arrest.

More police quickly arrived to back them up and seal off the irate protesters responding to the arrest. Another scuffle broke out, and shortly thereafter, black clad march participants linked arms and began berating the cops. Screams and challenges to fistfights met the police, as did debris thrown towards the line of police. One cop was observed taking his gun (not taser) out of its holster and the crowd grew visibly angrier, chanting “let him go!” and screaming about the officer with a gun. As the police led the arrested protester back to the van in handcuffs, the police attempted to regroup themselves as a tactical decision was made by he crowd to keep marching.

Within minutes of the initial confrontation a sticker was plastered on the windshield of an unoccupied police motorcycle and the police attempted to grab a demonstrator they accused of the action. March participants rushed to the defense of the comrade. Another masked demonstrator wrapped their arms around the protester and police surrounded the duo. Fistfights and shoving matches between officers and other demonstrators broke out, and in the end of the fracas two more protesters were in handcuffs and a few police were observed limping and wiping blood from their lips. Many police were wielding pepperspray and tasers, ready to attempt to subdue the scuffling protesters, though these weapons were not used.

After the two arrestees were led to the van, the march continued up 16th Street. After realizing that the police have criminalized the act of putting up stickers to justify a violent crackdown on the march, aggressive protesters looking to defy the arrests and the authority of the police continued slapping the stickers on every surface that was available. Several hundred fliers were passed out, and dozens of stickers littered the downtown area.

The march weaved its way to the jail, as Marvin Booker’s name echoed off the walls of the jail. The marching crowd was warmly welcomed by the waiting rally participants. Several speeches were made and police brutality victim Alex Landau, who was just awarded more than $700,000 in settlement money, performed an anti-police rap to the crowd. Many participants at the rally were in the streets to march and confront the cops and the rally is pegged at up to 300 people by media estimates.

Members of Marvin Booker’s family spoke and red, black, and green balloons were released into the air to commemorate the anniversary. The family also contributed to the growing bail fund for the recently arrested protesters, as did several members of the ACLU.

Thanks to the legal support infrastructure of the Denver Anarchist Black Cross, it was learned that the first person arrested was a minor and released with a citation for defacing property with a sticker. The two other arrestees spent eight hours in custody before nearly $700 was raised for their release. Both were released before the night was over. Both face defacement of private or public property and will be arraigned on August 9th. Court support is being organized by DABC. For legal updates, please check denverabc.wordpress.com. Updates on these three arrests and Amelia Nicol’s case, will be posted as they become available.

Once again, and not surprisingly, the media was mute on this action. Other than the local entertainment weekly Westword, which took pictures and featured a small write up, a CBS affiliate that had a small report on the rally, and the Colorado Independent, which reported on the rally, media blacked this demonstration out just as they have the last three marches.

The local anti-police movement is undeterred by the arrests of its comrades and the heavy handed tactics of the police. Despite the three arrests, the movement has shown that it can defend itself in the streets and in the courtroom. There would have been many more arrests if the crowd hadn’t fought back the way it did, and the arrests that were made did not come easy to the police. With the city’s case closed on Marvin Booker’s death, the slogan has moved from “Justice for Marvin Booker” to “Avenge Marvin Booker.” The movement in Denver is making good on the promise of ‘No Justice, No Peace,’ and it is unlikely that repression will stop these demonstrations or similar anti-police activity.

This entry was posted in Actions and tagged Denver, United States. Bookmark the permalink.