We dropped off this 18 foot banner for you before the morning commute. Hope it brightens your day. Glad you’re out!

Special thanks to the SCPD for donating materials. 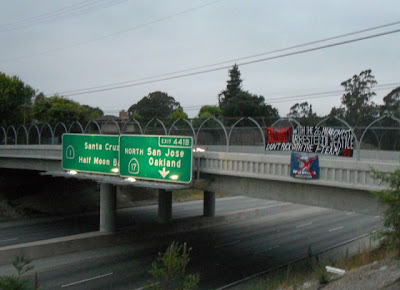 From Santa Cruz to Seattle

There is something deeply troubling about the events in Seattle over the past couple of days. 26 comrades, anarchists of all kinds, were arrested. The first night was in what seems to be a coordinated attack by the police during a social gathering at a private residence. The second in a solidarity noise demonstration in which friends and comrades of those arrested the night before stood strong outside of the jail their friends were stuck in, making noise to show that those locked behind bars were not alone.

These two nights of arrests may seem insignificant in the larger picture of contemporary policing, the brutality of prisons and the omnipresent exploitation of capital and the state upon the entire global population. However the contrary is true: this crack down on anarchists illuminates the basic reality of policing in an age of austerity. Capital is crumbling, showing its contradictions, its inability to continue effectively reproducing its own relations. For this reason any sign of resistance, especially in the United States, is taken very seriously by the state apparatus. Those who are deemed subversives or in any way exist antagonistically toward capital and the state find themselves literally and metaphorically under the gun (this includes not only anarchists but also excluded and surplus populations, inmates, those who pose any threat to the production of value). Recent events speak to this.

There is a connection between the tragic police murders in San Francisco of Kenneth Harding and Charles Hill, the hunger strike spread across California prisons and the arrest of comrades in Seattle. A general intensification of police activity is spreading to deal with the tumultuous consequences of a debilitating and ever more cruel capitalism. Prisons themselves are becoming overcrowded due to this debilitation: more and more of the surplus population must be housed in prisons and kept away from the labor market, there by making conditions within said prisons even more brutal than before. For this reason prisoners have begun (and those at Pelican Bay have won modest demands from) a hunger strike posing a threat to the legitimacy of prison from within. Others who show resistance, as comrades in Seattle (and the greater Puget Sound area) have continuously and bravely done, to capital and the state find themselves brutally suppressed (as history teaches this repression increases as the power and effectiveness of revolutionary activity increases). The general state of things, of capital itself, has produced new collectivities of resistance and new forms of repression. This is the ground upon which we walk, we talk and we act.

It is important throughout such unsettling and yet exciting times to critically consider what solidarity means. How we will lend support and simultaneously expand conflictual activity with the state and capital. For solidarity is not a narrow activity but the act of listening, of reacting, of conversing, of pushing forward, of picking up the pieces others have put in place. We must take care of one another through these difficult times however we can, however our resources and immediate situations allow. We must also realize our common project: the dismantling of the state, of capital, of prisons, of the police, of this entire society as is. Looking to each other and the enormity of this project can inspire solidarity in ways we never thought possible. We must pick each other up and never stop pushing forward.

until the last prison burns
and every inmate sees the sun.
war on the police and capital,
for anarchy and communism.

This entry was posted in Actions and tagged Santa Cruz, Seattle 26. Bookmark the permalink.