Egypt on alert after Israel embassy stormed in Cairo 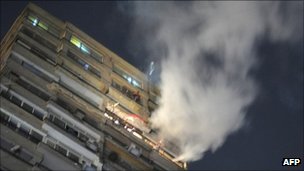 Egypt has declared a state of alert after protests on the streets of Cairo, following the storming of the Israeli embassy on Friday night. Security forces fired tear gas and drove armoured vehicles at protesters throwing stones and petrol bombs. Three people died, officials said.

The protesters broke into the embassy building, entering consular offices and throwing out documents, officials said.

Israel flew its ambassador and nearly all its diplomats back home.

Egypt’s governing military council is meeting later on Saturday to discuss the situation.

The health ministry said that one of the three people who died had suffered a heart attack. More than 1,000 were injured.

Hundreds of protesters remained near the embassy until after dawn, burning tyres in the street and chanting slogans against Egypt’s military rulers.

Riot police were on the streets and live gunshots were heard, says the BBC’s Bethany Bell in Cairo, while the air was thick with tear gas.

Six members of the embassy staff were trapped inside the building during the riot and had to be rescued by Egyptian commandos, an Israeli official told the BBC.

He thanked Egypt for freeing the Israeli staff and described the unrest as a “serious blow to the fabric of peace” between the two countries.

The incident was a “gross violation” of standard diplomacy, he said.

Egypt is one of only two Arab countries – along with Jordan – to have made peace with Israel.

Anti-Israel sentiment has been on the rise in Egypt, fuelled by the deaths on 18 August of five Egyptian policemen on the Israeli border.

The Egyptian state news agency Mena said 448 people were injured in the clashes overnight into Saturday.

From there, hundreds marched on the Israeli embassy. They smashed through a security wall around the building before a group of about 30 broke in and threw documents out of windows.

An Israeli official told the BBC the intruders had entered consular offices, but not the main embassy.

Live TV pictures in the early hours of Saturday showed protesters throwing petrol bombs at police vans which drove at a crowd of people to try to scatter them.

Shots were heard in the area but it is not clear who fired them. Protesters also attacked a police station nearby.

An Israeli official said 80 people – embassy staff, including the ambassador, and their families – were flown out overnight to Israel.

The Israeli consul remains in Cairo as acting ambassador.

UK Prime Minister David Cameron condemned the attack, and called on the Egyptian authorities to meet their obligations to protect diplomatic property and staff.

This entry was posted in Actions and tagged Cairo, Egypt, Israel. Bookmark the permalink.