Mexico: An analysis of recent anti-tech attacks, after the murder of a biotechnologist 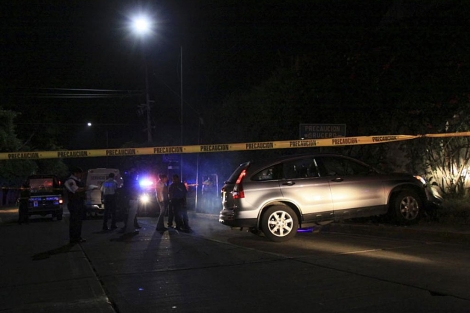 Short circuits, robberies and accidents to cover up the truth…

On November 8th of this year, biotechnologist Ernesto Méndez Salinas, who works in the Biotechnology Institute at UNAM in the city of Cuernavaca in Morelos, was assassinated by a shot to the head.

The murder sparked the outrage of the Head of Studies, who declared himself in mourning for the death of the researcher.

The Attorney General (PGJ) of Morelos state confirmed the next day (November 9th) that the man assassinated in the middle of Tuesday night was a recognized and awarded researcher at UNAM, whose death had not yet been confirmed.

According to initial investigations, Méndez Salinas was traveling in a car Tuesday night on Av. Teopanzolco (one of the busiest in Cuernavaca) when he was overtaken by persons unknown who shot him in the head, causing the vehicle to crash.

Méndez, 51 years old, who belonged to the National System of Researchers (SIN), with degrees in chemistry, pharmacy and biology, was also a doctor in biotechnology since 1993 and had carried out studies at the University of Washington, in Saint Louis (Missouri, United States) in 1995; he was one of the most important researchers in the country with respect to biotechnology.

The two lines of investigation that have been initiated, according to Morelos state authorities, is an supposed failed attempt to rob his car or an act by persons unknown who wanted to hurt the scientist.

Some important information should be noted here–the second line of investigation refers to some threat that some persons unknown could have made, but to what does “persons unknown” refer? Perhaps they are speaking of some group of anti-industrial style who had previously declared that their hands would not tremble to harm or even kill some scientist?

Remember that the first lines of investigation when Monterrey Tec was bombed were inclined toward some disgruntled student or to some concrete group that was opposed to technological development. In the end, it turned out that the second option was the correct one.

The assassination of the biotechnologist was made exactly November 8th, and also remember that on August 8th there was an attempt against academics at Tec in the State of Mexico that left two technologists wounded.

So, after exactly three months, a biotechnologist is assassinated by a single shot to the head and that moreover, in the place there couldn’t be found the casing from the 38 caliber gun that was used to pierce Dr. Méndez’s head. It seems that the persons unknown did it so as to not leave a trace.

On September 21st, Individualities Tending toward the Wild (ITS) released their final public communique (claiming responsibility for sending a explosive package to director Pedro Bajcich of INIFAP and sending a incendiary package to the nanotech professor Flora Ganem of FES-C, in addition to giving an extensive analysis on various themes), declaring that they would continue taking actions but without claiming them; after this it was announced on October 3rd that a package bomb had exploded at the Multipack courier company in Guerrero Colonia of Mexico City while being handled by employees, three of whom ended up with various wounds, the press reported that there had been two explosions from two packages, although this hypothesis has not yet been confirmed, after several days prosecutor Miguel Ángel Mancera confirmed through a radio interview that Mexico City’s specialized experts had gathered information on who the package was addressed to, but the information has not seen the light of day.

After this, on October 18th an anonymous call warned of the placement of a bomb at “Madero Tec” in Tamaulipas. Although this all turned out to be a false alarm, it added to a series of bomb threats at Tamaulpias universities, the others being in the Autonomous University of Tamaulipas (UAT), in the Monterrey Tec campus in Puebla, and in the Polytechnic University of Pachuca in the city of Zempoala, Hidalgo (where there are nanotechnology researchers) where hundreds of students had to be evacuated. Security measures in universities have increased since the threats against UPVM (in Tultitlan), Monterrey Tec (in Atizapan) and FES (in Cuautitlan), all of these in Mexico state, and against INIFAP (in Mexico City) this year, later claimed by ITS.

The possibility that some group that opposes technological development fired on a biotechnologist on November 8th is one of the investigations that Morelos state authorities, and surely federal authorities, are following.

After the kidnapping of the researcher Yadira Dávila Martínez (August 5th of this year) of the same Biotechnology Institute of UNAM, and her body was found dead on August 9th, some pointed to ITS as responsible for the assassination of the researcher since that same day the claim of responsibility in Mexico state would be made known, but everything points to common thugs or delinquents of the area who, upon not receiving money for the kidnapping, ended the scientist’s life.

The assassination of the biotechnologist Méndez Salinas is completely different than what happened to Yadira Dávila. Care was taken to not leave traces, in being sure to fire a single bullet.

They have tried to cover this up with the supposed robbery of the scientist’s car, but by now in Mexico nobody believes anything; according to the government, all the fierce arsons that the CCF-Mexico and the CI-MSA have claimed are short circuits and the recent death of the Secretary of the Interior and other persons close to the president have been an accident.

Threatened universities, the assassination of the scientist, and an anti-technology group that has previously said it continues with the war against academics, scientists, researchers, or as they call them “technonerds,” is what is happening in Mexico.

2 Responses to Mexico: An analysis of recent anti-tech attacks, after the murder of a biotechnologist