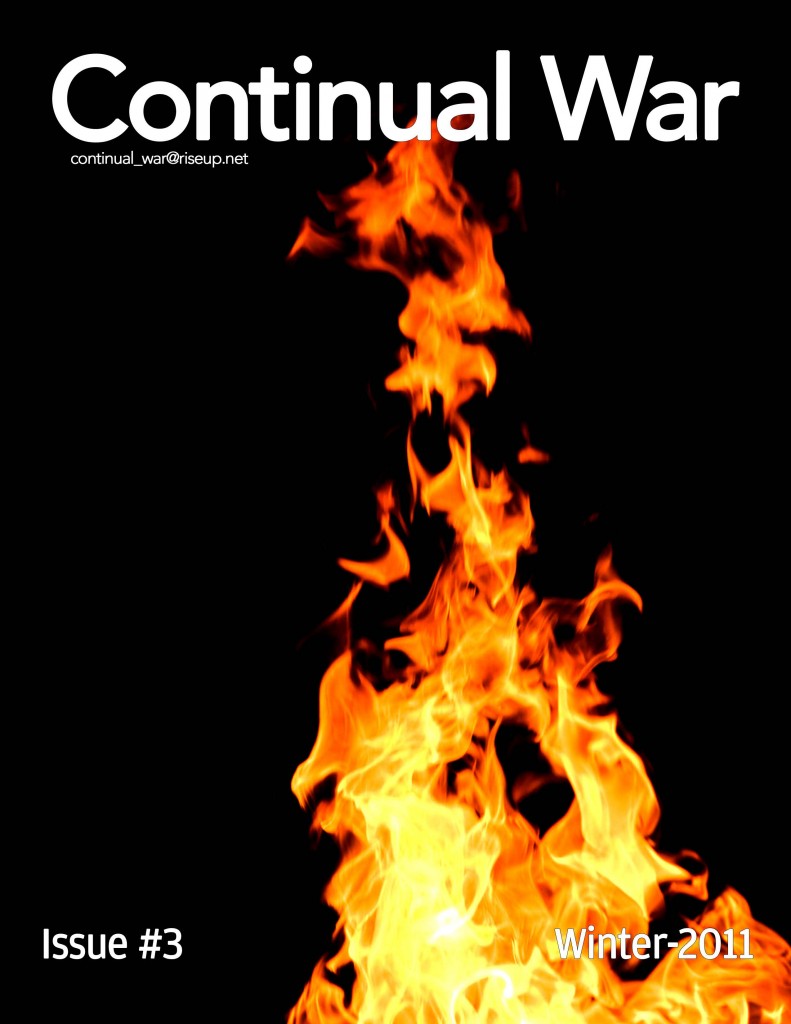 “A destructive action will always remain a beautiful thing, even if it is not claimed. It can be done for the sheer pleasure of doing it… But to us this is not enough, we want to make this system fall. The more reproducible the action, the greater is its real destructive potential; the more rebels understand that a real resistance exists the more they will be motivated to action…”

The context of the anarchist milieu in the United States over the last two years has changed quite considerably. Internationally there has been an increase in actions aimed at an offensive rather than a defensive position being taken. Specifically actions of solidarity for the prisoners of the Bombs Case in Chile, the injury of our comrade Luciano Pitronello during an attack with a homemade explosive device – a fire extinguisher filled with black powder and a time delay system – and with the proposal for the “International Revolutionary Front” from the now imprisoned comrades of the Revolutionary Organization – Conspiracy Cells of Fire. To begin acting in diffused cells on an international level, attacking the structures of the current order of state, capital and civilization.

Nationally we are in an interesting position. There have been a slew of anti-police activities in the Northwest, specifically, but also in places like Oakland, San Francisco, Portland and Denver. Generalizing to not just one single place in the United States, but attacks all over. Some of these attacks have been interesting points of struggle, from intervention to agitation, on the basis of self-organization. To attempts at trying to generalize peoples rage against the police beyond ourselves and lobbying with the politicians of the left. Particularly the occupation movements throughout North America – though it has an array of limitations, which won’t be gotten into now – spreads basic anarchist ideas of organizing and acting. We as anarchists have opened up possibilities and moments untouched by our comrades and close friends, in the past. Through attacks on the street against the police and institutions or attacks taken clandestinely at night, that have been a sharpening of ones’ teeth.

The former comrade now turned snitch, Brianna Waters and the transfer of Justin Solondz from China to the States is a critical point of departure. Since Operation Back Fire a case which mainly involved the family has created a presidence in repressing anarchists from acting in a critically offensive way. It was a psychological move on the part of the state to seem like a large panoptical mass constantly monitoring and repressing anyone who chooses to act or be an anarchist. This brings up a second point, solidarity for Justin Solondz is pertinent (since he is one of the few remaining noncooperating defendants) and actions of solidarity can be extended to a comrade who has been on the run from the United States since 2005 (as well as other North American Prisoners). Similarly there are other comrades like Daniel McGowan locked up in the Community Management Units in Marion, Illinois. Under harsh anti-Terrorist laws that where enacted during the Bush Administration for “Islamic Terrorists”. It is pressing that we begin elaborating in a critical way the use of antiterrorist laws by the State as a form of repression for ourselves as anarchists and begin a dialogue in a critically positive light about the use of ELF practices removed from its more ideological hinge within the anarchist movement against all the manifestations of capitalism and its endless network of institutions.

To bring up the national context without the conscious understanding of our overall international context of the anarchist milieu, is a fault. A fault in ones ability to take aim at the expansive networks we see ourselves amidst, and the feeling of a reciprocal desire with others to see the current world destroyed. For if we lack the ability to see the overall context and our relationship to it, we limit ourselves to a piece of that context. If we have the ability to see both of these contexts – the social and anti-social tendencies as a shared and intertwined – we have the potential to unleash a solidarity based on methods of continued attack against the existing order that could be unchained by the guilt of activism and the obligation of a duty characterized by protest or martyrdom. Extending a struggle that begins with ourselves into a project that proliferates outward against this world.

It is important to note that we will begin seeing and in some ways already have a clear divide, between those that are more social and those that are anti-social. This is a horrible separation to be made. There are ways to practice both these methods in coordination with each other. While as to not open ones’ mouth about the hiding of certain comrades or actions of others and propagate a consciousness that is not based in bragging or bolstering ones own actions. The distinction between social and anti-social should not be mistaken with the “underground” militants and the “above ground” organizers, but a way in which those that have an intention based on their own desires as individuals can act in accordance with each other in the ways they find necessary, autonomously and informally. This could be in creating forged identification for fleeing comrades who need to get to another country, finding safe houses for those on the run from imprisonment, attacking certain institutions in retaliation for the attack of police or response to a demo for workers on strike, money obtained through illegal means that goes to social projects, etc. Without this one way of acting for everyone being the right way. With that said the anarchist milieu is at a cross-roads within our own context, to begin elaborating, experimenting with and charting territory that has yet to be discovered by the use of propagating our own ideas through social and anti-social actions diffusely.

“Negation of every society, of every cult, of every rule and of every religion. But I don’t yearn for Nirvana, any more than I long for Schopenhauer’s desperate and powerless pessimism, which is a worse thing than the violent renunciation of life itself. Mine is an enthusiastic and dionysian pessimism, like a flame that sets my vital exuberance ablaze, that mocks at any theoretical, scientific or moral prison.”

Renzo Novatore – I am Also a Nihilist