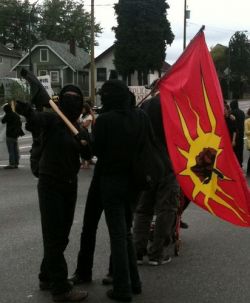 Times are hard and it is painful to see comrades railroaded by the state, although it must be relieving for those who have had their charges dropped. A heart felt congratulations to you! Had all 17 of you drawn the legal processes to their logical conclusion, it would have been a horrible drain on resources and emotions, your decision to take a plea deal is understood and respected.

In our current context, the Canadian state is expanding the prison industrial complex at an increasing rate. On our streets as well surveillance on our everyday lives as human beings continues to creep up on us, camera by camera, microphone by microphone, on buses and street corners and alleyways.

As the earth is plundered, and climate change intensifies, the state fears the anger that bubbles beneath the surface. It knows the minor privileges it is used to buying the working classes of the west off with, rest largely on the ability to produce more junk and more spectacles, that capability is bound to come to an end.

The earth can only offer so much and so the Canadian state’s role in the global economy is dictated by it’s control over a large land mass with a tiny amount of people. As has been the case since it’s birth the Canadian state has had to deal with indigenous communities who have spiritual and cultural ties to the land and a strong desire to survive. In the future it will of course continue with it’s policy of genocide, cultural and otherwise. It will continue to seek members of all communities, indigenous or otherwise, that are willing to sell off their survival, for minor personal privilege. And it will continue with it’s crocodile tears for atrocities of the past. But it still has to deal with new and old generations of land defenders, who are not going to be silenced by democratic rights and privileges, or temporary security in the form of land destroying jobs.

The effects of climate change are felt disproportionally in the global south as are often the effects of the drug trade which is all too conveniently held as a separate issue from resource extraction and land title. This all encompassing control over masses of people is the most horrible and large scale form of biopower to have been seen in history. Those that are forced to flee the places of their birth come to places like so called Canada to find themselves managed in a new form with a different type of fear. People who have recently migrated live in constant fear of incarceration. First and second generation youths face the jackboot of the pigs and the demonizing of the media on a regular basis, as women are often subjected to the worst of abuses that this society has to offer.

The working classes with legal status and citizenship, can at best expect mindless toil, weekend binges, distractions of all kinds, and meaningless strained relationships with each other. They can choose between the comforts of racism, sexism, homophobia, or “multicultural” patriotism. They have only not to slip and end up in prison or homeless and they have these threats to keep them on track.

It is in this context that we can find tremendous inspiration in the revolutionary youth of England, for their ability to express such amazing solidarity with each other, to reject the concept of rights and privileges that a democratic society has to offer, and to get down to the business of attacking all that our society holds in esteem. We can find inspiration in the people of the Pico-Union district in Los Angeles who when a pig murdered a member of their community they opted for Mayan justice, an eye for an eye, rather than the sham offered by the state apologists. We can find inspiration in the California prison hunger strike, initiated by prisoners in Pelican Bay for their shows of strength and determination in the face of the harshest of conditions. We can find inspiration right now in the Wet’suwet’en land defenders who will not, and will never allow the poisoning of the water in their territories.

There are many reasons to keep our heads up, and these examples are everywhere in far too many places to name. Of course we can still find inspiration in the events in Toronto back in June 2010.

You are all correct that there can never be justice in the processes that our enemies use, and it is relieving to see this pointed out in such a high-profile manner. Let us never become weakened by the ploys of our enemies, and let us never forget our comrades in this war!

Freedom to All Prisoners!

For an End to KKKanada!