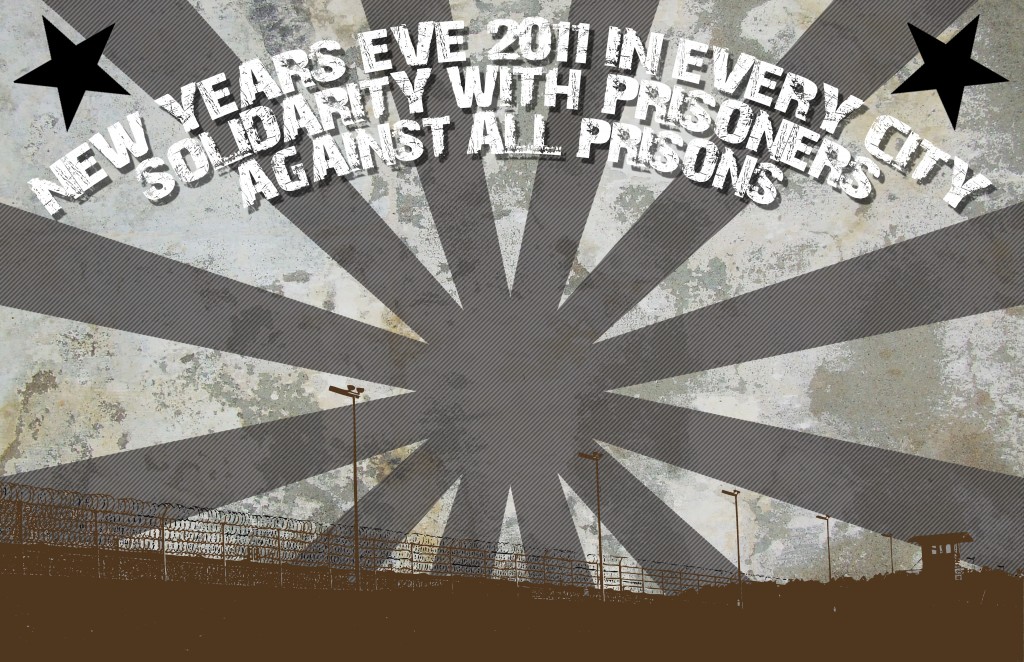 This event is inspired by the North American call out for a day of action against prisons in the New Year of 2011, which remains relevant unchanged:

Noise demos outside of prisons in some countries are a continuing tradition. A way of expressing solidarity for people imprisoned during the New Year, remembering those held captive by the state. A noise demo breaks the isolation and alienation of the cells our enemies create, but it does not have to stop at that.Prison has a long history within capital, being one of the most archaic forms of prolonged torture and punishment. It has been used to kill some slowly and torture those unwanted – delinquents to the reigning order – who have no need of fitting within the predetermined mold of society.

Prison is used not only as an institution, but a whole apparatus, constructed externally from outside of the prison walls. Which our enemies by way of defining our everyday life as a prison, manifest themselves in many places, with banks that finance prison development (like Wells Fargo, Bank of America, BNP Paribas, Bank of the West, and Barclays), companies that are contracted for the development of prisons (like Bergelectric Corporation, SASCO Electric, Engineered Control Systems, MacDonald Miller Facility SLTNS and Kane MFG Corp.), investors in prison development (like Barclays Intl. and Merrlin Lynch) to the police and guards who hide behind their badges and the power of the state.

Solidarity is not only an expression by way of our own revolutionary poetry which is defined by a developing anarchist analysis, but as an expression of actions put into practice within the social war daily. That is why we propose to others who have a certain reciprocal understanding of the prison world and the conditions it creates to remember this day, to mark it on their calendars. To locate points of attack. To not limit ourselves to just a noise demo, but proliferating actions autonomously from one another. That break the mundane positions we lock ourselves into by our own internalization.

To all our comrades known and we have yet to know. Just because we have not met, does not mean we do not act in affinity with one another. Our struggle continues not only on the outside, but on the inside as well. Prison is not an end, but a continuation. Through individual and collective moments of revolt, by the methods one finds possible. Like fire our rage must spread.

Against prison, and the world that maintains them.

For the social war.

In memory of those currently imprisoned.

This entry was posted in Communiques and tagged Canada, International, Prison, United States. Bookmark the permalink.