Hidayat is charged with attacking police stations in a demonstration; his detention period was extended and his health is deteriorating. Eat and Billy are members of the Informal Anarchist Federation – Indonesian sector, Long Live Luciano Tortuga Cell. This includes an update on their charges, the trial, which is expected to happen this month, and a call for solidarity with them around the trial (now!)

Hidayat has been charged by Makassar Police with damaging Police outposts during a demonstration supporting the people of Bima. Hidayat participated in a solidarity action that took place in Makassar on 26th December 2011 against the brutal police clearance of the anti-mining protest in Bima, where thousands of people had occupied Sape port. According to reports, he was arrested secretively in the crowds.

Hidayat’s health has been deteriorating. Symptoms of typhus, a disease he suffered from previously, have been returning. His friends have requested a deferment of detention so that Hidayat can receive treatment outside the prison.

We ask for solidarity and support from all those in struggle and fighting their own battles against the state and capital. Pass on this information, discuss it and let the fires of your solidarity burn. We should show everyone that not one friend will be left behind.

Reyhart Rumbayan (Eat) and Billy Augustan (Billy) have been imprisoned in Yogyakarta since 7th October 2011. 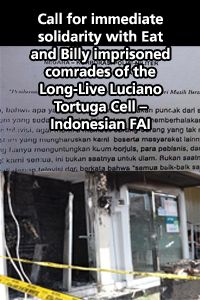 From Negasi-Negasi, translation from Hidup Biasa:

We have received another piece of bad news about the case of the two social combatants which have been imprisoned in Yogyakarta since 7th October 2011. They are being held in connection to an arson attack in which the ATM machine of a capitalist network, the Bank Rakyat Indonesia (BRI), was burnt.

According to information that we’ve received, the police have extended their period of imprisonment up until the 5th January 2012, but the reality is the two are still inside and have not been released. This means that the two insurrectionists have now been locked behind prison bars for 93 days and counting.

Secondly, the likelihood is that they will be charged with criminal accusations which have a maximum sentence of nine years in prison. They are both charged under article 187 (clause 1 part E and clause 2 part E) and article 170 of the Indonesian criminal code.

It is likely that their trial will take place this month, January 2012. However we still don’t know the date of their trial for sure. Because of this, we request help and solidarity in various forms from all who read this news.

Please spread this news far and wide and let’s show solidarity for those who suffer repression as for their attacks on oppressors.

Some information that may prove useful (US and Canada only):