Russia: Summary of past month’s increase of radical struggle

from blackblocg:    (follow the link to watch all videos embedded) 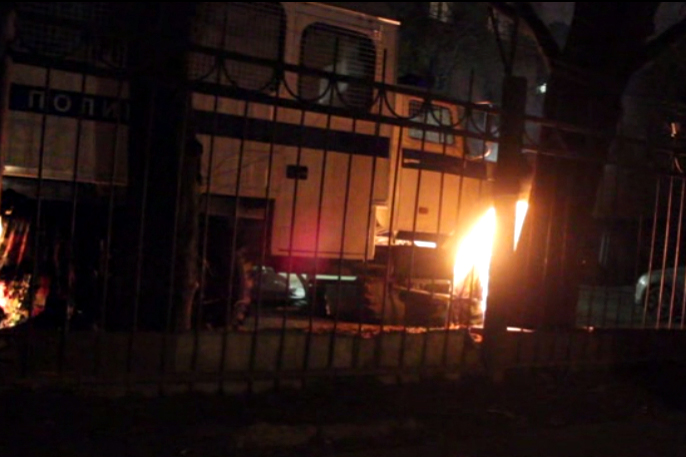 Falsified results of parliamentary elections seem to be a serious occasion for many thousands of malcontent to express their disagreement to authority during really mass demonstrations over Russia. At the same time number of direct actions related with sabotage of state institutions also grows by leaps and bounds…

10 – 13.12.2011 – In the urban districts of Moscow: Donskoy and Novogireevo windows were smashed in the offices of ruling United Russia party. Actions were held by anonymous people.

22.12.2011 – A group of anarchist insurgents has set on fire in the night office of United Russia party in Ivanovskoe district (Moscow).

In their statement comrades declared: To abolish Putin’s regime is not enough. New leaders of our country can not rule according to the people’s interests. The problem is a state itself. Our alternative is society based on principles of freedom, equality and solidarity. In such society all decisions will be made by people’s assemblies. This is the way to satisfy our own rights and interests and not the interests privileged minority of oppressors. It is time for resolute actions!

24.12.2011 – In Krasnodar town office of United Russia was attacked by anarchists in the evening. Comrades smashed some windows and shouted slogans before eyes of amazed people in the street.

31.12.2011 – art-collective Voyna (War) have burned on the parking a police vehicle for transportation of imprisoned.

03.01.2012 – And again in Kaliningrad – Molotov cocktail was thrown to window of United Russia office.

09.01.2012 – a central office of United Russia in North-Weastern Area of Moscow was attacked by anonymous.