In the past 4 months, police in the metro Atlanta area have been responsible for the deaths of at least 7 people. On January 28th 2012 around 8pm members of the Atlanta activist community, clad in black, wearing gloves, masks and hoods, began to converge on Troy Davis Park. They were gathering to march in opposition to policing. A call out had been made for a “Fuck the Police march”, in solidarity with Oakland, upon the reinstatement of Luther “Machine Gun” Lewis, the Union City police officer who killed 19 year old father, son, brother Arriston Waiters. The call out was basically a mimicking of the Oakland call out and shared the same guidelines which allowed for the destruction of bank and state property.

Upon arriving at the park, to the surprise of many, news cameras were already present and pointed at the massing group. Around 8:30pm the group, of about 40 people, began to march, in a box formation, with banners around the perimeter of the block, to create a shell in which protesters would be safe from police repression. Chanting “Hate Hate Hate/ The Hate inside of me/ All cops are bastards/ A.C.A.B.” the group marched north up peachtree, after receiving information that there was already a police barricade set up to the south of the park. Immediately, park property was painted with the circle A. As the march continued north up peachtree, the dynamic of this march became obvious, and it was one new to Atlanta.

Marching in formation, with the support roles of medics and copwatch following on the sidewalk, as well as some legal observers, it would soon become clear these protesters were more prepared than their police opposition. The police, however, were mobilized, as was evident by the fact that at the convergence of peachtree street and forsyth street, the begining of Atlanta’s downtown financial district, there was a police car blocking the way of the march. Out maneuvering their opposition for the first of many times that night, the protest took a quick left. The police headlights illuminated the protective banners reading “Fuck the Pigs” and “A.C.A.B.”

This turn took the march in an unexpected direction, past a Marta station. A few ne’er-do-wells left the protection of the block and raided this station. When they were back in the protection of the block the station had been painted and had lost a window to a hammer; an inadequate, tardy expression of the anger felt at Marta Police for shooting 19 year old Joetavius Stafford in the back.

The rowdy block of radicals continued down the road and eventually came upon the police precinct at the corner of Spring street and Andrew Young International Boulevard. After a vandal left another circle A on the precinct window the dynamic of the march was irreparably changed.

Immediately, seemingly out of nowhere, a large number of police appeared around the march, at least one white shirt was present. Grabbing at the vandals, the police narrowly missed them before they were back within the march’s protective shell. The police were obviously shocked at the new level of organization they had not yet encountered here in Atlanta. The march quickly became what would later be described by one of those in the block as a “game of cat and mouse”, but never have I seen a cat so afraid of a mouse. A more appropriate analogy may be that it was a game of mongoose and snake, and as the march slithered through downtown it was followed on all sides by cops.

At times barricades and even a mattress were thrown in the street to slow down the police. One hooligan was seen spray painting the helmets of motorcycle cops as they rode by. The battle’s deciding point however, was when, now farther from downtown and her ever-present cameras a scout found a route, through a parking lot, that lead to a back road. Once in the parking lot some people put up barricades that had been sitting by it’s entrance to try to prevent the police tail. A cop on bicycle eventually moved this barricade (along with most of the other ones) but not before it had allowed the march to make it most of the way through the parking lot. At the other end of the parking lot were two police cars, blocking the exit.

Tensions were high and many in the block expected the be captured, but at the last minuet, a call was made for a right turn that brought the group through the woods. Yet not free of police tails, though their presence had been much depleted, the block took a quick turn up a residential one way. However, for all the block’s advanced organization it was clear that an exit strategy was missing. Some affinity groups started to break away from the mass, to subtly disperse, but when others saw the block shrinking someone yelled to disperse and everyone, dropping banners and flags, ran. First big mistake.

Not only did everyone run, but everyone ran in the same direction. Strike two. Although some people were able to break away from the group, the large majority of people ran through a parking lot and ended up enclosed in an apartment complex’s back yard. Had someone not found the exit gate, there could have been mass arrests made. Eventually people began to break away from the mass of people, cutting through yards and wooded areas, shedding masks and jackets as they did, and ended up on the sidewalk.
However, despite the large scale success of the group, because of poor planning for dispersal, three comrades were arrested. Luckily though, thanks to the anonymity of the black block, they were only able to be charged with “obstructing the roadway” and “darting into traffic” both of which are only municipal offenses, and all three were out the next morning. Obviously, some work needs to be done to develop an exit strategy that can save all our comrades from arrest and not just those who are fit, savvy and above all lucky. Despite this failing, had the group not dispersed when it did, there was a large number of cops just up the road who would have been likely able to arrest the entire group.

After an almost 2 hour long game of ‘mongoose and snake’ the cops came out on bottom. Though it is clear that some work must still be done, protesters in Atlanta have entered a new stage in their development, and the cops can tell and the cops aren’t ready. 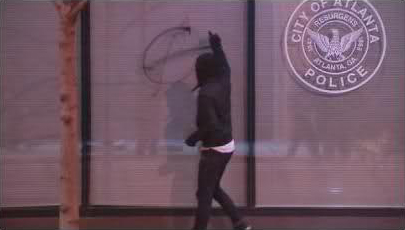 This entry was posted in Actions and tagged Atlanta, United States. Bookmark the permalink.