David Agranoff is a snitch in Green Scare case

* WOS note: It is worth mentioning that David Agranoff is believed to live in Portland, Oregon. There is a picture of him below.

Animal rights activist David Agranoff has agreed to cooperate with government as part of a plea agreement related to Earth Liberation Front crimes in Bloomington, Indiana, more than 10 years ago.

The prosecution is related to an April 30, 2000 arson in Bloomington, Indiana, that destroyed 14 pieces of logging and construction equipment.

According to an Associated Press report at the time: “Gas tanks were filled with sand, which was also packed into oil crankcases, police said. Fuel and hydraulic lines were cut, and a tractor-trailer filled with wood chips was set on fire. On the trailer had been emblazoned the words, ‘Go develop in Hell.’ The letters ‘ELF’ had been spray-painted on several pieces of equipment…” 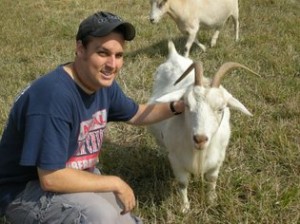 In March, 2011, Agranoff waived his right to indictment (which means agreeing that the government has reason to bring the charges against him). [Source: waiver of indictment]

In August, 2011, his attorneys filed a motion to push back his sentencing hearing, because: “The Defendant has not yet completed the cooperation he intends to provide to the government in consideration of a motion pursuant to U.S.S.G. § 5K1.1.” This is the section of the U.S. Sentencing Guidelines related to “Substantial Assistance to Authorities.” [Source: motion to continue]

That section of the sentencing guidelines states:

Upon motion of the government stating that the defendant has provided substantial assistance in the investigation or prosecution of another person who has committed an offense, the court may depart from the guidelines. [emphasis added]

In other words, the sentencing guidelines are explicit that providing information about oneself is not enough. “Substantial cooperation” can only mean implicating others.

Marie Mason is currently imprisoned on a 22 year sentence, the longest of any “Green Scare” prisoner, after Frank Ambrose cooperated with the government against her.

Ambrose had provided information about multiple Earth Liberation Front crimes as part of his own plea agreement for a reduced sentence of 9 years.

Agranoff’s attorney said that he agreed to cooperate because Ambrose and Mason are both currently imprisoned.

Five months after filing the motion to push back his sentencing so that he had more time to fully cooperate, Agranoff was sentenced to 1 year and 1 day on January, 2012, for misprision of a felony (knowing about the commission of a felony and failing to report it to the police). The court recommended he serve his time a low-security prison camp. He also received 1 year probation. [Source: judgment in criminal case]

As background, Dave Agranoff has been active in the animal rights movement since the 1990s. In 2005, he was subpoenaed to a federal grand jury investigating a speech by Rod Coronado. He and two other activists refused to testify, and he served 80 days in prison. He was the subject of much controversy for publicly supporting Justin Samuel, a known informant who fellow activists regarded as a “snitch” for cooperating against Animal Liberation Front prisoner Peter Young.

UPDATE 1: This is all deeply troubling news to many in the animal rights and environmental movements, and I do not take this issue lightly. I have been grasping for any bit of information that could help explain these documents in another way.

I have received many emails from others who seem to be grasping as well. These documents were previously sealed, and there is undoubtedly additional information that myself and others have not been able to access. Couldn’t it be possible, one person asked, that Agranoff only provided information about himself, and only himself, in order to get a reduced sentence?

I had genuinely hoped this was the case, but these documents, along with the explicit language of U.S.S.G. § 5K1.1 and associated case law, unfortunately do not leave room for misinterpretation.

The only way Agranoff could have received a reduced sentence without providing information about others is if 1) prosecutors generously agreed to recommend a one-year sentence, without any substantial cooperation, or 2) Agranoff negotiated a deal that would literally rewrite this section of the U.S. sentencing guidelines.

UPDATE 2: Agranoff’s attorney has confirmed that he agreed to cooperate against Marie Mason and Frank Ambrose. He says Agranoff chose to do this because they are both currently imprisoned.

According to Marie Mason’s former trial attorney, John Minock, prosecutors had previously agreed to not prosecute her for her involvement in the April 30, 2000 arson.

However, in a letter from prison to another activist, Mason said she had heard rumors that Agranoff was cooperating against her and she was very concerned.

I will post further updates as they are available (and will do so at the end of this post, rather than editing the existing text).