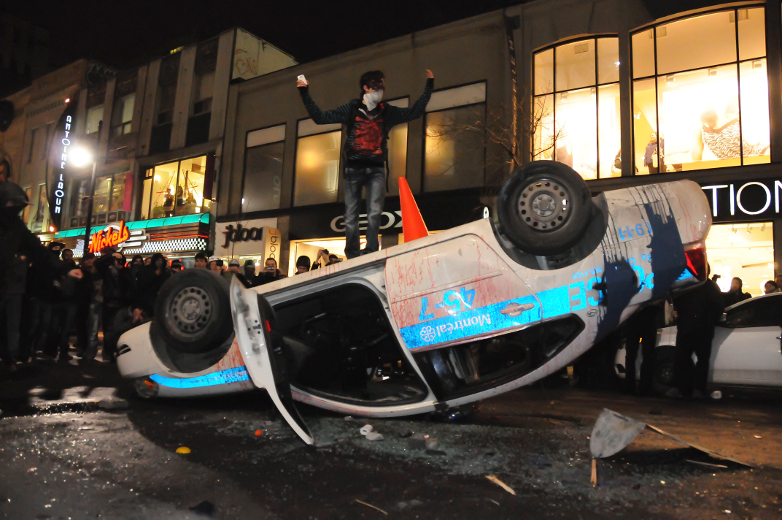 We flipped over a policecar on rue Sainte-Catherine. Prole stroll. Everyone was like WHOO! and happy kids were dancing on the chassis, happy cuz they were right to be happy.

We could’ve done better, but we did what we did, and this was the one day when the pacifists weren’t out in force and the people who get harassed by the police on a daily basis were letting loose and we got to share some knowing looks with some of the kids we haven’t seen since this time last year. This was our day, our night. Prole stroll!

Some comrades are in jail. Many people, perhaps not yet aware of the fact that we live in a surveillance society, did things that perhaps they should not have done with their faces unconcealed. What happens next is hard to say. Maybe the pacifists who got beaten with police batons when they sat in front of cops will have learned their lesson by now! And maybe anarchists can figure out a way to be half as badass as some of the people who were on the streets tonight.

The city is begging the province for more help with the security crisis: student demos everyday with more to come, and now this, the biggest March 15 in years, prole stroll like we ain’t seen outside of a hockey riot, what is sure to be a big embarassment to North America’s crowd control experts. THERE IS SO MUCH MORE TO DO. Onward to March 22, onward to May Day, onward to the continental general strike and the infinite strike! Until neither the SPVM nor any other police agency nor any other institution of domination exist, our work isn’t done.

And to the kids who looted Future Shop and got some PS3s, MAD RESPECT. We GET what we can TAKE.

Let’s save the lucid updates are for when the sun rises.

another communique, translated from french by sabotagemedia:

On the evening of March 15 (international day against police brutality) in Montreal, although riot pigs were all over, they clearly lost control of the city center for several hours.

Already in the afternoon, the Berri-UQAM station was filled with riot cops inside and outside, the sky with helicopters, patrols of pigs in the streets and later riotsquads and horsemen. Even with this display of force they werent up to the task. Proof that here as elsewhere revolt is more than possible. We can even thank in part the cops on Thursday for the riot, they fed it and gave it strength.

They gave it strength when they charged the demo of a few thousand people on Sherbrooke after twenty minutes of sloganeering and anti-cop graffiti, which resulted in several pacifist hippie parasites and the selfdescribed students with the boutgeois leftist mentality to go home. The ones who wanted more than to take a walk wondering what the fuck they were doing in another pathetic ritual of slogans, divided into smaller mobile groups that dispersed and reformed to fucked shit up all night long.

The cops also fueled it when they attacked with their arsenal the people downtown, on St Catherine. From then on the rage was unleashed on the streets. There were probably also many bored young people who are regularly targets of profiling and saw there a great opportunity for their turn to piss on the cops and it wasnt to long for it to come. As this same line of cops was advancing they took a volley of stones, bottles and a molotov and in an attempt to block the road further, the riot pigs fled from the crowd caming on each side. Moments later, while bins were flying down the street and into a few shop windows, the crowd fell on a brand new cop car, pigs included. The car was attacked with projectiles and you could see the terror and panic in the face of the two cops as they fled the crowd charging on the car. Later a vandalized cop car was flipped over.

By late evening a crowd gathered again at the Berri Square, where it had all begun, to leave once again. It’s when the crowd dispersed to Maisonneuve and Ontario that the cops surrounded people on the sidewalk to make a mass arrest. They held the crowd of about 200 people surrounded for several hours and then filled some buses and took them to a police station in Langelier, far from downtown, where they proceeded to identify people and give them tickets for “gathering endangering peace” and release them, but not before having photographed them one-by-one. There was also during the day and evening several random arrests and others targeted.

March 15th is every day!
The hatred of this rotten world and its cops, we carry it every day! 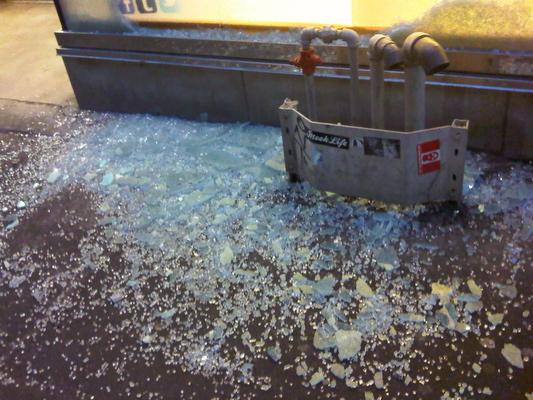 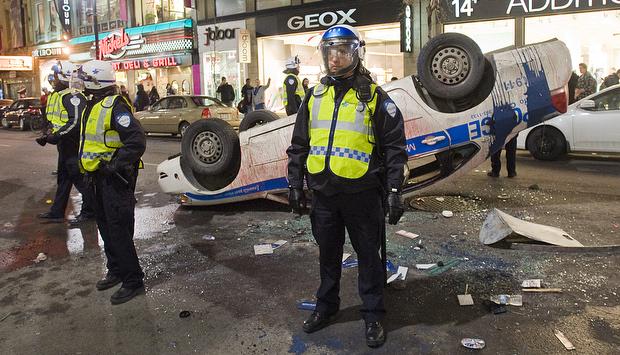 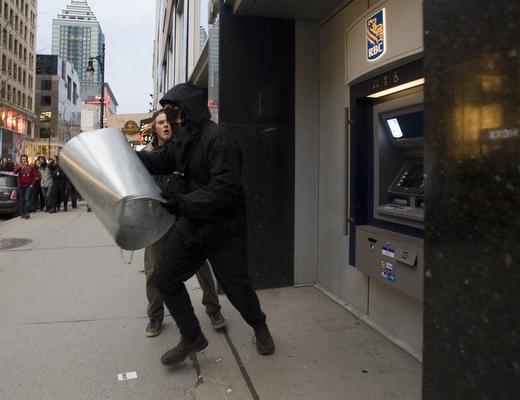 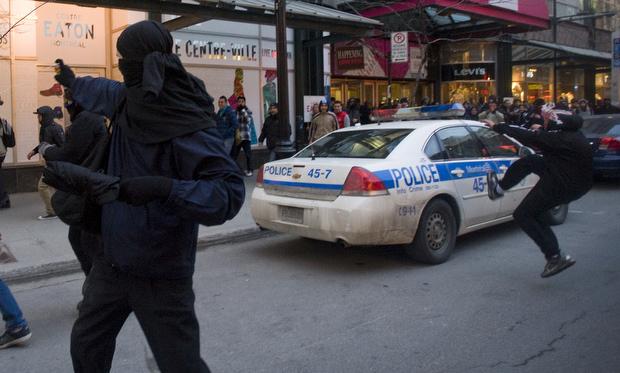 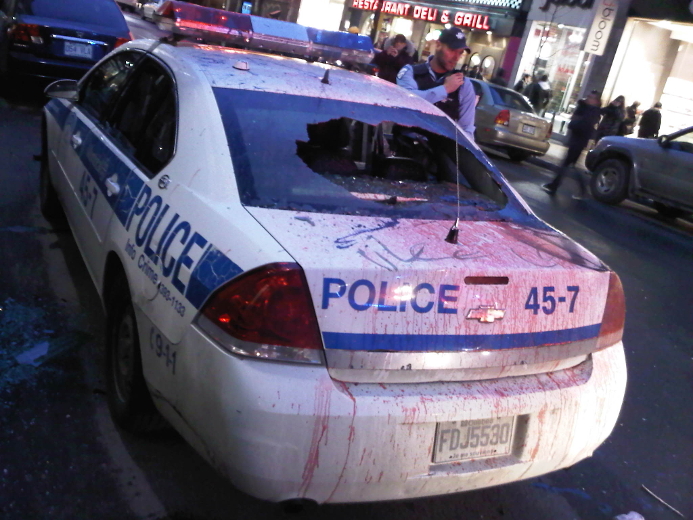 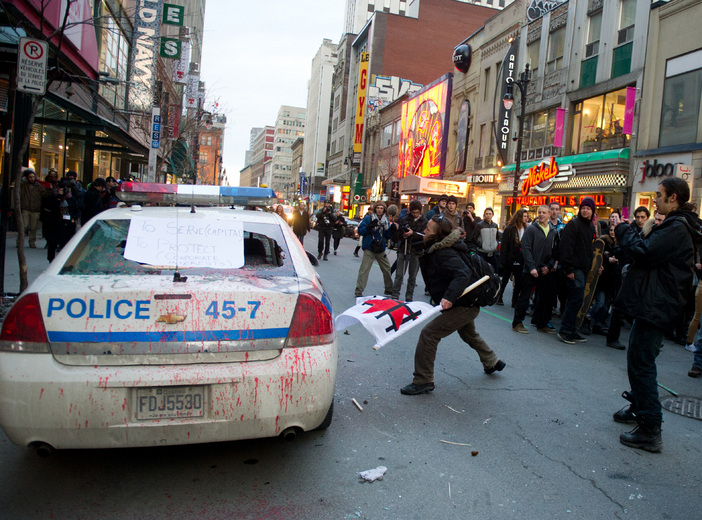 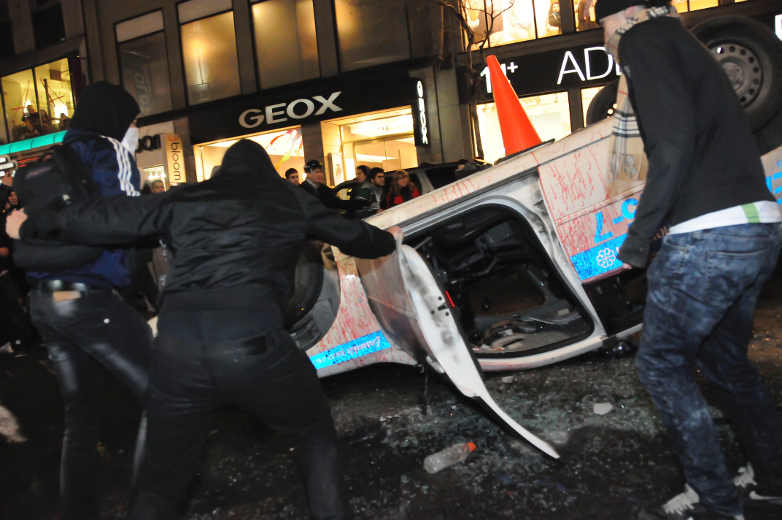 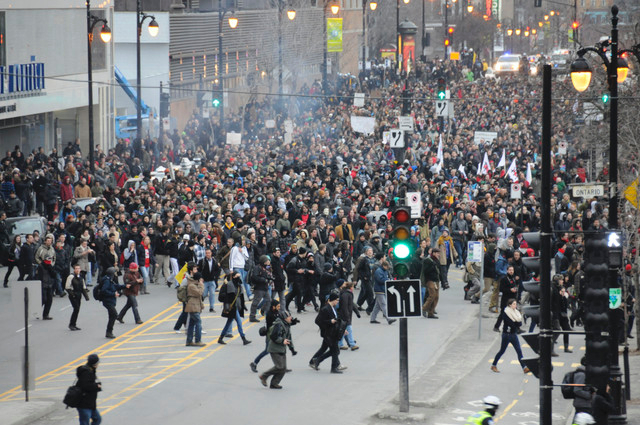 This entry was posted in Actions and tagged Canada, Montreal. Bookmark the permalink.