Posted on May 15, 2012 by Gabriella Segata Antolini

“In a society that has destroyed any possible adventure, the only adventure possible is to destroy (that) society.”

Capital is global, it expands through the whole planet, and if there once existed an outside, today there no longer remains the most remote possibility of some attempt of self-exile, other than that of apathy and resignation. It is clear that the spread of capital cannot be reduced to a mere geographic question or to its territorial comprehension, but rather that its generalization comes as given, above all, also through its representation and reproduction in every aspect of “life” or in its constraint (coercion), in each relation of humans with each other, or in each relation of humans with their environment and/or other species capital is present (is consumed) as cause and as effect, at the same time, whether ideologically and/or materially. Capital and State within the process/progress of civilization is the confluence and apogee of all the systems of oppression, domination and exploitation, in it they are perfected, adapted and integrated, and the historical stage inseparable from all these forms of authority (of class, gender, race, species, etc) has not been nor will be anything other than society.

With the beginning of civilization, that is, from the formation of the first societies, when violence was organized and systematized, the first experiences of resistance and insubordination must have begun. Along with the development of the “universal/official” history that serves power as a normalizing element, of social control and propaganda, there is a memory, a story that grows (to the extent that we ourselves take care of it) and the power tries to silence it, since it is a living story of action that is not neutral but rather serves as a tool of analysis and learning, that feeds and motivates those who hate because they see/feel the inherent dynamics of authority and domestication that progress and democracy try to hide, those who question this reality and do not survive in the inertia of work and consumption, those who do not tolerate the daily violence of the system and understand the validity, necessity and even the urgency of a liberatory violence against the hegemonic violence of Power. It has always been, and will continue to be, dangerous for those who perpetuate the present conditions of subsistence, that there are rebels who persist in propagating ideas and practices that question, negate and destroy this reality.

We are everywhere, while capital will continue stretching into the deepest corners of the world, we will strike it. In effect, while the owners of multinational corporations can exploit living beings and destroy nature without their bodies being present, we can also directly attack their interests. Our struggle is international, we draw on past experiences all over the world, and today we do not remain indifferent to what is happening in other lands, whether it is when they lock up our comrades in Greece, Spain, Italy, Chile, Indonesia or when they kill hundreds of prisoners in Honduras.

Likewise we reject with deep disgust the elections carried out in France last week (and those that are coming anywhere else) when the citizens went to vote for the socialist candidate, feeling themselves part of the great “processes of change,” but, in reality the fact of going to vote only rejects the will of perpetuating the relations of exploitation/domination. Democracy is the illusion with which they citizens can feel themselves included in political affairs, but keeping the logic of power and delegation intact. These observations are not new, and if the citizens keep voting and “living democratically” it is because for them it is much more comfortable to keep reproducing these relations of power; even though in this sense they “exploit themselves,” voiding themselves of responsibility and giving charge of their life to the bureaucracy and institutions of Power.

In this sense, to take ourselves up as anarchists is to begin an individual revolt, it is to question and recognize the different daily aspects — subtle or obvious — that oppress us and to act to destroy them, it is to enter into tension and to attack the reality that surrounds us, with what we have at hand, since there are no options left to us other than to take ourselves up in war against society or to let everything continue the same. As anarchists in war we take up the desire and the necessity of creating situations that put into tension and interrupt the boring and stifling normality of power, of vindicating and propagating our values and positions such as internationalism and revolutionary solidarity, without pretending to construct “conscious” masses nor reform or improve this reality, but rather with our affinities to permanently attack from all the fronts that our imagination allows us to create.

Today we claim responsibility for the attack with an explosive device made of two sticks of dynamite, fuse and chemical initiation at the Imcruz auto dealership of French import Renault autos, located on Av. 20 de Octubre, in the city of La Paz, Bolivia.

With this action we want to send a warm and fraternal greeting to the compañerxs members of the R.O. CCF: Christos and Gerasimos Tsakalos, Paniagotis Agirou, Haris Hadzmihelakis, Damiano Bolano, Giorgos Polydoros, Giorgos and Mihalis Nikolopoulos, Olga Ikonomidou and the anarchists Theofilos Mavropoulos and Rami Siriano imprisoned in the prisons of Greece. Strength also to the compañera Stella Antoniou!

We do not forget to greet the comrade Luciano Pitronello and the rebels in Peru, Chile, Indonesia, Cataluña and Italy. 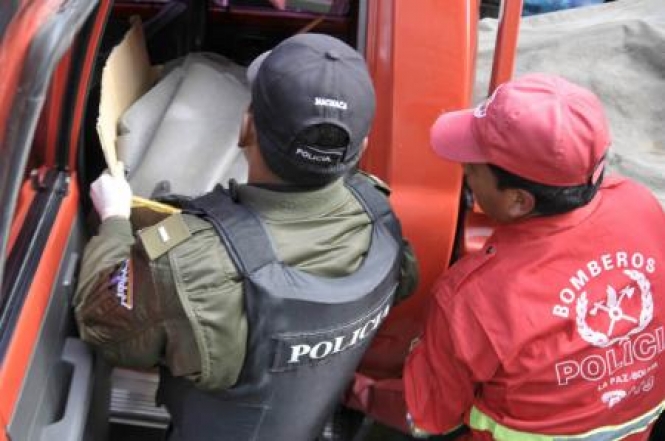 1 Response to Bolivia: Claim of responsibility for incendiary attack against Imcruz car dealership