Bolivia: Anti-authoritarian individuals and collectives against the arrest of anarchist activists

Posted on May 31, 2012 by Gabriella Segata Antolini

AGAINST THE INCARCERATION OF THE LIBERTARIAN COMRADES IN BOLIVIA

As autonomous collectives and individuals of Cochabamba in the face of the arrest, the raids of their homes, abuse and false accusations of the comrades Nina, Henry, Vico and Renato, we denounce:

The politics of state terrorism which discredits, intimidates and arrests the dissident voices at the impositions of this government, which evidences itself in the case of the indigenous comrades of the 8th March falsely accused of kidnapping and attempted murder when they demanded their right to free transport and water; the torture of the ill Leonor Boyan when she protested for her workers’ rights; the kidnapping and extemporaneous arrests of the indigenous authority Cancio Rojas for defending the territories of his community against the interests of the transnational mega mining company and the violent police intervention against the community of Mallku Khota; the Cochabamba university students imprisoned for throwing balls of paint at the provincial government; and the maximum expression of this state violence, the police repression of the 8th Indigenist March.

Within this logic of intimidation and criminalization of protests, on this May 29th the libertarian comrades were arrested and falsely accused of terrorism for daring to think and live differently. The comrades arrested violently for supposed acts linked to international terrorism are not part of the group FAI-IRF, who have claimed the attacks. They are using as supposed evidence their participation in meetings, the tendency of zines and materials of anarchist and libertarian content, wiphalas and patches, labeled as political materials, which in reality express our social commitment.

During the unjust hearings the power of the private bank supported by the government is made evident again, as with a body of more than eight lawyers they confront the comrades, whose families were denied entry.

These tactics of discrimination and persecution are appropriate to fascist states, which try to sow fear between those who defend life and land and are part of these social struggles now and forever. We see with great indignation how the government of Evo Morales, “popular indigenous,” in its thirst to perpetuate itself in power, uses these farces to defend the interests of the large transnationals, the banks, business owners, land owners, dividers of land into lots, and the symbols of capitalist power, repressing, arresting and discrediting the persons who resist this neoliberal, extractionist, patriarchal and violent system.

Our networks are of solidarity, resistance, of knowledge sharing, autonomy and community, they are not “terrorist cells” as the government tries to confuse and the communication media try to (mis)inform, in order to erase the conflicts that are living in this country due to the contradictions of the government, which says it defends the freedom of expression in the “multinational” state, in respect to diversity, peoples’ rights and the rights of the mother earth, while it violently imposes politics of destruction and persecution.

In this context of the OEA Summit and the arrival of the indigenous Marches to the city of La Paz, they are looking for smoke screens and scapegoats through fear, diverting attention away from the problems that have brought the social struggles to massify in Bolivia. Moreover, a decree of “good” government has been declared, which prohibits meetings and demonstrations, wanting to give a false image of harmony in Bolivia.

We ask ourselves, Where are the sanctions against those responsible for the repression of the indigenous march? Why is Goni not in Chonchocoro? Why is Manfred in Miami? Why is Quintana the minister?

If all those who are anarchists, libertarians, feminists, anti-authoritarians, anti-capitalists, vegetarians, who think, question, live, resist and re-exist these logics of power and domination are “terrorists,” the prisons will have no room for the people.

YOU ARE THE TERRORISTS – STATES, CAPITALISTS, OLIGARCHS, PLUNDERERS!!!

IMMEDIATE FREEDOM FOR OUR COMPAÑERXS.

SOLIDARITY FROM ALL STRUGGLES.

We make a call to mobilization and support against these criminal politicians.

In clear resistance, Cochabamba, May 2012 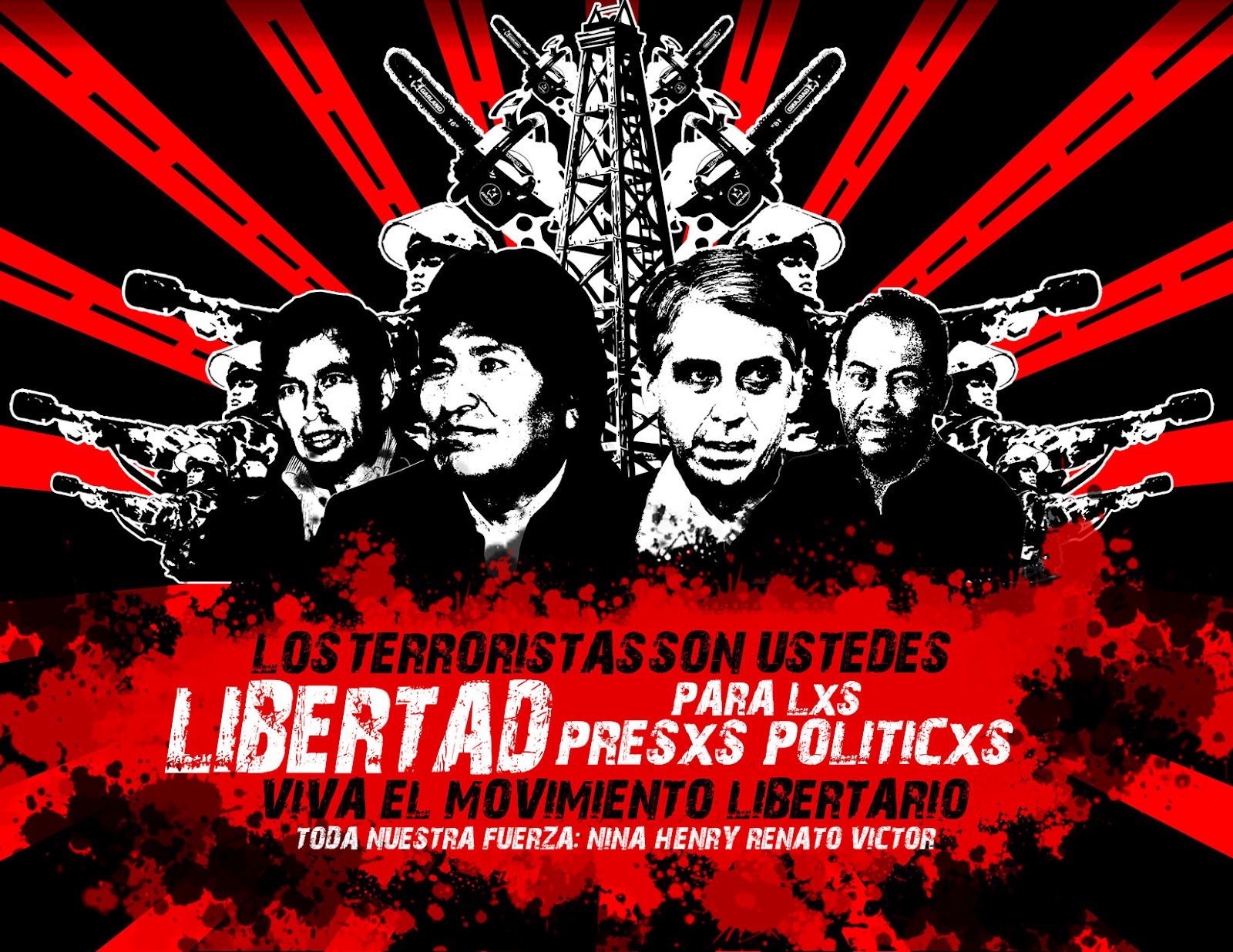 text: You are the terrorists
Freedom for the political prisoners
Long live the libertarian movement
All our strength Nina, Henry, Renato, Victor 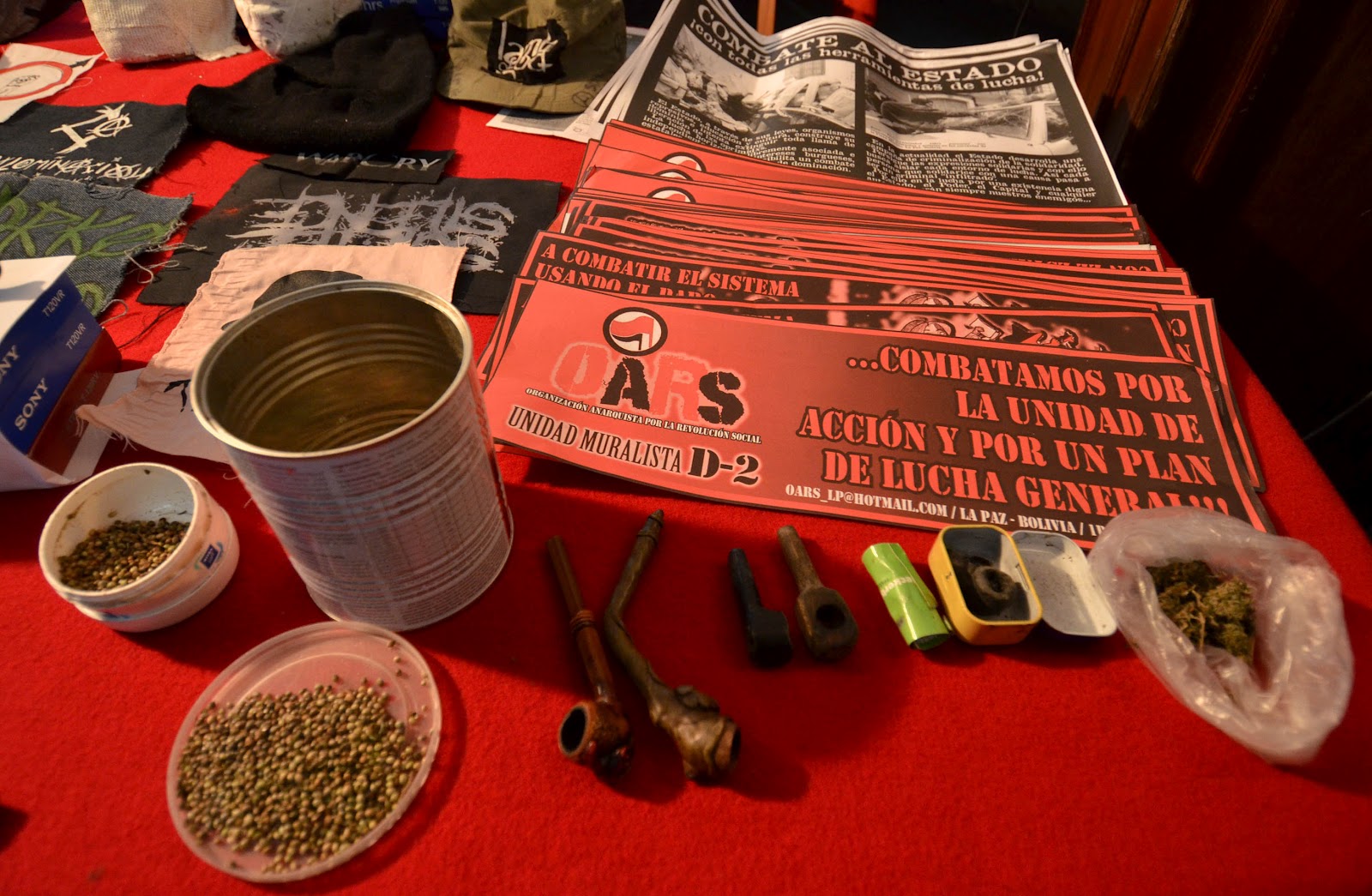 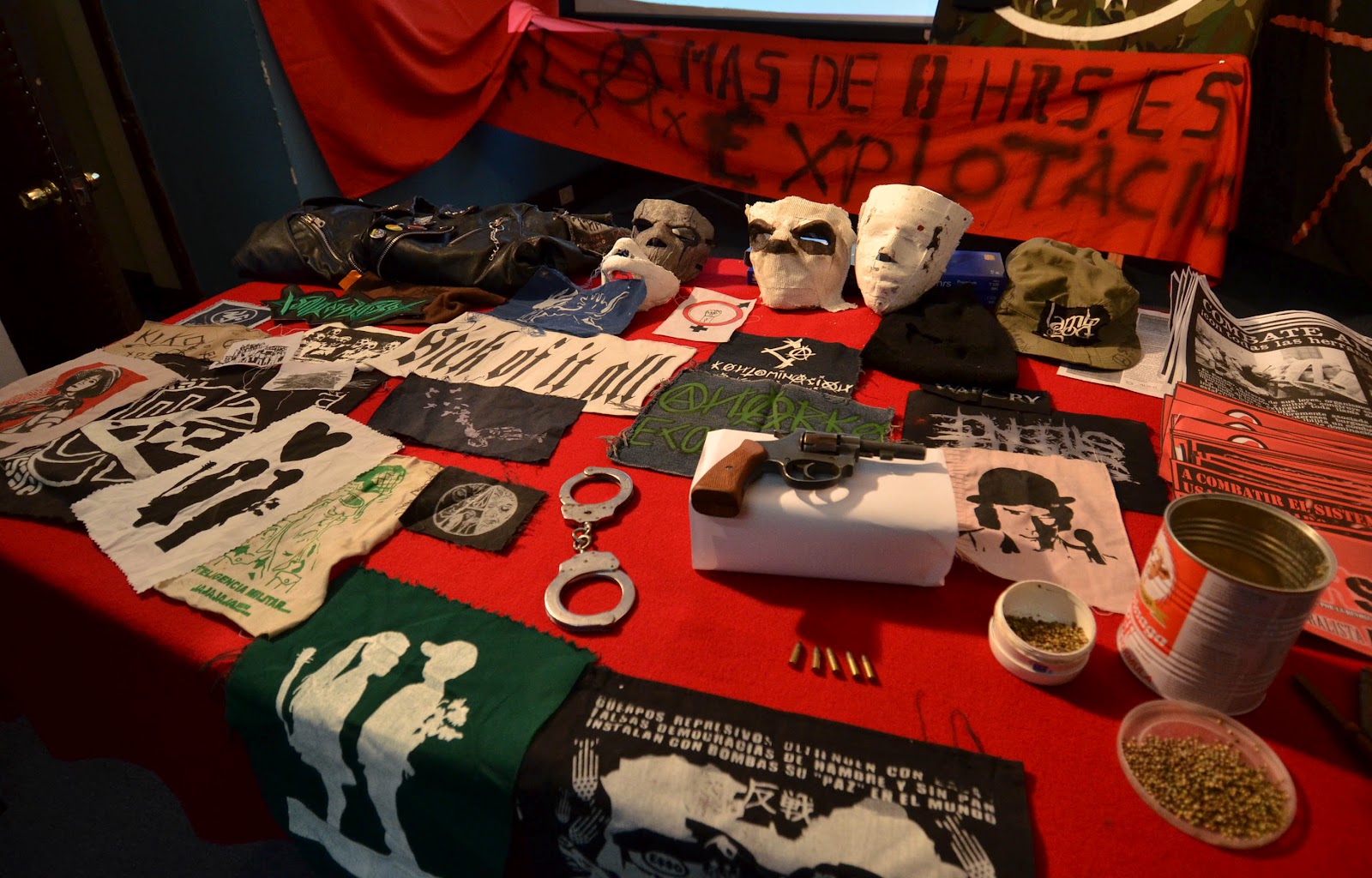 The “evidence” against the comrades gathered in the raid

This entry was posted in Communiques and tagged Bolivia, Henry Zegarrundo. Bookmark the permalink.

1 Response to Bolivia: Anti-authoritarian individuals and collectives against the arrest of anarchist activists