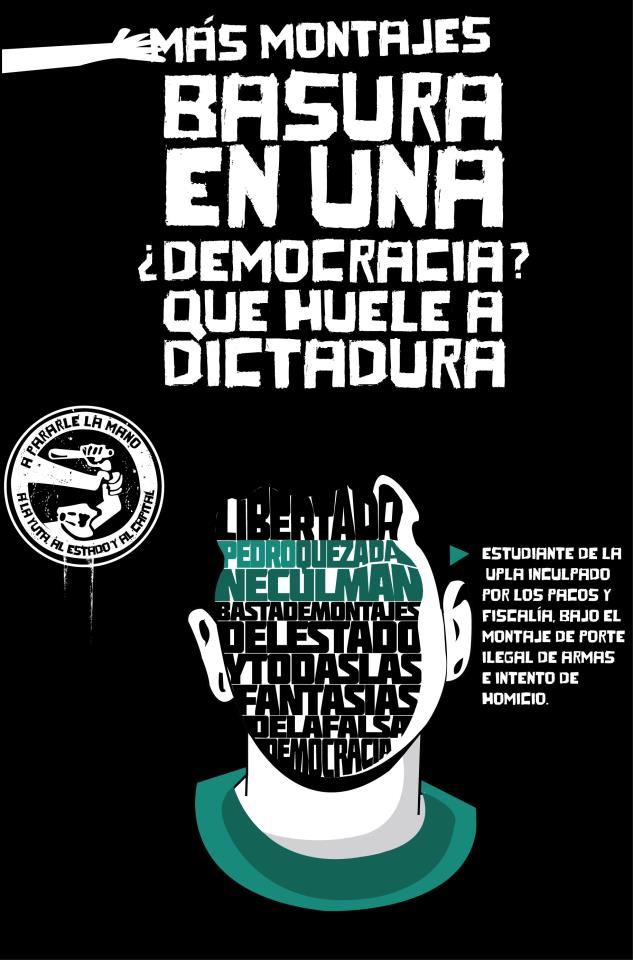 Today, May 31, the appeals hearing was held in which the defense of our compa and friend Pedro Quezada Neculman presented IRREFUTABLE evidence of his innocence in the frame-up orchestrated against him.

Today our compa finds himself imprisoned for more than a month and a half, accused of throwing a molotov at a cop of the special forces in a demonstration in the Playa Ancha University (UPLA) on the day of the combatant youth.

The judge Ingrid Albial dismissed the presented evidence and reaffirmed the cautionary measure of preventive prison until the end of the investigation against our comrade, we point out as well that this is the 3rd appeal denied by the courts.

Hydrocarbon tests were made on our comrade’s hands which turned up NEGATIVE therefore concluding that he did not handle a molotov, and also there were studies of different photographs in which it is shown that it was not him who threw molotovs at the pigs.

We call all the comrades to act in solidarity with el Negro, that our shouts and actions may pass through the cold concrete of his cell and that he may finally embrace his comrades in the street.

FROM TOMORROW FRIDAY JUNE 1ST UNTIL OUR COMRADE’S FREEDOM
WE CALL TO DAYS OF AGITATION AND DIFFUSION FOR EL NEGRO’S FREEDOM!

This entry was posted in Updates and tagged Chile, Pedro Quezada Neculman. Bookmark the permalink.