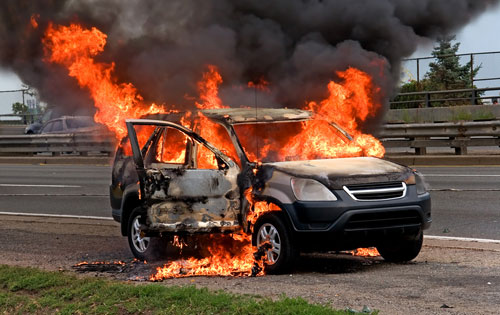 Over 70 sabotage actions on the MAT construction.

In light of the news of the moving forward of the Very High Tension Line (MAT), we want to make public:

On Tuesday, July 1st, an all-terrain vehicle in the service of Tensalm, a company subcontracted by the Spain Electrical Network (REE), was burned, destroyed by the flames in the night within a  Sarrià de Ter hotel in the Girona province.

We claim all the actions detailed below, a year after we began our work. All the actions have been systematically silenced by the communication media and for this reason we want to make public that, in denial of the lastest news from the daily El Punt, we have caused months of delay to the work and thousands of euros of damages and losses to REE.

We vindicate sabotage as a fundamental part of the fight against the imposition, the infrastructure that sustains the system, and all the social, laboral and economic mechanisms of wild capitalism.

The whole world is capable of carrying out sabotage, a tool that has belonged to the oppressed class for a long time. It can be as simple as unscrewing the bolts of any tower, and we encourage everyone who is against to act in the way they see as most fitting.

We publish this list of actions in order to incite sabotage, to give ideas, and to bring to light what they didn’t want to be known.

December 2013:
– Attack on the representatives of REE and their cars

February – April 2014:
– Guide cords for running cables repeatedly cut
– Multiple unboltings of the bases of the MAT towers
– Attack on the security guards of EULEN company, and broken windows.

May 2014:
– Cords cut
– Destruction of 2 generators
– 2 all-terrain vehicles of REE sabotaged
– Sabotage of support structures
– Several unboltings of the towers

This is an incomplete list since it is impossible to know all the actions that have been carried out, or who has done them. The bolts will be sent to the press, in order to put pressure for the publication of this manifesto.

No MAT, no TAV, no nuclear and no to the system that sustains them!

Jabalís and friends of the forest

This entry was posted in Actions and tagged Catalonia, Spain. Bookmark the permalink.