Chile, Santiago: Claim and clarification of the latest incendiary/explosive attacks 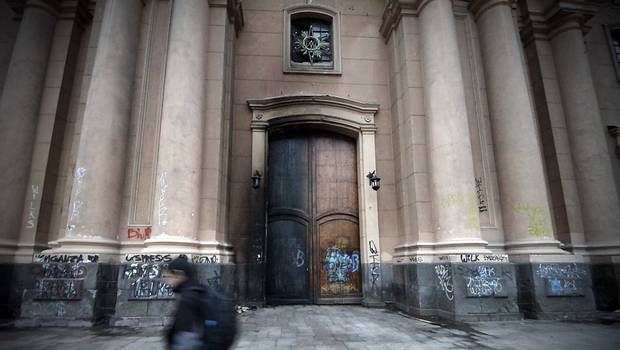 The press, in turn the government, prosecutors, police, and media personalities are reborn from silence in the search of cameras along with threatening declarations. All together they aim their equivocal darts, publicly asserting an improvised device was insanely placed in a kindergarten or outside the house of a CEPAL member, on an insignificant sidewalk.

We assume the complete political responsibility for the device places at the doors of the Santa Ana church, and in the same fashion, assume the responsibility for the construction of the device found at Alimirante Hurtado street, but deny absolutely that it was installed in a planned or premeditated manner at the above location. The device was placed more than 5 blocks away at the doors of another symbol of the principle of Authority, lamentably due to problems with the clock system it did not detonate, and we do not know the curious idiot who moved the bag with the device to the place where it was deactivated.

Through conviction we are true to our values. Values which recognize an enemy armed, prepared, and ready to attack, that enemy which appears to us in the street not by fate nor from nothing, appears to protect this order, the rich, exploiters, their symbols, institutions and spectacles. Is is an enemy we choose to attack, taunt, and leave fearlessly before the determination of continuing a fight which historically places us face to face when the radicalization of our actions penetrates their pride and escapes from their hands. Our values never have attempted to attack civilians, nor wound, or cause harm to ordinary citizens. Our values are not terrorism. The State and Capital are those who brandish terrorism from behind their armed branches.

As a Revolutionary Cell we see clearly who is the enemy, who gives it shape and projection in their advances. The enemy understands the signs of war. They advance, project themselves, and display on our heads. Before the threats of the Enemy, our answers can not wait.

Ministers and Prosecutors are calling to the four winds for the necessity of reinforcing security, patrols, the collaboration between the Carabineros, PDI (Investigative Police) and the ANI (National Agency of Information)…Now the State-Police are oiling their assault rifles, preparing raids, trials, and sentences…the Jailers are already preparing cells where they will imprison those submissive.

As insurrectionary combatants and with a sincere promise to anarchic memory we should be up to the circumstances, without taking a step back in the struggle against Power. Positioning our approaches and aiming our weapons aggressively, making it clear that the hostility is until the death.

The motives for acting remained clear in the moment. Action is our gesture of solidarity with compañerxs Francisco Solar and Mónica Caballero, kidnapped by the Spanish State. In turn, we feel the urgency of sending our strength to compañero Nikos Maziotis, who was captured by Greek Police, after 2 years of clandestinity with the combatant and compañera Pola Rouppa. We know that the compañero will maintain an irreducible position of conflict and combat inside prison – from inside or outside the prisons the struggle for us is a question of honor and dignity which will continue.

The violent and break neck advance of Social War will not subside in the face of any threat or repressive exercise of the State-Capital. Our acts construct the insurrectionary path towards Total Liberation.

Until the last bastion of the prison society is destroyed!! 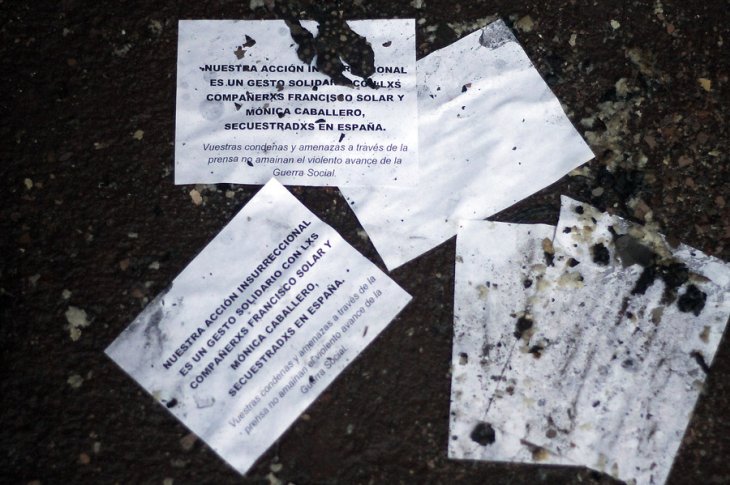 Pamphlets were found at the site with the following text:

“Our insurrectionary action is a gesture of solidarity with lxs compañerxs Francisco Solar and Mónica Caballero kidnapped in Spain.

Your convictions and threats through the press will not stem the violent advance of the social war.”

Note from la rebellion de las palabras: Recently an anarchist group called the Felice Orsini Cell adhering to the FAI/FRI claimed at least two attacks with explosive and/or incendiary devices in Santiago, Chile. Of these 2 attacks, the first consisted of an incendiary/explosive attack against the Santa Ana church, with an improvised device composed of gas cylinders which after activation burned and detonated in a large ball of fire on the night of July 22, the temple was empty and no one was hurt although it succeeded in setting the door on fire. As for the second attack, it was widely spread by the inquisitors of mainstream media seeking bait that (supposedly) it was carried out against a kindergarten. The bomb was deactivated in time and bourgeois press organized and created an uproar, demonstrating yet again that anarchists are terrorists capable of attacking a kindergarten with explosives (clearly a despicable act, but one that works well ultimately for the israeli friends of the chilean State, although that of course is never shown on TV).

This has led to some compas in Chile (at least a few on the internet who were able to be reached, while taking into account the limitations presented by the Internet in relation to these questions) thinking that this was a false flag operation by the ANI (National Intelligence Agency) as this would not be the first the first time such creepy tactics have been deployed.

However, a communique received through email clarified all this, and as they claimed responsibility for the first attack they firmly denied responsibility for the outcome of the second, as it was said the bomb was found and deactivated in between two kindergartens. According to the compas, they constructed the bomb but their target was not that, and they did not place it there as they left it at its real target (which was located over 5 blocks away) and someone with few brains or little appreciation for their life recovered and transported it to where it was later found and deactivated (a undercover police entity looking for an opportunity to criminalize anarchism?) In light of this the bourgeoisie press staged all their sensationalism, aiming to illegitimate every act that violates the laws of the rich and takes up the determination to act assuming the possible consequences.

Nonetheless, after explaining all of this as an introduction and to contextualize, the intention is not to speak for the compas as they themselves have explained all of this confusion in the communique above.