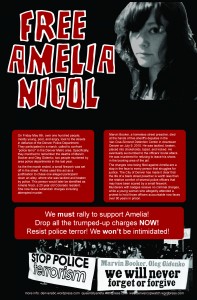 Today a banner was dropped over I-25 near downtown in support of Amelia Nicol (learn more about the case here: http://denverabc.wordpress.com/?…) It was dropped at approximately 7 am, 1 and a half hours before her court date and right as morning rush hour was picking up. It was latter seen from said highway and was entirely visible and looked fabulous. Hundreds of people undoubtedly saw it. It was a red banner painted in black letters “Free Amelia Nicol! Shame on DPD.” With a circle A for the A in Amelia!
It almost seems like a prophetic act, given that today at Amelia’s court date most of the charges were dropped. She will, most indisputably not go to prison for 90 years as the prosecution would have liked her too. Indeed, even the judge said, dismayingly and shaking his head that he thought that she had been over charged. The court room was packed and filled with hushed laughter at the ludicrous testimonies given by the police officers and detective that served as witnesses.

Banner drops are easy and fun, effective in catching people’s eyes, educating people on issues that they may not know about, showing solidarity, and hopefully changing a few minds! I encourage that everyone partake in such actions and any actions that show support for those doing time and suffering in any other way from the overhanging power structures of capitalism and the police state.