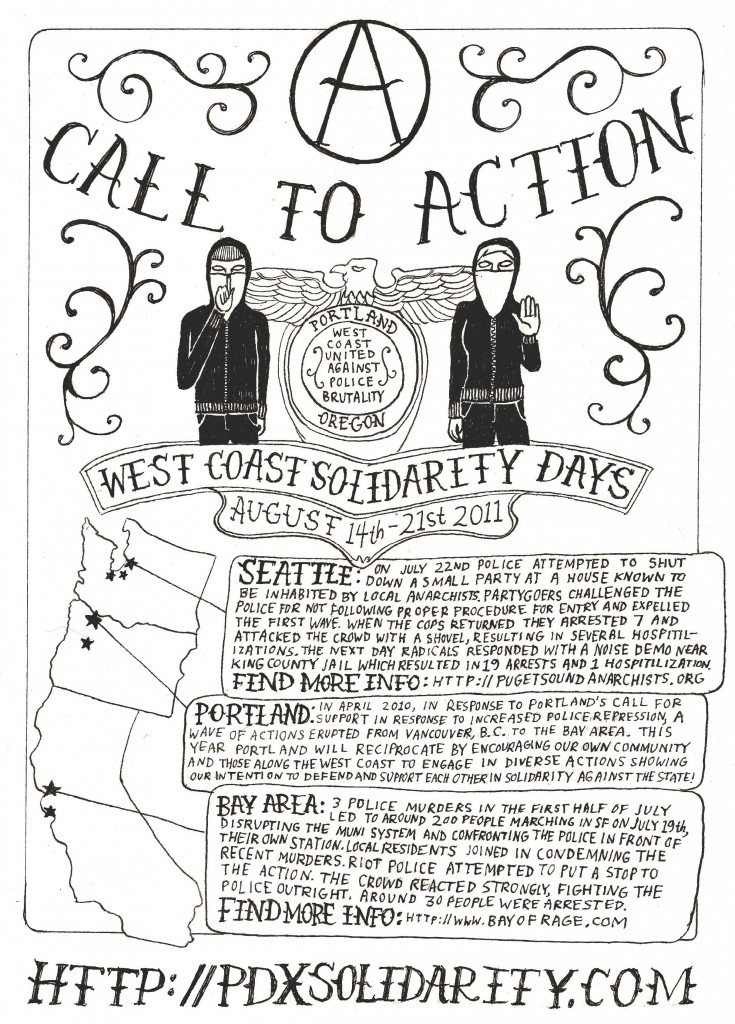 This is a call for actions in defense of ourselves and our comrades in resistance August 14th-21st.

Even set against the background of state inflicted violence and outrageous exploitation that colors our everyday experience, the events of the past few months have been a frightening reminder of the State’s desire to maintain normative authority at the cost of our lives. In a 2 week period alone three separate individuals in California have been executed by the police in public and without apology.

On July 3rd in San Francisco, Charles Hill was shot and killed 23 seconds after the arrival of two BART cops responding to a call about a “wobbly drunk.”
http://www.sfexaminer.com/local/bay-area/2011/07/bart-shooting-video-sho…

On July 5th in Fullerton, CA, Kelly Thomas, a schizophrenic houseless man was beaten to death by the police. There has been no reported motivation.
http://www.inquisitr.com/130701/mentally-ill-homeless-man-beaten-to-deat…

On July 16th in San Francisco, Kenneth Harding, a 19 year old black man was shot 10 times in the back and neck during a pursuit with the police in which he’d evaded a $2 MUNI fare.
http://sfbayview.com/2011/why-should-you-die-for-a-transfer/

The audacity of such acts necessitate a swift response. Our rage is as necessary as it is justified. When we coordinate and carry out a broad diversity of actions working towards the same goals our power increases exponentially. In light of this fact and in response to these deeply disturbing, acts radicals and others opposing the police state have been demonstrating their resistance in a number of ways ranging from banner drops to the destruction of state property and more.

On July 19th, around 200 people marched in San Francisco, seriously disrupting the operation of the MUNI system and confronting the police in front of their own station. MUNI machines were trashed and the police station came under attack. The banner leading the march read: “They can’t shoot us all; fuck the police,” and the ranks swelled as local residents joined in condemning the recent murders.

At the above mentioned San Francisco march, riot police attempted to put a stop to the action by surrounding and “kettling” around 30 people, detaining them all for arrest. The crowd reacted strongly, fighting the police outright in a brazen show of collective self-defense. Most of the people arrested were charged with misdemeanors, while one individual was charged with Felony Assault with a Deadly Weapon and Felony Vandalism.

On July 22nd, in Seattle, in what appears to be a repressive response to increased anti-police activity, cops attempted to shut down a small housewarming party attended by anarchists. Party-goers were able to expel the first wave of officers by firmly exerting their legal rights. Backup was called and a large second group of police invaded the property with the intent to start more trouble. Cops started indiscriminately tasering, and beating people, going so far as to swing a shovel at peoples heads.
Several people were hospitalized with injuries ranging from puncture wounds and bruises, to multiple concussions, to a head injury so bad it required 6 staples to close. Seven were arrested.

The following night, the community responded by holding a noise demo in front of the King County Jail in a show of solidarity with the 7 arrestees. Police surrounded this solidarity action and chased down fleeing protesters, arresting 19 and causing another severe head injury requiring staples.

OUR CALL TO ACTION

On April 8th and 9th of 2010 the Portland radical community asked for support from West Coast comrades in response to increasing police repression. An eruption of actions from San Francisco to Vancouver, B.C. occurred during this time, displaying the emergent strength of our ever developing coastal support network. This year Portland is reciprocating by encouraging our own community and those along the west coast to engage in a diversity of actions demonstrating our intolerance for the cruel, coercive and exploitative nature of the state, and our intention to defend and support one another across arbitrary national and international borders, and to add our resources to those of
our comrades on the west coast, strengthening our bonds and movement.