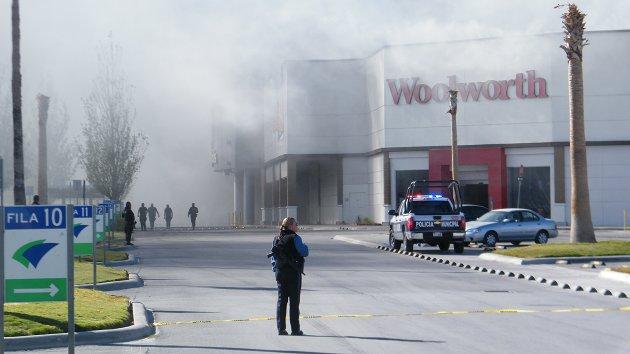 To all like-minded arsonists and antagonists, the fifth communiqué from the Mexican Fire Cells Conspiracy/Informal Anarchist Federation (CCF-FAI/Mexico):

Neither exasperated, indignant, nor broken! Arsonists at war against domination!

Solidarity with the 32 people arrested yesterday!

Against the system of domination!

Yesterday at 9:21 a.m., liberatory fire burned once again, destroying merchandise. The Fire Cells Conspiracy (CCF) faction of the Mexican Informal Anarchist Federation (FAI-M), Chihuahua section, gave life to antagonistic fire at the Woolworth in Las Torres shopping mall, also setting fire to several multinational capitalist entities here in Ciudad Juarez in solidarity with the 32 protestors arrested yesterday by the forces of repression. Thirteen shops were destroyed, as Woolworth and Wendy’s were consumed by antagonistic fire. With this attack, we also join the campaign for the release of comrade Gabriel Pombo da Silva, and we show solidarity with comrades Cristobal Franke, Francisco Moreno, Gonzalo Zapata, and Zerman Elias in Chile, our comrade Tamara, the comrade prisoners from the Fire Cells Conspiracy in Greece, and all anarchist comrades being held captive by the state in Mexico and the rest of the world.

We continue to strike the system of domination with coordinated international antagonistic struggle. Anarchist struggle is possible, and it is a weapon of solidarity with our imprisoned comrades. We leave behind the fear and indignation of the broken, and make the shift to decisive struggle against domination. We leave behind discourse and move on to practice. Our act of solidarity with the arrestees here in Ciudad Juarez doesn’t mean that we support the pacifist strategy of the indignant, nor does it mean that we stand in solidarity with their broken proposals. Our action isn’t in support of the Citizen’s Cause or any other leftist, Perredista, or Zapatista NGO. Our action is a warning that all attacks by domination will have a response.

We are all the Fire Cells Conspiracy!

The Fire Cells Conspiracy isn’t an ORGANIZATION. Rather, it is the antagonists’ expression of rage and contempt toward domination and its institutions.

By spreading the Fire Cells Conspiracy, we continue the war on the existent order.

All our solidarity with comrade Gabriel Pombo da Silva!