Update 4:51PM 12/20: Here is some pretty solid video of last night’s action. As we speak, several of those arrested on minor charges are in the process of being bonded out.

Update 1:15PM 12/20: Important tweet from Denver ABC: Clarity: DABC is not coordinating legal support for #occupydenver. Members are aiding those from OD working on legal in a limited capacity.

Members of DABC are assisting OD in coordinating their own legal support. Apparently they had nothing in place for this. Another DABC tweet: As of 1:15pm, the total bond needed for #occupydenver arrestees is $9,727 (excluding booking fees, which are typically $30-60 per person)

Update 12:00PM 12/20: The Denver Post has released nine names of people arrested last night. Most of the arrested are facing misdemeanor charges, but Michael Clapper is facing a fourth degree felony arson charge. Highest bond right now is for Clapper at $5000, lowest is $100. Bail needs are nearly at $8,000.

Update 11:30AM 12/20: Protesters marched through the capitol hill neighborhood after the eviction, waking people up. Many left their homes and joined the march.

Update 11AM 12/20: Six confirmed arrests from last night. Bail so far is set to exceed $3000. Waiting for updates from court to confirm charges and bail amounts.

Last night, during police action taken to evict the Occupy Denver camp, protesters bravely faced down battalions of riot police. Structures built in the park were set alight, demonstrators fought police, threw barricades in the street, and staged raids on the dump trucks carting away their things. 4 arrests were made, 2 of which are felony arson cases.

While some of the Denver anarchist community, thick with ranks of veterans of militant protests, has checked out of the encampment (including the Denver Anarchist Black Cross, who headed legal support until two weeks ago, where that support was withdrawn for various reasons), many have woke up this morning surprised and concerned for the comrades on the ground. Many are doubtful as to whether Occupy Denver’s legal team will be willing to take on these arson cases, being that setting fires, barricading streets and fighting police doesn’t fit their liberal narrative of what a protest should look like. Those of us in Denver who know better are looking to step (back) up.

It is inspiring to see elements of the camp resist police eviction with tangible, meaningful action, especially in light of losing formal radical legal support. The local ABC was not expecting to take calls last night, yet the demonstrators on the ground fought back without fear and knowing full well bail might not be a phone call away. Please send updates to us on Twitter or through email at ignitedenver@riseup.net. 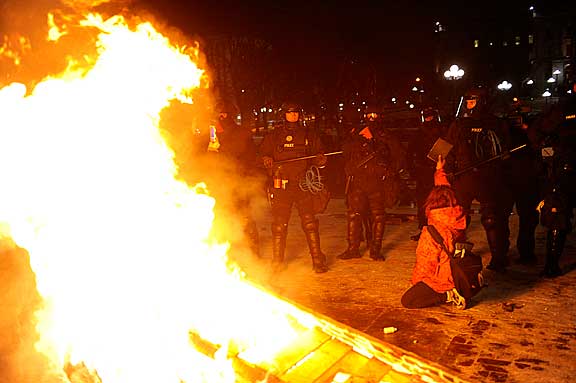 This entry was posted in Actions and tagged #Occupy, Denver, United States. Bookmark the permalink.