The past month there has been a lot of news from the Mapuche struggles, much of which had not been translated into English. We now present a summary of that information which includes: Numerous demonstrations and incendiary and armed attacks around the 4th anniversary of the murder of Matías Catrileo; News of the repressive operation by the Chilean state in response involving raids, arrests with severe charges, and seeking to apply the anti-terrorist law to Mapuche fighters and to blame them for the death of 7 firefighters.
__________________________________________________________

12/30/11- In southern occupied Mapuche territory a helicopter owned by the forestry company Masisa is burned to the ground in the middle of the night. Two banners are left claiming the action. The helicopter was used by the CONAF (National Forestry Corporation), which is part of the Ministry of Agriculture, to put out tree plantation fires and regulate the exploitation of the Earth. The attack is claimed by ORT-CAM ( Órganos de Resistencia Ancestral Mapuche de la Coordinadora Arauco Malleco). 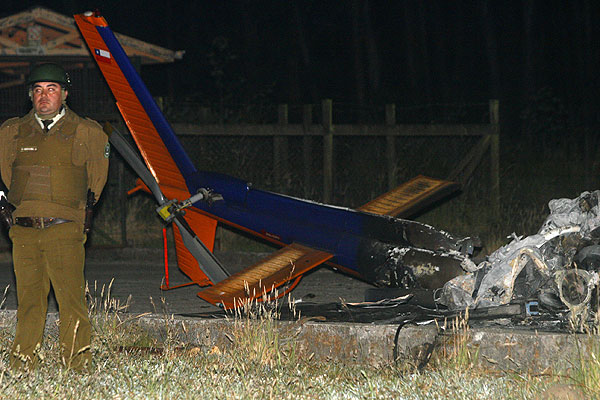 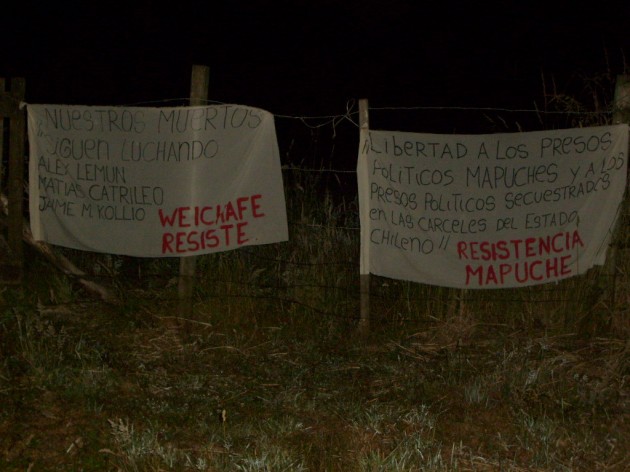 1/3/12, Temuco: At around 1:20 am, armed encapuchadxs arrived at the dumpsite Boyero and proceeded to shoot into the air, intimidate the guards, and set fire to 2 bulldozers, a guard booth, and an excavator belonging to the company Servimar. The incendiary attack left all 3 machines gutted and a nearby administrative office partially burnt, causing over a million dollars in damage. Flyers were left at the site in which ORT-CAM (Órganos de Resistencia Ancestral Mapuche de la Coordinadora Arauco Malleco) claimed responsibility for the attack.

1/3/12, Canete: At around 1:30 am a forestry truck and guard cabin belonging to the Volterrra company were torched, destroying them entirely. Carabineros were alerted by a worthless snitch who called the attacks in, but when they arrived they heard at least 2 gunshots, causing them to wait for backup. When they moved in with backup, there was not a sign of those responsible. The action was later claimed by ORT-CAM (Órganos de Resistencia Ancestral Mapuche de la Coordinadora Arauco Malleco). 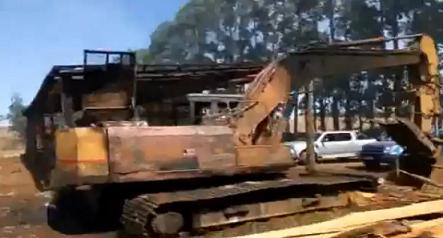 “…These actions were carried out in commemoration of the cowardly assassination of our weichafe Matías Catrileo Quezada, a militant weichafe of our organization, who took part in the process of liberation for the Mapuche nation, who we are sure continues to fight along side us in our battle against our capitalist enemies. We reaffirm our promise of resistance against the forestry companies, the mining companies, the energy companies, the latifundistas, and the transnationals, in our territory, who we will not stop attacking while they continue to occupy Wallmapu. We are making a call out to the Mapcuhe and other conscious communities to protest and attack our enemies on the fourth anniversary of Matías’s assassination. We demand immediate freedom for our weichafes locked away in Chilean prisons.

WEICHAFE MATIAS, WE MET YOU FIGHTING, WE REMEMBER YOU FIGHTING
With our heroes Leftraru, Pelantaru, Catrileo, Collio, Lemun and other we continue towards the liberation of the Mapuche people.
¡¡¡¡WEUWAIÑ!!!”

Widespread Demonstrations and Actions in Memory of Matías
translated from LT 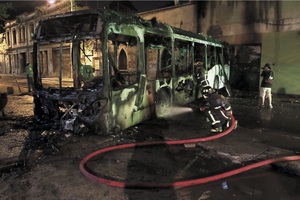 Around 500 people took to the streets in Santiago on the fourth anniversary of Matías’s assassination during which a city bus was set on fire and used as a barricade after the passengers and driver got off. A carabinero’s motorcycle was torched, and the businesses and banks in the area were smashed up. Among those arrested 2 face serious charges, among them arson and the transportation and use of an explosive device. One, Sebastián Fajardo, remains in preventative detention and the other, Euardo Garay under house arrest. In the poblacion Villa Francia, a march led to confrontations with the police which lasted until 2 am. 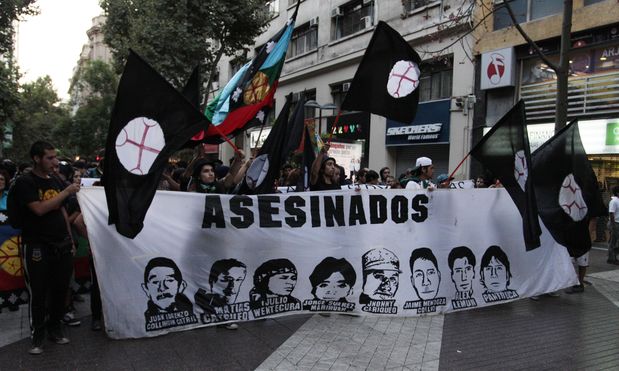 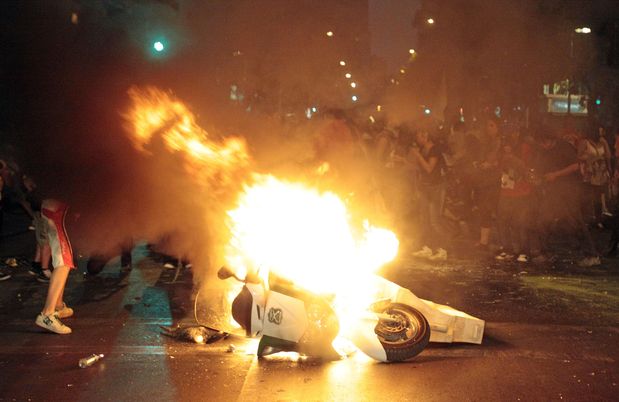 In Temuco, a protest in memory of Matías Catrileo resulted in the occupation of local government offices, and ended in a ceremony in the cemetery. Many friends and family members of Matias were present and his mother and sister, along with 14 others were arrested during an occupation of a government building.

In Concepcion, 150 people marched in remembrance of the assassinated weichafe. The next day barricades were erected at various points throughout the city. In Valparaiso nearly a hundred people marched in memory of Matías. In Puerto Montt a regional vigil commemorated Matías Catrileo, accompanied by a march in Castro (in the Chiloé territory). Around lake Lleu lleu, road blockades were set up and dedicated to the anniversary of Matías’s assassination.

“The only ones who die are those that are forgotten. An active and combative memory is a tool used to keep the ideas and practices of fallen comrades present in the struggle. Without making them martyrs, their individuality is recognized and they are acknowledged as comrades in the diffuse and coordinated fight to reclaim our lives.”

Four years have passed since we heard the shaken cry of the weichafe defending the body of comrade Matias, after he was shot down by some bastard. Matias and his comrades were taking back ancestral land usurped by the anti-mapuche latifundista family Luchsinger.

Matias, a freedom loving youth moved to Araucania in search of his origins, and due to his profound respect of nature, he decided to take part in the direct struggle for auto-determination and autonomy of the Mapuche people, a war against the Chilean state.

Power defends its henchmen, so no one should be surprised at the dropping of charges or short sentences that these worthless pieces of flesh with uniforms receive. Not one death at the hands of the police is an accident, they are all a clear demonstration of the terrorism of the state. With deeds like those done to Matias, Alex, Jamie, Claudia, and Johnny power seeks to annihilate the internal enemy. This is the work of the forces of order, with acts like these they send a clear message to those who wish to subvert the existent: “you await only jail or death.” With the same logic power lets the full weight of the law fall on those who scorn and attack authority. There is no justice, self defense is all that is left.

The only ones who die are those that are forgotten. An active and combative memory is a tool used to keep the ideas and practices of fallen comrades present in the struggle. Without making them martyrs, their individuality is recognized and they are acknowledged as comrades in the diffuse and coordinated fight to reclaim our lives. We do not view Matias as a victim, because victims are those who die passively. On the contrary Matias (like many Mapuche) represents a threat to power as a decided and rebellious 22 year old youth who made his life an eternal struggle, he lived and died as a warrior, as a true weichafe.

The fourth anniversary of his assassination is set in this context, as different and independent expressions of remembrance mark the beginning of this year and ensure that the physical absence of Matias does not go unnoticed.

This why behind the march on Wednesday there were confrontations with the police and various symbols of power were attacked. During the riots, 2 youths were arrested and accused of burning a police motorcycle and a public bus. The next day after being processed, one remained under house arrest while the other remains in preventative detention in the Santiago Uno prison. Our greetings and support to these newly imprisoned street fighters, especially to Sebastian Fajardo for his admirable attitude that shakes us with the spirit of warriors.

Free the Mapuche Political Prisoners!!
Every prisoner of the social war to the street!!
Our best homage is to continue fighting!!

PS: In light of the death of 7 Mininco firefighters, the state has invoked the nefarious Anti-terrorist Law, which clearly illustrates the lives of these people do not matter, the only desire is to seize the opportunity to extend a repression by placing blame on Mapuche communities in resistance and accusing them of terrorism. If anyone is responsible for the deaths of these people it is the forestry company Mininco who sends young people with little experience to fight fires. The only terrorist is the state.

Incendiary Attack and Attack on the Press near Ercilla, Chile
translated from LT

1/7/12 At around 11:30 Saturday night, encapuchadxs approached the estate of a retired army official, where a protected (secret) witness was staying. They doused the house in gasoline, took everyone out and set it on fire. 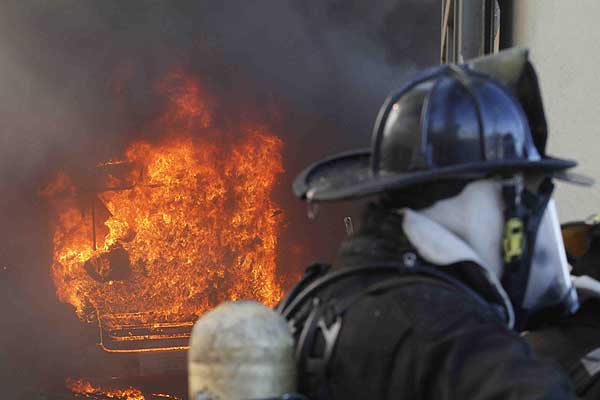 At around 1:30 am Sunday morning police were attacked with gunfire and slingshots when they tried to find those allegedly responsible for the attacks in Pidima, a nearby Mapuche community. According to the police, they blocked the roads with logs and opened fire.

The confrontation lasted 9 hours, during which media vehicles belonging to Mega and Agencia Uno (whose photographs and cooperation with the carabineros on 9/11 led to the arrest of comrades Cristobal Franke- Mono and Gonzalo Zapata) vehicles were struck by bullets. 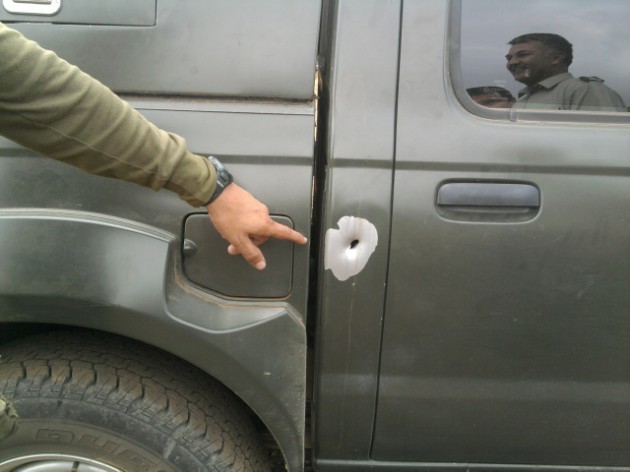 Throughout the last week, the Chilean state violently raided Mapuche communities in the south of the country after an incendiary attack and confrontation with thte police in the Ercilla community. This comes on top of the raids inflicted on the Mapuche Political Prisoners in the Angol Prison, hours after the death of the young firefighters in the Carahue forest fire.

It seems that as a response to this, at 7pm on Thursday, the 5th of January, prison guards and unidentified police personnel entered the unit holding the political prisoners and began recording footage, taking photos, and any form of identification. Natividad Llanquileo, who was just until recently a spokesperson for the Mapuche political prisoners, expressed that the prisoners are no the ones with blood on their hands, to the contrary it is the state that has the blood of the Mapuche people on its hands. Video shows carabineros of the Special Forces entering the Jose Jineo Ñanco community in Makewe attacking a woman who they found with her children, whom they later arrested along with her eldest daughter, leaving the children by themselves.

The only terrorist is the State!!!
For an end to the Anti-Terrorist Law!!!