A letter, a drawing and a song for Tortuga 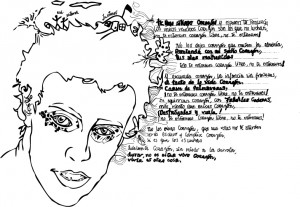 from negratortuguitalakalle, translated by war on society:

We immensely appreciate this letter.
A greeting, an embrace, and a complicit smile.

Today I write from indomitable moorings, referring not necessarily to the physical and temporal place in which I find myself, but rather to places inside of me that intimately connect with someone else, in a space where despite the distance you feel another living being palpating so close, as if they breathe in your ear, so much so that the allusion to their image becomes sensation, conscience and action, in subtle aspects that put me in conflict with the “reality” that I cohabit with my dear companions, aspects that shelter me and inspire me in all the possible and beautiful forms. From these moorings of active memory and living magic, it is primitive and peculiar that I with my little cub give you a tiny bit of our experience with you, materialized in letter and drawing. By experience, I do not only refer to the distorted image that the cathode rays or the ink show of you, but to the conjunction of perspectives and circumstances that surround you: to the persons who watch over you and keep you alive in word and in action, crossing all languages and realities, imitating the volcanoes of the Pacific Ring of Fire, emanating ardent magma through all the places where your name has been raised and your integrity uplifted, and of the rest who hoist the words of the unshakable ones… to those who have esteemed and embraced your sensibility. Also, it is the immense standardized majority who seek to justify their unbearable normality by using the spectacular image that the Department of Newspeak–in the Orwellian sense–has convened to create around you, an image demanded and projected at the command of those who use and enjoy the system and the collective misery of the techno-productive society that we have arrived at. And as we say, we of your pack, your friends and lovers, we would like to embrace you, to lick the beautiful marks of your daring, your little raccoon eyes and play with your curls, which my little one says make you look like the little prince Antoine Saint-Exupery and with a smile I say that you are his distant cousin, and that you probably have more than one thing in common. We also send strength to those who maintain your space of information in particular, and the rest of the spaces in which we are able to interact — I hope you may know the fundamental and invaluable role that you have been playing! — you have known to keep our sisters and brothers free! because there is no defeat worse than forgetting, regret, letting fear bury us in inaction, in guarding oneself and hoping the danger passes, my experience tells me that they end by guarding themselves forever and awaiting with regret (such good Christians) the sentences of our “poor comrades,” because if it’s this way, we give to power what it has always sought: the ability to manage our freedom in all its dimensions: physical, mental and spiritual, and for that, as I see it, there is nothing to speak about. Because, Luciano, I feel myself a prisoner when I see the images of the prison, when I see the feasting of the beasts around you, when I see the acceptance and even the glorification of the prison-work, because you within the dungeons remind me that a great part of me is also prisoner and conditioned, and so I see this work that your brothers/sisters do as important: They keep you outside, in active memory, not in that pitiful and passive memory of adjusting to reality, of embracing hope in institutions; we do not want that reductionist and conformist memory, nor do we need it, leading the regret that some persons publicly show for your situation. Also we would like to embrace those who are able to question (themselves) deeply and radically, from the inside to the outside, the circumstances that have touched us to share.

With this idea of maintaining communication and interaction in order to break with the isolation, I want to respond to a couple of ideas that Luciano has put forward in his communiques:

“Power’s ambition with my trial is for the señora of the house to tell her little rebel that this is how idealists meet their end, those who dare to dream, to even think, that it begins with the rebellion proper to youth and if it goes unchecked it can end in terrifying consequences–to justify by means of my example the prison system, the repression for the “good of our children and the future.”

For those of us who’ve had the opportunity of sharing constantly with children, through sharing in an upbringing or directly by being fathers or mothers, we see the means of standardized uniformation of our little ones with their values in schools, nurseries, and very strongly in their spaces of “leisure,” invading their bodies and minds with specific structures of language and technocratic rationality, rejecting all the other approximations of reality that some cultures know well: intuition, sensations, perception of touch and smell…–instinct in its wild state–many times embracing silence before one’s words; with this I do not mean to deny language as a medium, but rather to understand it as one possibility among others, and clearly with many limitations.

As for the making an example that Luciano speaks of, it only remains for me to mention that my little sprout knows about you, knows your story through a tale full of lessons and characters, knows about the “wild turtles,” knows that to embrace certain bodies of light, even if only for milliseconds, can be infinitely more pleasurable than to embrace normality for eternity, knows about adventure, wild joy and of course also the risks, risks that are taken on without fear, with love and in freedom. This is my way of breaking the silence, by seeking to share with a wild child the situations and characters that can appear in one’s step from these moorings. It seems to me a good way of not falling into things that seem so harmful for little kids, like “formation” and alienation, the lifting up of heroes, martyrs or images to follow. But it has happened that s/he already found out that one of the characters from the stories has a correlation in reality, and to this I responded with a complicit smile and from that came this gesture, magical in itself, like the exquisite moments between Miguel of Unamuno and his characters. I also feel (and then think) that I am not interested in forming the child in your or my ideas or practices, nor anyone’s, but rather creating developing his/her instinct and intuition, feeling and thinking, and if some day our peculiarities channel us toward the same sea, I will embrace her/him with the complicity and wild joy of those who meet on paths with no turning back.

As this poem says:
“I have embraced eroticism and rejected pornography,
I have embraced the day and the not-waiting, incinerated the commercial representation of life and the religious notion of hope and deferral–
Making myself a lover of life and not of the opportunities of life,
loving the here and the now, not the somewhere else or later.
Because from now I have decided to enjoy my life and that of others as the spontaneous combustion of millions of leaves guided by the winds of pleasure, as the dead feed the earth and the earth feeds life…”

I would end by crying out and demanding your freedom, but that would be too proud and naive, because I know that you will never allow them to take it from you, at least not in its most essential forms. That freedom, as someone said, is like a call, a spirit… and that, my brother, you have already snatched from society. And I also know that the rest of those who are in this somewhat more ample prison will not allow you to ever feel alone. You will feel our love, do not doubt that my dear friend, in all the uncountable gestures that will come and which are already gestating and materializing, for the liberation of your earthly body and that of all living beings subjugated and domesticated by civilization, especially in the prisons. The spontaneous action of those who do not wait for the objective and subjective conditions of those who speak of them so much, will be gestating exponentially, as you say it well, with solidarity as the first link in a domino effect, like the potenciating effect that chaos theory teaches us: “the fluttering of a butterfly’s wings  can change the entire conditions of life.” Action that surges and will surge from the same instinct and intuition, from the call of Miyazaki’s “Spirit of the forest” and Morales’ “Rayencita and its Spirit of the River.”

Finally, remember that the letters, drawings, responses and any type of interaction with brothers/sisters is much more than a symbolic gesture, it is a real and direct action that snatches the clutches of isolation and solitude from our brothers/sisters, because power is going to think about memory and active action, twice, three times, or a thousand times before it holds the indomitables in the Dantesque dungeons, as a result of this beautiful effect called solidarity, which expands chaotically like the roots of the trees silently destroying plumbing and bringing down buildings.

I would like to share songs with you, and I hope that we will some day, me on my guitar and the little one on the xylophone, while we kiss your eyes, caressing your face and playing with your little curls, we will tuck you in and put you to sleep with them under the stars…
after a beautiful day delighting in the nothing…
after a beautiful day of having enjoyed the fruits of the garden of peculiarities.
For now I leave you the written form of a song on the little drawing that we are sending you, and typed below in case you can’t read my handwriting.

A wild child and another who seeks to return to these.

Forward, dear heart, without fear of defeat,
to endure is not to live, dear heart, to live is something else.