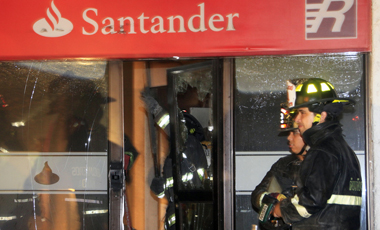 from hommodolars, translated by war on society:

Yesterday, February 27, 2012, near the intersection of Vicuña Mackena and Av. Matta, we burned a bank (Santander) at around midnight, an action firstly in solidarity with the campaign for the freedom of the comrades of the “Security Case” but also vindicating the struggle of those who today turn against an oppressive system that tries to end the struggle, this strike of sabotage against the rich and powerful is a small gesture for them to know that we are not afraid and like many comrades we remain on our feet.

In this territory called Chile, they accuse, punish and condemn without evidence anyone who struggles and rebels against all the Machiavellian thirst for vengeance against the people – the poor.

The only and real objective is and has been to annihilate and execute Freddy, Marcelo and Juan, now on hunger strike, with a farce of a trial and high/maximum security prison regimens, punishments of maximum enclosure.

In this scenario of power, the practices of hostage-taking and kidnapping pertain to the repressive apparatuses of the state such as DIPOLCAR, OS7, OS9, BIPE, etc; these are the murderers of Cecilia Magni, Norma Vergara, Elizabeth Escobar, Raúl Pellegrini, Eduardo, Rafael and Pablo Vergara, Matías Catrileo, Johnny Cariqueo, Alex Lemún, Rodrigo Cisterna, Claudia López and so many others. These are the repressive agents who today kill us, condemn us and punish us.

Never forgive, never forget!! History is ours, we make it, we the rebellious happy and subversive men and women!!

For the freedom of Freddy, Marcel and Juán!!

For the freedom of the Mapuche and internationalist combatant prisoners!!

To combat, arson and subvert the murderer corrupt agents of power and their prison society!!

[Pamphlet for the Banco Estado Attack]

This is the leaflet that the carabineros and the bourgeois press say they didn’t find!! or that better yet they hid!! in the Banco Estado located at Vikuña Mackenna and Mujika this morning!

Ours is the conviction!!

We declare our total hatred of the society we were born into! predestined for a god that does not exist, for a State that humiliates, for a capital that bursts the lungs of the entire world.

We take on the negation of the survival that they offer us, as soldiers of their armies, as citizens of their democracies, as students of their schooling, as devotees of whatever religion. And we respond for each one of their blows, abuses, tortures and humiliations lived by our ancestors and by all the condemned of the earth!!

We will respond blow after blow, have no doubt about it you prosecutors and judges. Pigs, rats and police; politicians of all kinds, capitalists and bourgeoisie.

Have no doubt!! we will be your worst nightmare, it is our commitment, our conviction!!

Today we attacked while thinking about:

the 81 prisoners murdered by the gendarmeria in San Miguel prison on the 8th of December, 2010.

those dead and fugitive from the Talagante Prison in January of this year, seeking their freedom.

The almost 400 prisoners killed and wounded some weeks ago in Honduras.

Luciano Tortuga Pitronello and his stoic recovery in the hospital of the Santiago 1 prison. And we will not stop, do not doubt it, full of strength, without moderation!!

DIRECT SOLIDARITY WITH EVERYONE WHO STRUGGLES, PRISONERS OF THE SOCIAL WAR TO THE STREET!!