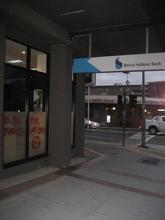 In the early hours of the 10th of March, exactly two years since Lambros Foundas was gunned down by uniformed pigs in the street of Athens, some anarchist vandals targeted the Marrickville branch of the Beirut Hellenic Bank.

We sprayed “BURN BANKS” “FOR LAMBROS” “FOR SOCIAL REVOLUTION” on the windows of the bank, put superglue in the ATM card slots and covered the screens with paint.

This minor act of sabotage was carried out in memory of Lambros, an anarchist, social fighter and member of Revolutionary Struggle. He lived with the courage and conviction to translate his anti-authoritarian beliefs into action and he died on his feet, for that we will never forget him.

For generalized attacks on all machinery of capital and the state!