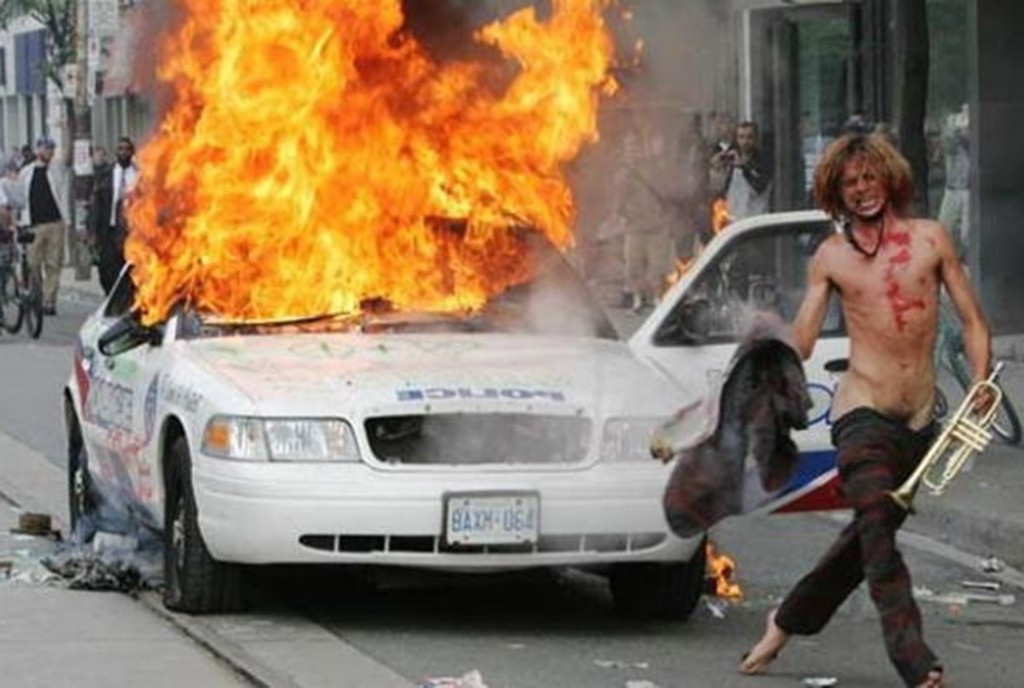 It has been one and a half years since the leaders of the twenty richest nations and their commercial and financial interested convened in Toronto for a glamorized photo-op. In June 2010, the G20 Summit took over and militarized the core of Toronto, Canada’s largest city, and saw a week of protests, actions and mass arrests.

In the lead up to the summit, police from different municipal, provincial ,federal policing and intelligent agencies formed the G20 Joint Intelligence Group to network and coordinate the state repression surrounding the G20 Summit. This included a number of tactics, including twelve undercover operations which led to the arrests of over twenty people on conspiracy charges.

During the weekend,militant actions were called by the Southern Ontario Anarchist Resistance (SOAR) and by a number of autonomous anarchist and indigenous groups. On June 25th, a break-away demonstration was called by SOAR called “Get Off the Fence”. This action saw a five hundred plus anti-capitalist bloc wreak havoc on Toronto’s financial and shopping districts, followed by generalized rioting throughout the core for hours following the demo.

What we have compiled here are some updates about anti-authoritarians and anarchists who have been facing serious criminal charges following the actions of people in the streets, and in meetings prior to the summit. Many of these cases are still open and there are many other people who have been convicted and are serving sentences who aren’t tied to anarchist networks. We hope this will shed some light on what has happened since the riot.

Twenty-one people were charged with being part of the G20 main conspiracy group,the crown alleged that there were upwards of fifty other co-conspirators who were never indicted. These charges stemmed from a one and a half year infiltration operation undertaken by OPP officers Bindo Showan and Brenda Carey.

The undercovers started infiltrating anarchists in Guelph in 2008, and later spread the operation to Kitchener-Waterloo, Toronto and other communities in Southern Ontario. There were other undercover operations in Toronto, Vancouver and Montreal and upwards of a dozen police infiltrators.

By the time the case reached its preliminary hearing, charges were dropped against three defendants and one defendant received a suspended sentence in a plea resolution negotiated independently. In November, the remaining seventeen came to a plea resolution that saw charges of eleven of the defendants withdrawn and six agreed to pleading guilty and serving varying prison sentences.

The sentence lengths listed are before taking into account pretrial custody, house arrest, etc. Most people will serve about half of their sentences listed here.

Erik Lankin – 8 month sentence for one count of Counselling to Commit Mischief. Sentence began on November 28th 2011. Erik was released on January 26th 2012.

Adam Lewis – 6 month sentence for one count of Counselling to Commit Mischief. Sentence began on November 28th 2011. Adam was release on February 5th 2012.

Peter Hopperton – 8 month sentence for one count of Counselling to Commit Mischief. Sentence began on November 28th 2011. Peter was released on March 15th, 2012.

Leah Henderson – 14 month sentence for one count of Counselling to Commit Mischief. Sentence began on December 20th 2011. Leah is scheduled for release in June, 2012.

Jaggi Singh – Received a suspended sentence for one count of Counselling to Commit Mischief of 12 months probation. Jaggis probation began on June 21st 2011.

Robin was the first G20 defendant to be convicted of two counts of Mischief Over 5000 dollars and one count of Masked with Intent for breaking windows at a Starbucks and Bell store.

Robin served nine months under strict bail conditions before his sentencing. In March 2011, Robin was sentenced to one year house arrest, followed by two years probation, a 5000 dollars fine and three hundred plus community service hours. Robin is currently serving his sentence in London, Ontario.

On December 5th, 2011 Ryan Rainville received a conditional sentence of four months under house arrest, followed by four months curfew and then one year probation. Ryan had plead guilty to three counts of Mischief Over 5000 dollars for using a red and black flag and a hammer to destroy Toronto Police cruisers during the G20 riot. He also plead guilty to a Breach of Peace.

Ryans sentence took into account the ninety-six days he spent in the Toronto Metro West Detention Centre and Maplehurst Correctional Complex following his initial arrest on these charges. Ryan fought and won a trial where he contested charges of Assault Police with a Weapon and Obstruct Officer. These charges stemmed from accusations that a police cruiser Ryan had damaged was occupied.

On December 20th 2011, a member of the G20 Investigative Team came to his home at Sagatay Men’s Residence to serve him with an appeal of his sentence. The State believes Ryans sentence was too light. It is clear that Ryans pride in his convictions and anarchist values have led them to target him in an attempt to send a clear message to other anarchists, that our politics and bodies will be criminalized if we do not fall in line.

Before his sentencing, Ryan had served over three months in prison, eight months under house arrest and five months of a restrictive curfew. He is currently serving his sentence for these charges of four months house arrest, four months curfew, followed by a year probation. It will be three years after the original event before Ryan is free of these charges.

Ryan’s appeal hearing is scheduled for this spring.

GABC has just released a zine of Ryan’s statement to the courts before his sentencing.

See Guelph ABC’s statement: “In the Face of the Courts”

Girr was arrested in November of 2010 by the G20 Special Investigation Team for his alleged participation in the black bloc action. He was placed under house arrest in Rockwood, just outside of Guelph. He eventually had his conditions reduced to a curfew.

Following his preliminary hearing, he plead guilty to one count of Mischief Under $5000, one count of Masked with Intent and one count of Public Nuisance. He was convicted on February 3rd, 2012 and is currently serving a nine month sentence. This is his first conviction.

Kelly has been presented in the media as the “ring leader” of the black bloc action. She has faced some of the harshest repression. She spent two months in prison, before being released to house arrest with her parents. Kelly currently has a curfew and a lengthy non-association list which includes upwards of a hundred people.

Kelly was charged with thirteen counts including Mischief Over 5000 dollars, Conspiracy, Obstruct Police, Assault Police With a Weapon and Intimidation of a Justice System Participant. Kelly has had some of these charges dropped, currently she is facing seven counts of Mischief over 5000 dollars.  Kelly has plead guilty and is awaiting sentencing. The Crown is looking for upwards of 2 years.

George is facing nine charges for allegedly participating in the black bloc. George was arrested in Peterborough by the local police in on September 28th 2010. He was then transferred to Toronto by the G20 Investigation Team. George was denied bail and spent a week in the Toronto West Detention Centre, before being released.

In Mid December 2011 George pled to three counts of Attempted Mischief Under 5000 dollars and one count of Disguised with Intent to Commit a Crime. The Crown dropped the possession of stolen property and weapons dangerous charges.

Georges trial will have it’s closing arguments and sentencing in March. The Crown is seeking nine months in prison for George.

Jae Muzzin was arrested for breaking two windows at the Toronto Police Headquarters during the Get Off the Fence demo. Jae plead guilty to two counts of Mischief Over $5000 and Common Nuisance. The crown originally was asking for 1 year of jail.

Jae took a plea deal and was sentenced on February 17th, 2012 to an intermittent sentence of 60 days, to be served on 10 consecutive weekends. His Sentence will be finished by late April. Jae was also ordered to pay restitution of $2,500.

Guelph ABC is not currently in contact with Byron or his support group.

On June 22th, 2010, Byron Sonne was arrested in his home in Forest Hill north of Toronto in relation to the G20 Summit. The police created a media spectacle of his arrest, making him out as some “bomb wielding terrorist” to justify the massive expenses of policing the meeting of the richest countries of the world.

Originally, Byron was arrested on six charges ranging from explosives to intimidating of a justice participant by threats. Byron was held without bail for total a total of 330 days. In February, Byron had four of his charges dropped and is currently in trial for the remaining two charges of Possession of Explosives for an Unlawful Purpose and a Counselling offence.

Julian Ichim, one of the original G20 Main Conspiracy Group defendants who had his charges dropped was charged with six counts of Disobey Court Order in relation to a number of posts on his personal blog. He is now facing federal offences before the courts.

In these posts, the crown alleges that Julian violated a publication ban around the G20 Main Conspiracy Group case by writing about his personal experiences with two undercover operatives. The publication ban was put in place in part to conceal the names and identities of undercover officers Brenda Carey (undercover identity: Brenda Dougherty) and Bindo Showan (undercover identity: Khalid Mohammad), but has since been rescinded due in part to the continued outing of these operatives on the internet.

Julian’s trial is scheduled for mid-March.

Dan’s house was invaded and he was arrested on August 25th 2011 by the OPP Anti-Racketing Branch. He was charged with one count of Defamatory Libel and one count of Council Assault for allegedly posting information on a Kitchener-Waterloo activist website, www.peaceculture.org about the identity and where-abouts of G20 undercover operative Bindo Showan (Khalid Mohammad). Dan’s pre-trial is scheduled for February and the crown is seeking two and a half years.