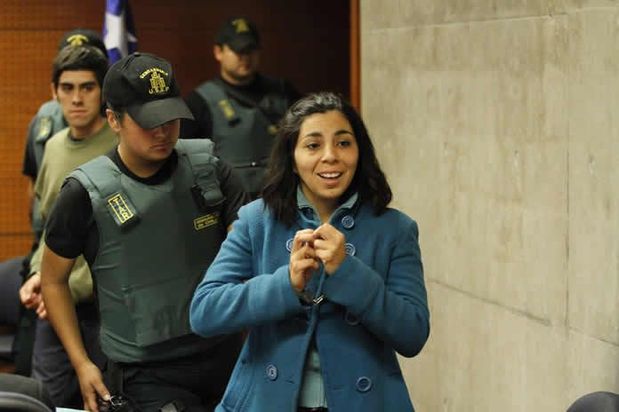 On December 3, 2012, the preventive detention of Carla Verdugo and Iván Silva was finally reviewed.

The 12th Court refused to transfer from prison to total house arrest, maintaining and following the anti-terrorist discourse of the prosecution.

The defense insisted on invoking the ruling against Luciano, which held that it was a crime of “damages” and “arms control,” but not a terrorist crime.

The comrades insist on rejecting any possibility of recognition of their action under the anti-terrorist law, even if this means spending longer in prison.

After the defense appeal, on December 7th the Court of Appeals of San Miguel maintained preventive detention for both comrades.

The prosecution insists on the fantastic figure of an “attempted terrorist attack,” without even indicating where the device would have been placed, with what intention or in what context.

Again, Carla has been in prison in the 5th Tower of the San Miguel Prison and Iván has been in Module 34 of Santiago One, since April 16, 2012.

The Hearing for the close of the investigation, for the oral trial to subsequently begin, was set for December 6th. At this time we are unaware whether it happened and what the results were.