On 12/6/12, a Transantiago bus was torched by encapuchadxs (“hooded ones”) around midnight in the poblacion Lo Hermida in the Peñalolén community. The encapuchadxs boarded the bus and forced the passengers and driver off, then proceeded to douse the bus in gasoline and set it on fire. They threw dozens of fliers around the site of the attack expressing solidarity with struggle of the Mapuche people and commemorating the murder of 81 prisoners in San Miguel prison, then fled the scene. Among the leaflets, which were distributed amply enough to be noticed, some read: “For each act of repression in Wallmapu, A VEHICLE BURNED.”, “Every prisoner is political…81 prisoners burnt alive…Who set them alight? The Chilean state.” The vehicle was completely destroyed by the fire. Police arrived shortly and began their investigation.

Around 7 AM, unknown individuals burned tires on the freeway close to the El Manzano prison in Cocepción, blocking access to the road to the Andalién river. The barricade interrupted transit for over an hour until firefighters arrived and cleared the road. Leaflets found in the area declared the action as a commemoration of the 81 prisoners assassinated in the massacre of San Miguel prison. 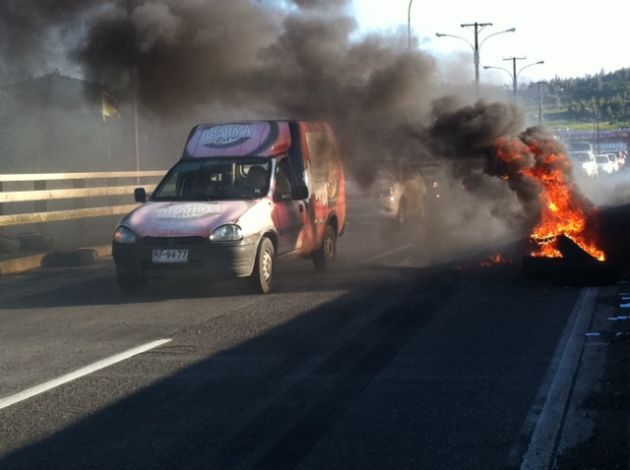 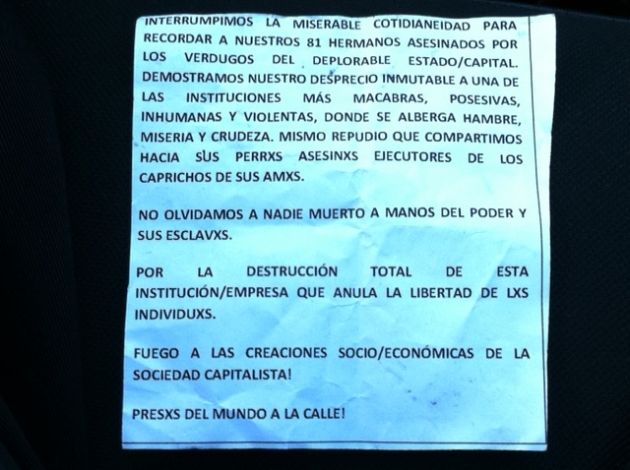 This entry was posted in Actions and tagged Chile, San Miguel. Bookmark the permalink.