Bolivia: Prison letter from Krudo one year since the frame-up 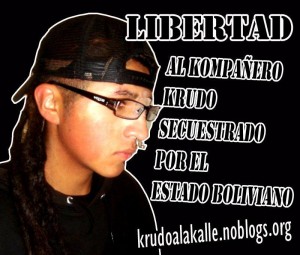 Freedom for comrade Krudo imprisoned by the Bolivian state

One year into the political persecution and repression by the state after having framed up slanders against individuals who refuse to be part of the established order, thirteen in total, some of whom were pulled from the case and freed, like other snitches and/or collaborators in the investigation of this frame-up. As it is known (and it is not too much to emphasize) three were imprisoned, since those who had collaborated were rewarded with house arrest, and we were transferred to different penitentiary centers (of moral extermination). In a part of the confinement, the prisoner in the women’s prison (Obrajes) decided to collaborate and got house arrest as a reward, leaving only two prisoners. Later on the prisoner in San Pedro prison got house arrest too (but not collaborating, which is dignified). So today, May 29, 2013, I remain behind the bars of the punishment to set an example, and it remains in my memory (which never forgets, never forgives) that a year ago I was kidnapped and tortured in an attempt to get information from me that I didn’t have, because it did not exist and of course with the intention of incriminating others (which I did not do).

Just so (it seems important to me) that collectives, individuals and/or movements analyze the situation from the root of the problem in their own way, in order to each take a position toward it. Since this is how to demonstrate the solidarity of those to whom solidarity seems coherent (I will not go into details of separatism), as the very way of rejecting the attitudes of those who today consider themselves conformed and repentant.

Now a year later and at these heights it is of vital importance to reflect, self-critique and learn from this complex experience.

Starting with the support of comrades from these parts and from abroad, since the gesture of not abandoning and of not turning one’s back on someone who is fighting and imprisoned is noticed. But it is hard and even a bit painful to know that some only sought protagonism, making themselves known as the solidarian (and, for more weight, as the only one), only showing that their struggle is to fool themselves, and even more when it is not consistent with their discourse. And well then others totally disappear after having expressed solidarity or spoken, thinking that with a letter that’s it, and believing stories that “I did enough.”

Well I believe that solidarity and the struggle for freedom do not end until seeing all the prisoners fighting along with their afines, or at least it is a struggle that never ends. One must be consistent with one’s ideas, fighting, acting and even conspiring, as to truly believe one is fighting.

At least in my (involuntary) instance in this place, I could understand better the point of being consistent, and I understood that even the act of making mistakes helps us greatly in self-critique. Before going further, in these lines I will not try to justify my mistakes or much less wash my hands, that is also why almost from the start I clarified what happened around my sole statement, so it would be known that the mistake I made was having signed a distorted and manipulated statement, without realizing the consequences. But this is how I realize that the important thing is to be prepared before a situation like this one, since it can happen to anyone who is within the space of the struggle for total liberation (this is because the state persecutes and will persecute as well as criminalize anyone who “fits a profile” contrary to their social order). Up to now I learned that mistakes are not “anarchist sins” and do not bring you to failure nor to defeat, although this contradicts the perfectionist attitudes, mistakes can be remedied and this is why I attempted to do this within my possibilities, sending a petition to my judge making it known that my statement was manipulated and therefore invalid. And for those who still believe that I failed anyway, I do not give explanations to these people. I did not fail, nor am I defeated, and the defeated one is the one who repents their revolutionary ideas and actions, and collaborates with those who locked them up, conforming to this legal system of things, preferring to opt for living “in harmony” with society against those who conspired.

Neither failure, nor defeat, nor innocent, nor guilty, because to consider oneself innocent is to affirm that there are guilty, resistance must still be lurking.

And yes, I still keep being grateful for the constant solidarity that has been given up to now.

This entry was posted in Letters and tagged Bolivia, Mayron "Krudo" Kioshiro. Bookmark the permalink.