‘A Little Fire to Dispel the Cold’ – Attack on BancoEstado next to the Justice Center in Santiago, Chile 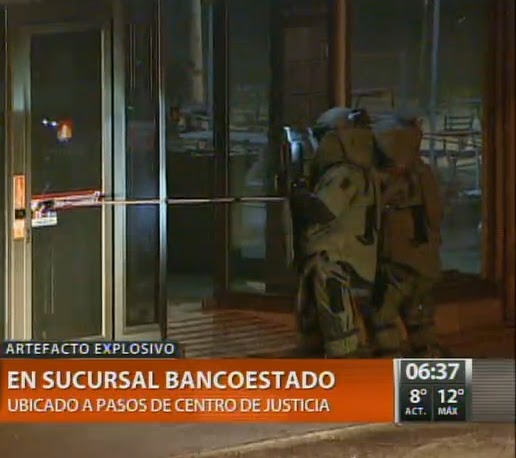 The resurgence and strengthening of the discourse against the fantasy of terrorism will be, then, the backdrop on which legal processes are developed, with clear political interests, in which the State finds itself involving the controversial Anti-terrorist Law.
– Hans Niemeyer, “Requiem for the Passing Moon”

A Little Fire to Dispel the Cold

Tonight we have struck oblivion. We have decided to set fire to social normality (wrongly called “peace”) so that, for a few fucking minutes, attention is focused on our words.1

Today we want to rescue a compañero from silence. A compañero who has never been merely another name to remember in this war. He has never been just aerosol on the walls, or ink on a leaflet, much less an anecdote to narrate a few years hence. This compañero has a name and a family name, and the lackeys know this well. Hans, this night goes out to you.

Brother, we want to salute you through this action, without revealing our names, and surely teasing out of you a brief smile, so necessary in these trying times. We want to embrace you across the distance with the warmth of the fire we started tonight. Because yes, tonight, just before 9:30, we easily set fire to the BancoEstado branch located at the intersection of Viel and Pedro Montt, almost before the prison where a trio of bastards have decided to hold you prisoner. The same bank which day after day is used by beasts who have decided to abandon their human condition and turn themselves into prison guards.

Hans, we know, without even being able to imagine it, that you have spent terrible days (to say nothing of the nights…) since that Wednesday. None of us have ever set foot in a prison, but we know the suffocating heat of the summer and the cutting chill of the winter that surrounds in the blocks of the High Security Prison in which they have you captive, but not diminished.

The fact that you keep your head up fills us with pride. For us you continue to be an unwavering compañero, showing yourself ever agile before those who want to see you caged. You show an integrity we have not often seen. There are those who flee without solidarity and cowardously from brushing shoulders with the mercenaries of Power (2), others fall into paranoia and inaction. But luckily we have compañerxs like you and your companion who, with mistakes and successes, remain united before the hardest blow.

Your executioners know what they did. They know that they have taken a father from his son, a man from his companion. a son from a mother. You, judges and prosecutors, should pay attention as you read this.

You knew before what would happen in the trial. You know that you would dictate a sentence without any probation to be spent in freedom. You know that the statements of the police Romina Barros, Luis Olguín and Gerson Silva are inconsistent. You know who acted as persecutors. You know that Raúl Guzmán asked for the same sentence for Hans (who set off a low-powered homemade bomb in an uninhabited location in the nighttime, when it was out of service) as for Felipe Pinela Zenteno (who three days before Hans’ capture intentionally fractured the lung and tore the intestine of a girl only 1 year old by beating her). Apparently, and to Don Raúl’s eyes, both crimes are identical.

And who do you favor with this horrible decision you’ve made? Is this your idea of “justice”?

You, the ones who dictate sentences as if reciting poetry, knew beforehand that Hans isn’t a danger to society. You have taken from society a person who helped with the prevention of drugs, the same drugs that Pinochet–that dictator who died without standing any trial–introduced in his years of terror.

It wouldn’t be a great effort to hand over a simple probation, in your own terms “to give him a second chance.” But no, you read a sentence of 5 years for a compañero the way someone reads a shopping list. That’s 5 fucking years! Did you not think about the others? What shit do you have where you heart should be?

Nevertheless, all is not rage. Our fire also represents a profound feeling of companionship and love for Hans and Daniela. We know that this trial, instead of distancing them, has united them more as a family; just as they have been made to live degrading experiences, they have also lived unique moments of happiness. You two know that you are one of the few real relationships of love in this world. Strength and spirit. Whatever the verdict of the appeal may be, the hummingbirds will not depart leave without eating.

Compañero Hans, compañera Daniela, with a bank in ashes we unite ourselves with your attitude of firmly pursuing the mountain they’ve made you climb, maybe one of the most difficult. Speculating about why your clandestinity failed or why Hans did not hand himself in once they declared you in rebellion is not something that appeals to us. It would be easy to say it, to criticize you. But we are not in your shoes and we have not slept your nights. Hans and Daniela, we appreciate you as the compañerxs you are, and that is enough for us. We will always respect the decisions you made because for us you have already ceased to be disconnected from our affinity.

Tonight, compañero, you have joined us in this attack. If in less than a week we mapped the area, calculated their boring routines, learned the rounds of the police, made the materials and were victorious, imagine what we could do in more time…

We salute those who yesterday went in clandestinity and today have to wait endless weeks to find out their future. Freddy Fuentevilla, Marcelo Villarroel and Juan Aliste, all strength for you, brothers. Acquittal or sentencing, know of our eternal love for you too. From July 25 to 31, International Week in Solidarity with the revolutionary compañerxs accused in the Security Case! For furious agitation!

Because a repressed sister or brother is vindicated with agitation, words, and actions.

REVISION OF THE PUNISHMENTS SET AGAINST OUR COMPAÑERO HANS

HANS NIEMEYER TO THE STREET!

(1): We knew beforehand that we would necessarily risk police attention. But you do not frighten us, you never have. We recognize you better than you recognize us, and we both know our real potential. You know that we are not used to leaving traces, that we act quickly and without clumsiness. You know that our permanence in the places attacked vanishes as quickly as your slaves in the Carabineros Laboratory who continually quit, frustrated at not finding what you make them look for. How does it feel to squander millions of pesos on investigations that, after years of gathering irrelevant data, sit stacked in archives? Go on, keep doing the only thing you do well: making fools of yourselves.

(2): The clearest and most recent example is the police raid of the Central Station of the University of Chile, where less than five police were able to corral eighty persons who self-identified as “combative” but who, on seeing a green shape with batons in their hands, fled terrified straight to the bathroom to shit themselves in fear while their “compas” were beaten by the police. What comradeship they showed! Really enviable.

(3): Victor Lambros is the son of the members of the armed anarchist group Revolutionary Struggle, Pola Roupa and Nikos Maziotis, born on July 24, 2010 in prison.

He carries the name of Victor in memory of Pola’s father, who was a saboteur during the Nazi occupation in Greece, and who then was shot fleeing toward Athens and Makronisos. The name of Lambros is in honor of the compañero Lambros Foundas, member of the anarchist guerrilla group Revolutionary Struggle, killed during a shootout with the police on March 10, 2010.

In July 2012, the whole family went into clandestinity, fleeing from sentences of 50 years in prison. To date they have not been arrested. For us, the flight of these three compañerxs represents that, even in the most difficult situations, there is some hope. And therefore, Hans, we send you a photo of Victor Lambros, hoping that someone can get it to you and to Daniela, so you remember that, as long as the night may be, there will always be a dawn. There is a reason the sun exists.

1 Response to ‘A Little Fire to Dispel the Cold’ – Attack on BancoEstado next to the Justice Center in Santiago, Chile