Mexico: Clashes during the protests against energy reform (photos, videos) 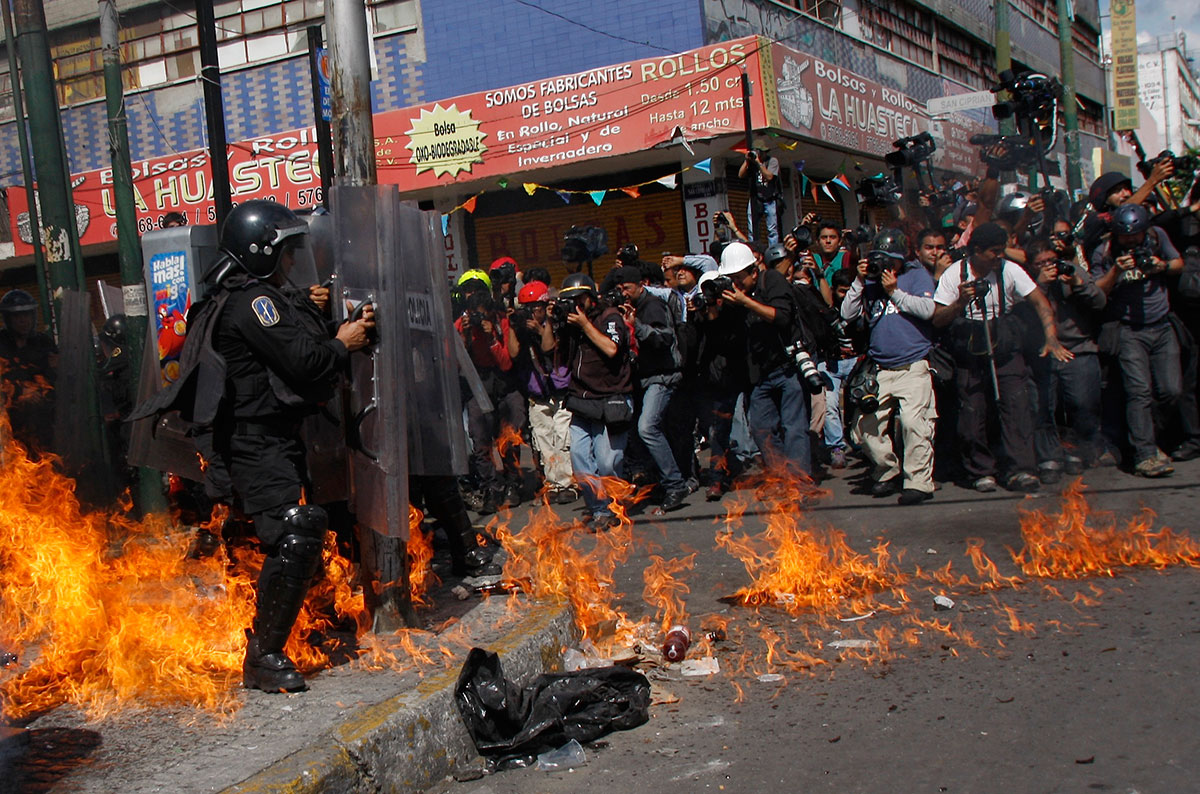 we receive and translate:

During the protests against the energy reform, anarchist cells attacked the police in the nation’s capital.

The clashes between the police and encapuchados started at the beginning of the demonstration. There were several sallies and collisions, but the most relevant was in the La Merced neighborhood.

At the end of the demonstration, more than 15 people had been arrested and several were reported wounded. Not having more certain information, we think we have to reproduce a section of a journalist report, not without first saying that we are not interested in the reforms, we are not interested in popular struggles, what we want is to fill this society with fire along with its filthy owners!

War without quarter on everything that dominates us and takes our freedom!

They merely waited for the opportune moment to throw molotov cocktails at the riot police who guarded the outskirts of the Chamber of Deputies. The self-described anarchists did this and the march, which drew a serpentine human kilometer of dissident teachers and students, dispersed.

The enormous contingent, formed primarily by thousands of teachers, didn’t achieve its aim of reaching the San Lázaro Legislative Palace.

They only got to the intersection Fray Servando Teresa de Mier avenue and San Ciprián street in the La Merced neighborhood, where an impenetrable and reinforced line of riot police was formed, which prevented the contingent from advancing along Congreso de la Unión in order to flood into San Lázaro.

On Fray Servando avenue, the teachers congregated to demonstrate against the structural reforms; they also expressed their repudiation of the government of Enrique Peña Nieto–who today delivered his First Address to Congress–and insisted to the political class that it include their demands in the changes of the education legislation.

While the leaders of sections 9, 18 and 22 of the National Union of Educational Workers (CNTE) set their position, a dozen anarcho youth prepared molotov cocktails and launched long-range rockets trying to smash into the drones, small unmanned aircraft equipped with cameras, remotely controlled by the Federal Police to watch over the demonstration.

The magisterial leaders called the thousands of teachers to return to the stage in the Zócalo and immediately the black-clad and anarchist-looking youths threw molotov cocktails and rockets at the riot police, who repelled the attack, launching themselves at striking them.

The teachers who came from Guerrero, Oaxaca, Michoacán and Chiapas withdrew, they did not participate in the riots, but they did attack some anarchists for having set out from within their group. Meanwhile the police advanced several blocks in formation. All of them running, shielding themselves from the explosions, the youth with their faces covered came to blows with the riot police. 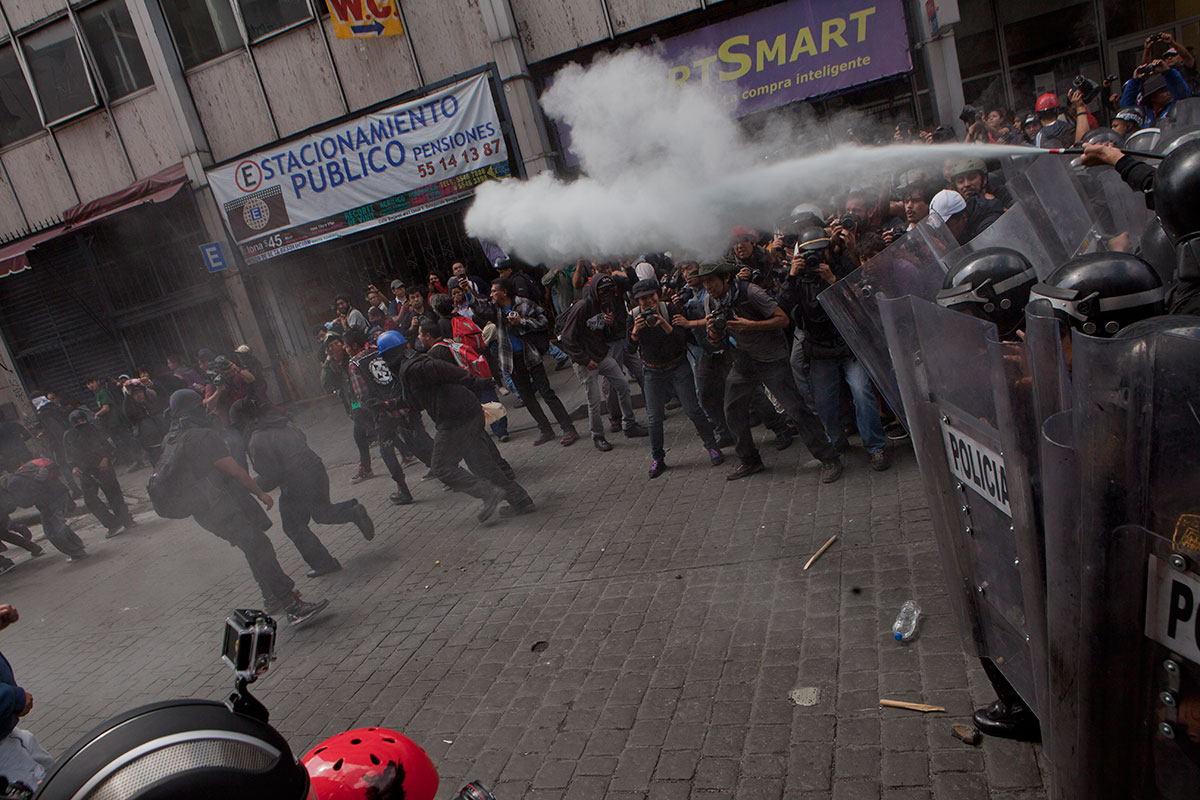 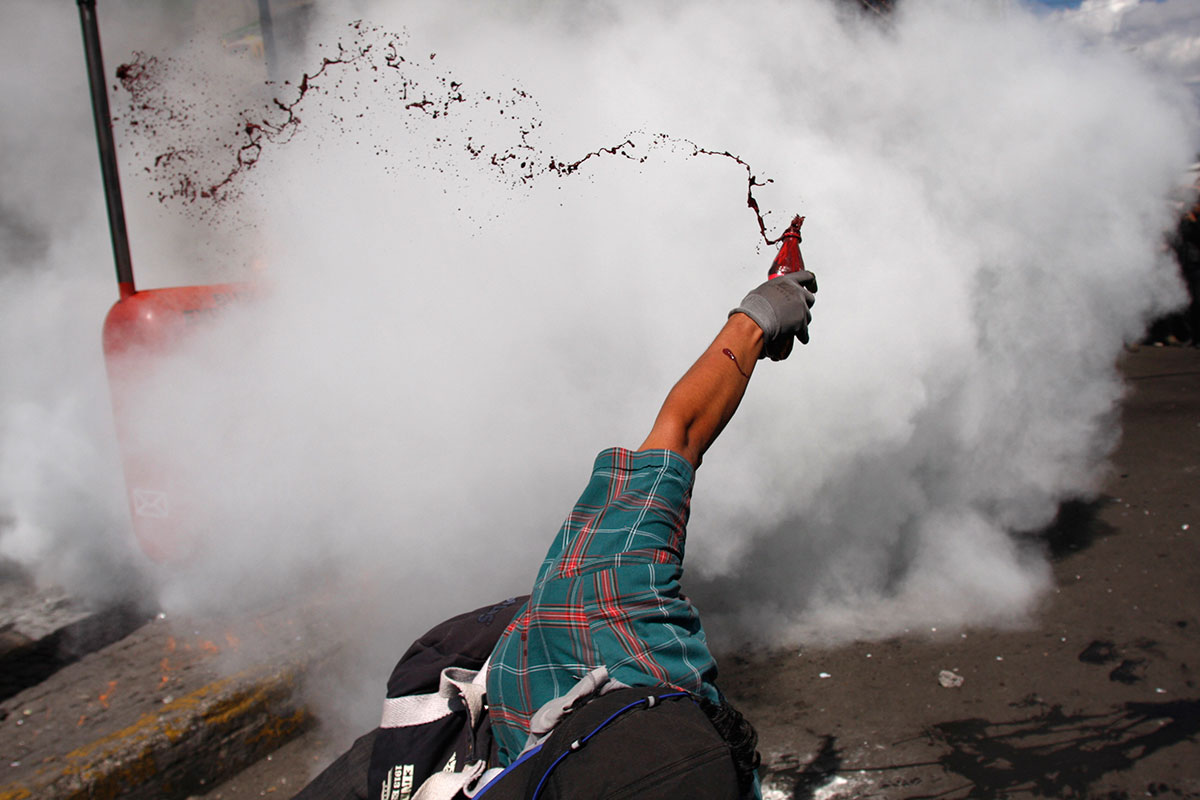 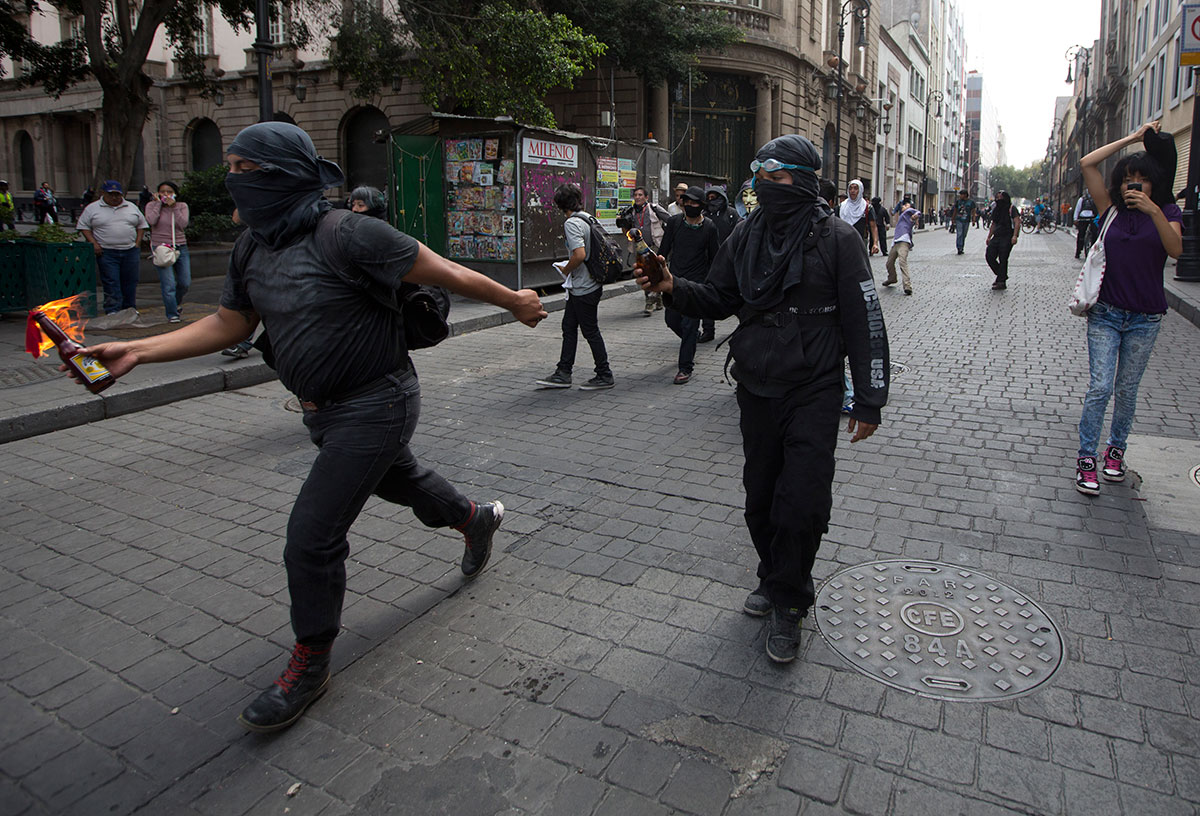 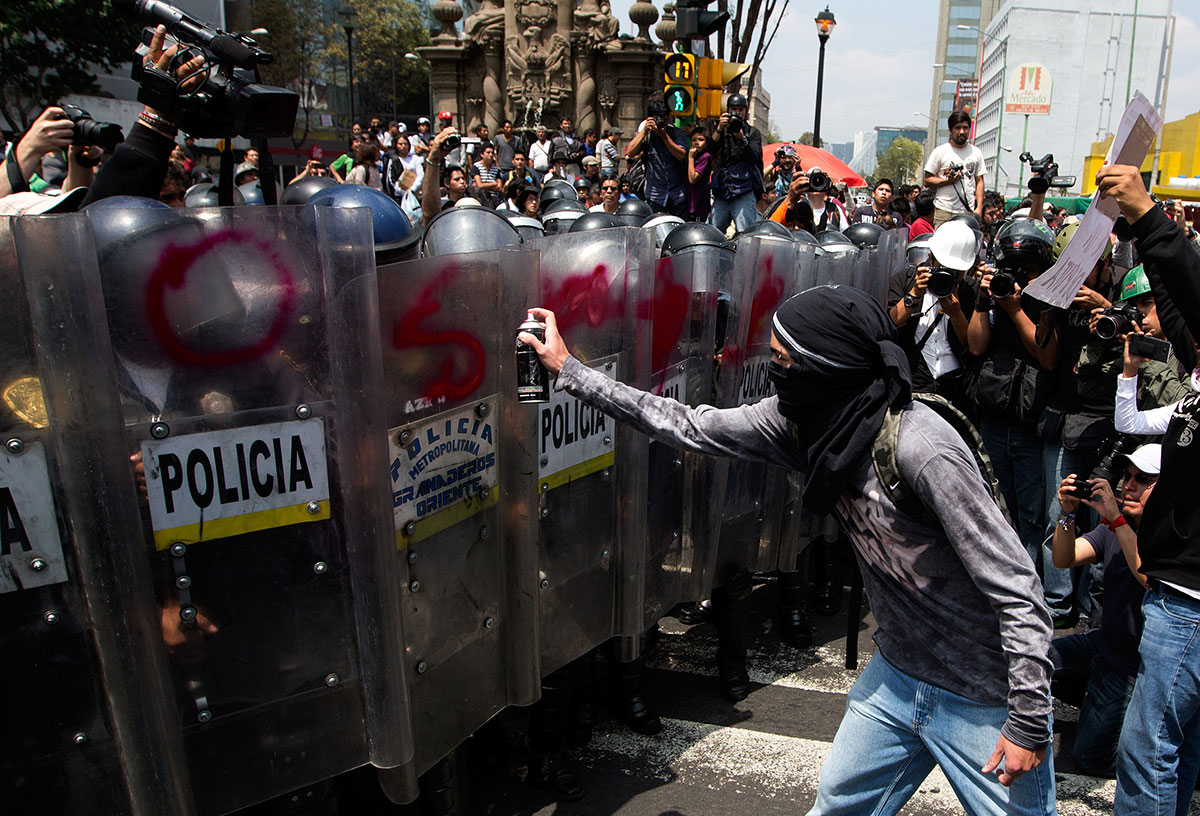 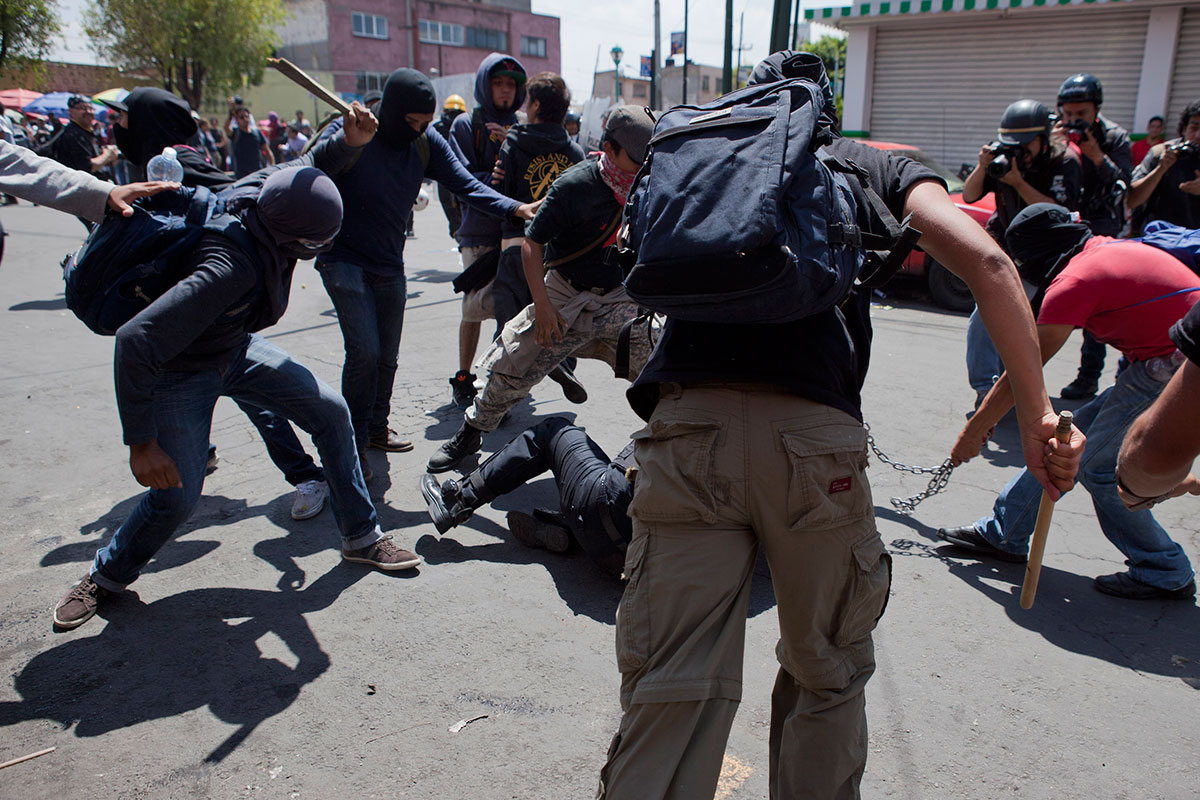 This entry was posted in Actions and tagged Mexico, Mexico City. Bookmark the permalink.

2 Responses to Mexico: Clashes during the protests against energy reform (photos, videos)