Call for an international week of solidarity with anarchists in Mexico facing repression (March 17-24, 2014) 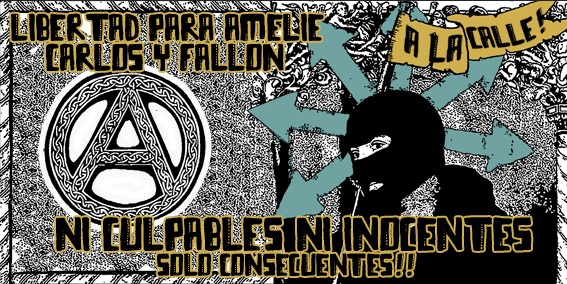 This is a call for international solidarity with anarchists in Mexico facing repression, whether they are stuck behind the iron bars of prison cells or hiding out for their freedom.

The state of Mexico has turned its attention to the blossoming anarchist space that has been actively attacking the state’s defense apparatus, the very foundation upon which it stands. Now is the best time to draw inspiration from the anarchist space in Mexico, and to show some love to our imprisoned comrades. The history of Mexico is very rich, and cannot be summed up in a text such as this. What can be mentioned, however, are the efforts that have been made to live in conflict with the state. This call comes at a time when the anarchist space in Mexico has been actively contributing to a struggle against power and domination. Attacks on police vehicles, banks, government buildings, and other symbols of power have led the Mexican state on a hunt to persecute those who have effectively threatened their foundation of social peace.

There have been several recent instances of targeted repression of anarchists in Mexico: the arrest of Mario Tripa in 2012 and his recent re-arrest in January 2014, the ongoing detention of Mario Gonzalez, the kidnapping and incarceration of several anarchist comrades, the barring of Alfredo Bonanno from entering the country, and the torture, interrogation, and deportation of Gustavo Rodriguez. There has been a strong response to this repression by anarchists in Mexico, who have celebrated the courage of their companerxs through sustained attacks in active solidarity. Between March 17-24th, we are calling for international strength and solidarity to be shown with anarchists in Mexico facing repression. Now, at a time when the eyes of the state and their dogs have turned towards our comrades, we are urging the act to be returned in kind.

“However, even given the imminent state of control, there are still those who aren’t frightened, those who by day or by night, alone or collectively, with fire, fire-works, blockades, explosives or firearms, show that this is not the life we want, that – at least from our perspective- this system must be totally destroyed. Their damned social peace is a myth that they attempt to impose on us. Only conflict exists…It’s clear that we have to take control of our lives and our spaces; to be able to achieve it there is no other way out than Social War.”

[Image reads: Freedom for Amelie, Carlos, and Fallon; To the street!; Neither guilty nor innocent, only consistent!!]