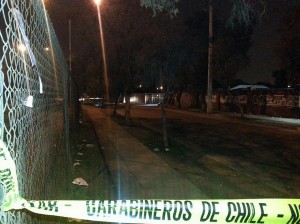 During the early morning of July 11, 2014 anonymous individuals placed an explosive device in one of the many police dens which crowd the city.

This time the Lo Prado 44 station on N°5829 San Pablo was the target of an explosive attack which detonated at the back gate of the building.

The device -as indicated- was composed of Trinitrotoluene (TNT) placed inside a metal object which after being detonated physically damaged the station’s gate, the metal structure, part of the wall, and nearby windows without injuring anyone.

The GOPE and LABOCAR police squadrons came running to the station and attempted to gather evidence without finding pamphlets nor markings claiming the action.

Video from the press (ES)

This entry was posted in Communiques and tagged Chile, Santiago. Bookmark the permalink.