Mexico: Strike after strike, a recount of Black September

from 325 (this text is about a month old but helps provide context for recent events in Mexico and the joint statement of insurrectional and eco-anarchist groups in Mexico, below):

On the first of September the press reported that a package containing explosive material had been found in scientific research laboratories within the School of Advanced Studies, Cuautitlán campus, in the State of Mexico, the school is owned by the National Autonomous University of Mexico (UNAM). Even then the threat was latent.

A few weeks before this action, newspapers read: UNAM to challenge anti-technology group, will continue with its Nano Science development. Obviously it was referring to Individuals tending towards the Wild (ITW) [Individualidades Tendiendo a lo Salvaje – ITS].

The ASE anti-explosives unit de-activated the package, which according to the University authorities was destined for a Professor of a Nano Technology branch. The indignation created was huge and ITW was successful in causing a blow to the two most important Universities in Mexico, the Tec de Monterrey (private) and the UNAM (public).

With this individual attack, although foiled, Black September would begin.

The Terrorist Cells for Direct Action- Anti-Civilisation Fraction (TSDD-ACF) claimed responsibility for the explosive attack against the National Institute of Ecology and for the placing of a false bomb with a message against the Bio-pharmaceutical IFaB on the 5th of September in the Coyoacán area in Mexico City, Federal District. These actions happened quite a while ago, with the former happening in April and the latter in December last year. In their communiqué, the TSDD-ACF made an extensive critique of reductionism and of civilisation itself.

These actions were hidden by the Mexico City government, even still, the attacks would continue.

The Animal Liberation Front claimed responsibility for actions in support of Tortuga from Chile on the 12th. A lizard and tortoises were freed, one KFC was vandalised, and another attacked with fire, and an attempted arson attack on an Ostrich Farm truck which was interrupted by a guard that ran after the compañer@s, without however being able to detain them as they sped off on their bikes in the municipality of Zumpango in Mexico State.

The next day, on the 13th, in Lomas de Chapultapec- one of the most ‘protected’ zones of Mexico City, an explosives device was detonated in front of a Banamex Bank, the press reported the event and in an interview the miserable police chief Miguel Ángles Mancera mentioned that the device had an electronic circuit with a clock as its detonator, which to him seemed strange seeing as very little devices used in Mexico City have been of such a composition. Technique, Mancera, technique!

On the 1th, the Autonomous Cells of the Immediate Revolution- Praxedis G. Guerrero (CARI-PGG) claimed responsibility for an explosive attack against a Mexico State police truck in the municipality of Nezahualcóyotl in Mexico State. That action was also hidden by the authorities.

For the 21st, Individuals tending towards the Wild claimed responsibility for the package that was found in the FES installations on the first of September and made themselves responsible for another explosive package that was addressed to the director of INIFAP in the Coyoacán area of Mexico City, this last action was also hidden.

In their long communiqué, ITW discussed diverse themes including leftism, the psychological consequences of living in civilisation, neurology, promiscuous or indiscriminate solidarity, and critiques of the Techno-Industrial society. Being a support for those who wish to abandon the traditional critiques of the system and further deepen them still.

Two days later on the 23rd, an explosive device was detonated at the offices of the Federal Electricity Commission (CFE) in the Iztacalco area of Mexico City. The television news showed the video footage of a shadow suddenly appearing, leaving a bag in the doorway and leaving. A few minutes later, a large explosion was recorded.

The material damages were considerable and the deed was later claimed by the Autonomous Cells of the Immediate Revolution- Praxedis G. Guerrero.

On the 26th a text was published on diverse webpages signed by a number of Eco-Anarchist and Insurrectionary Action groups making a call-out to avoid participating in the October 2 March (a march which commemorates the hundreds of combatants massacred by the government in 1968 in the lead-up to the Olympic Games).

It had come to the attention of the compañer@s that the Mexico City government, feeling impotent at not having found anyone else to throw in their jails, had planned a wave of repression against the anarchist contingent (planned hand in hand with the Communists–evidently annoyed at losing the limelight and their ‘recruits’ to Anarchism. transl.) as it has attempted to do since the Black September of 2009 when there were a multiplication of action groups, mostly Eco-Anarchists groups, around the Mexican Republic.

In the text signed by the various groups, it was pointed out that there were other forms to fuel the conflict against the State other than a march that by merely attending it was like putting yourself in the wolf’s mouth. However, there were a few ‘masochistic’ groups (anarcho-“legalists”) that put out propaganda saying not to take the text into account and called for anarchists to participate in the march, perhaps so that they might have something to do afterwards when there were detentions, their substitutionary activity of anarchist activism that relies on the tradition of repression in demonstrations to be able to follow on with this artificial activity.

When the day of the 2nd of October arrived, with September having ended, the propaganda by the deed was accomplished and a few encapuchad@s (masked ones) went to the streets to march. According to the press and the authorities no one was detained, and there were no considerable incidents. However in the Tlatelolco metro station, from where the march would leave, the police confiscated gas masks, aerosols, glass bottles, poles and other objects from demonstrators. More than 4,000 police watched over the march, plus all of those infiltrated within the contingents, undercover cops and all of the cameras that were pointed at any sign of encapuchad@s. Well, there may not have been riots in Mexico City, but the same didn’t occur in the city of Chilpancingo in the state of Guerrerro, as various banks, shopping centres, businesses, traffic lights and vehicles were destroyed by young encapuchad@s, as were various convenience stores looted, more than thirty people being arrested during the riots. In other parts such as Oaxaca and Chiapas anarchist presence was also noted in the marches.

But the more notorious news item was the enormous fire that spread throughout the Wal-Mart supermarket on the 30th of September in the Cuauhtémoc area of Mexico City.

The fire was noticed around 5:30pm in the afternoon and the smoke was able to be seen from various parts throughout the Monster City. More than 3,000 people were evacuated from the shopping centre. At the same time in the city of Guadalajara in the state of Jalisco another fire took place in a shopping centre (a coincidence? Don`t think so…). By the 3rd of October, the group Conspiracy Cells of Fire – Jalisco (Fraction of the FAI Mexico) claimed responsibility of being the authors of the fire in a communiqué published on various web-sites. Again, the miserable Mancera gave false declarations to cover up the truth, saying that the fire at the Wal-Mart had been caused by a short-circuit. This time, however, his strategy to hide the truth didn’t bear fruit at the press quickly published that the anarchist group had been responsible for the fire.

The CCF-J did not only claim responsibility for the fires at the Wal-Mart in Mexico City and that of the shopping centre in Guadalajara, but as well for another two arsons that were reported by the press and whose origins were still unknown (or hidden). One, which severely damaged a warehouse in the Coyoacán area on the 27th of September and the second on the 28th, which damaged the installations of the CONALEP (airport staff training school) in the Venustiano Carranza area, the fire was registered in the morning of that day and the students had to be evacuated.

In the middle of the night on the 3rd of October, a home-made bomb detonated within the ATM area of a Santander bank in the Tlalpan area of Mexico City. The explosion left severe material damage- windows shattered, the ceiling and roof fallen in, the ATM rendered useless as well as minor damage to the National Institute of Respiratory Diseases that was across the road from the bank. The authorities declared that it is very possible that the action was carried out by the anarchists. (The action was later claimed by the CARI-PGG. transl.).

All of these deeds reveal the potential of Anarchist, Eco-Anarchist and Anti-Civilisation action groups, the scene is evolutionary, and although the government hides the information, the flames do not burn out, they continue extending and are unstoppable. 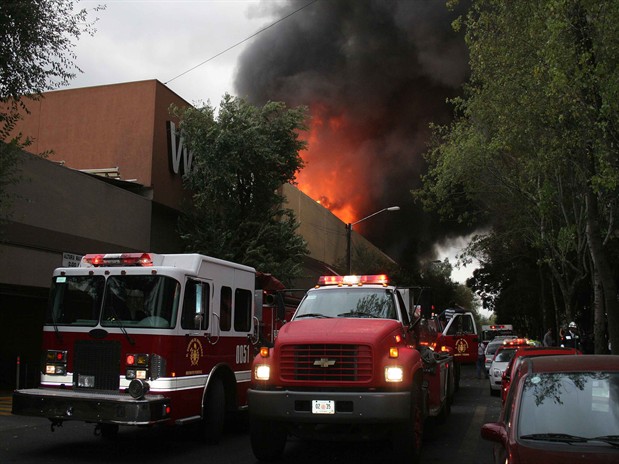 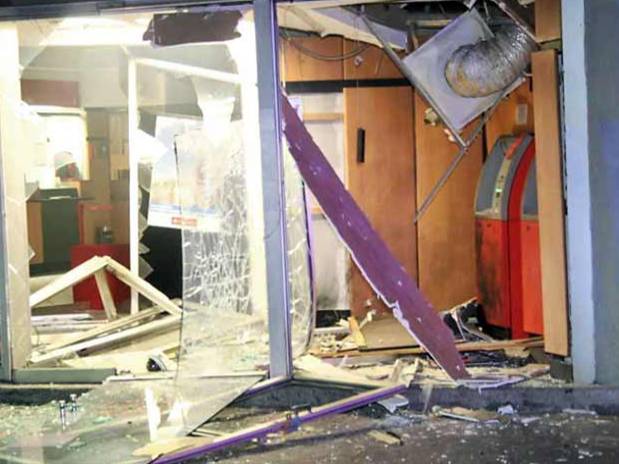