Graffiti that appears linked to a confrontation between Occupy protesters and police at Compton Hill Reservoir Park last week has appeared at the park.

The graffiti, which includes phrases like “Class war,” “The city has blood on their hands” and “Cops, pigs, murderers,” was sprayed on buildings, walls and statues at the park on Grand Boulevard just south of Interstate 44.

Paint on a door labelled “park police” reads “Only the blood of the rich will stop Occupy.”

Police have not released any information about the graffiti incident yet.

The park was the site of a confrontation Thursday night between Occupy Midwest protesters in town for a regional conference and police trying to enforce a park curfew. More than a dozen protesters were arrested. Two of them were injured.

A police car window was smashed in the incident. No officers were hurt.

The home of Eddie Roth, public safety director for the city, was also hit by graffiti recently.

“I am not condoning it,” she said. “I frankly don’t know who is doing it, but clearly it is an attempt to express anger and frustration. It speaks to frustration that people feel over a hopeless situation with the police.”

In an emailed statement, Roth said he and his family are “annoyed” about the vandalism at his home but grateful to have received many “thoughtful expressions of concern.”

Roth said he doesn’t think the vandalism “is representative of the Occupy movement in St. Louis, which is one of the reasons we have tried to keep it low-key. But it does point out the need for the Occupy participants who are passionate but responsible to push back against the few who are intent on being destructive.” 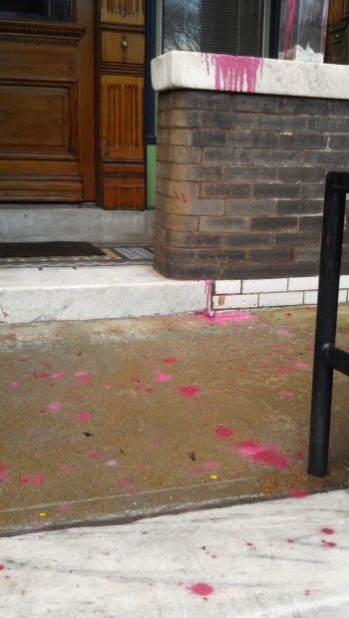 This entry was posted in Actions and tagged #Occupy, St. Louis, United States. Bookmark the permalink.