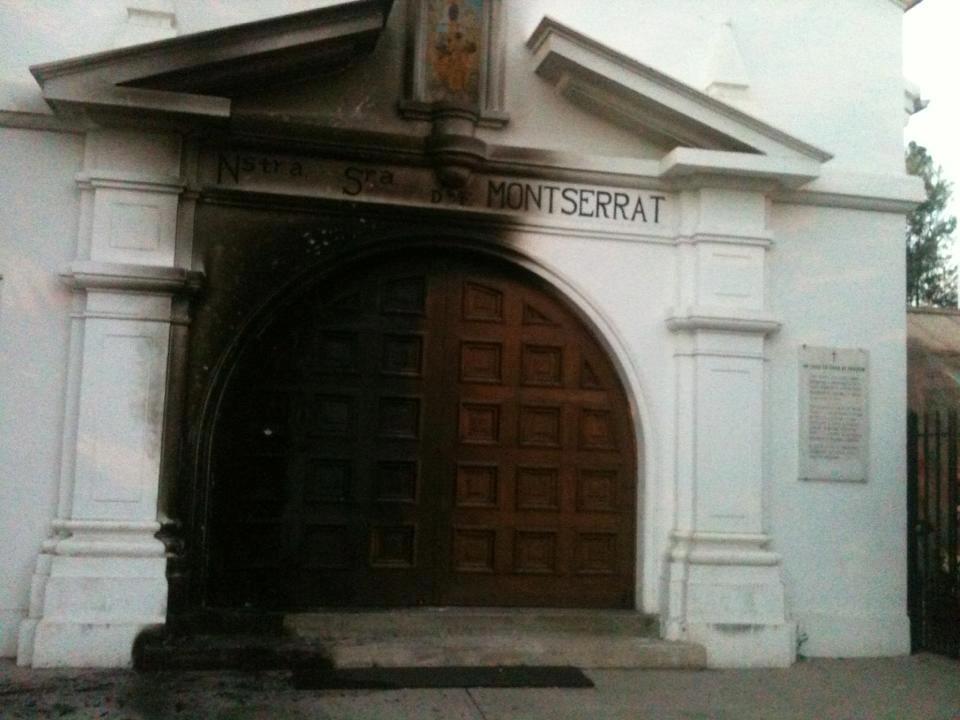 We claim responsibility for the incendiary attack made in the early hours of Tuesday February 12th at around 3 am against the Our Lady of Montserrat Church located on Luis Matte Larraín street, in Puente Alto, with an incendiary device with a fuse, detonated in the vulnerable front of the church, causing material damages mostly to the main door, as well as damage in the heads of the hundreds of subjects of order and power who meet there day and night.

Even though at this time the damages were superficially disguised, and this action was not published by the media of the police State, there emerges the political need to claim this attack, since we do not want to be confused with satanist, religious or fascist groups or sects. Our motivation turned into a revolutionary action against power and the bourgeois prison society, understanding this action not as one that revolves around a plan ruled by an aim to establish another imposed social model as a replacement for the present one, but as an action that seeks to destabilize society and make evident the conflict inherent in it, based on the destruction of every trace that represents, produces, and maintains power in its control, ownership and valorization of our lives, to one day thus achieve along with our peers our total and definitive emancipation.

And at the same time with this communique we want to make a call and an invitation to all the individuals in affinity, to permanent armed agitation; to continue making evident the conflict that the so commonplace social peace as a police discourse as a mode of the spectacular bourgeois society tries to disguise; to spread technical knowledge and promote a conspiratorial culture and security culture between those who situate ourselves on this side of the barricades, to thus not fall into the enemy’s clutches, since history has shown us that we pay dearly for every error, and every compañer@ in prison is a trophy for Power.

The urban guerrilla spreads and sharpens like a plague: every day we are more prepared, with more knowledge, more equipped with tools and materials, and above all every day we are more individuals and/or groups who self-organize and without waiting in fear for better times, we make ourselves part of history and we make ourselves a conscious and responsible part of this war against the executors of life and maintainers of this complicit society.

Finally, days before our attack we heard the bad news about your imprisonment, and without knowing you, even just your firm stance against the police repression of Capital filled us with more reasons to activate the charge that night. Therefore we send a special embrace from the conspiratory camouflage to the compañero Victor Hugo Montoya, we hope that the heat of our actions arrives in your cell and that the solidarity is manifested. Strength, compañero, you are not alone!

Churches are only illuminating when they are on fire!

Freedom to Victor Montoya and all the prisoners!

This entry was posted in Actions and tagged Chile, Victor Montoya. Bookmark the permalink.