“Bomb Threat: An immediate response to all the infamy”

March 2013 was a month marked by bomb threats which could be related with the direct or indirect activity of the group Individualists Tending toward the Wild (ITS) or those who support their actions.

On March 6th an anonymous call about the explosion of a bomb in the University of Valle de Mexico, Victoria Campus caused the evacuation of dozens of students from the premises of the prestigious university in the northern city of Tamaulipas. It is worth mentioning that this city has had a large number of threats of this kind on various universities, and each of these has occurred soon after some attack by ITS. This could be seen some weeks after the attack on the Monterrey Tec, Mexico State Campus in August 2011. Various universities in Tamaulipas (as well as Puebla and Hidalgo) received bomb threats during August, September and October of that year while ITS’ campaign kept its course (see the chronology from our previous analysis), so it is not strange that after ITS’ latest attacks in Mexico City and Morelos this year, these kinds of bomb threats are made. More information here (Spanish).

ITS and the Pemex Tower?

On March 8th the US media started to publish a series of defamations and stupid accusations against ITS, the first of these media sources was Business Insider, which published an article on their website called “Mexican Anarchists Are Blowing Up Scientists and the Government Is Freaked,” an article which was criticized by the War On Society (WOS) portal. We think this critique is good and we do not want to stop and return to cite what WOS has already said, but what we do want to mention is this yellow journalist magazine pointed to the first analysis from our circle of analysis as a supposed claim of responsibility from ITS for what happened in the Pemex Tower in January 2013, something totally out of context. This circle of analysis never at any time said that ITS had attributed the explosion in the Pemex building. We support the actions of ITS and therefore we would not say anything false about their actions. Moreover, if the explosion in the Pemex Tower was an attack, the action does not follow the modus operandi of the group and we think that, frankly, ITS does not have the means (from what we have seen so far) to cause an attack of such magnitude and impact. So the great majority of what these lying journalists wrote is trash.

Three days after this magazine launched its slander, that is on March 11th, a night-time anonymous call warned of the presence of an explosive device about to detonate right in the Pemex Tower in Mexico City. Coincidence, or consequence? We say the latter. That same day, but in the Pedagogical and Technological University of Tunja in Colombia, an explosive device was found made of a PVC tube, an attached cell phone and traces of chlorate. The press reported that the device was able to explode, although it was discovered by a warehouse worker and deactivated by the police explosives specialists. After these two cases we may ask, does ITS have “tentacles” inside and outside of Mexico? Or is some group distant from ITS (but which supports its actions) responding in this way to the press’s slander as happened last February in the universities of Nuevo León and Hidalgo?

A “downpour” of foreign misinformation

On March 12th, another magazine mentioned of the group in question again, of course with false information and errors taken from Business Insider and apparently from the 24 Hours article (critiqued in our second analysis [Spanish]).

The famous magazine Wired, which specializes in topics of technology, business and culture, published an article entitled, “In Manifesto, Mexican Eco-Terrorists Declare War on Nanotechnology.”

To begin, the article carries a header image of a pinta which has to do with a fugitive Chilean anarchist, something that has nothing to do with ITS.

What calls attention is the short interview that this magazine did with the English author, analyst and “expert” in armed and terrorist movements, Roger Griffin.

The author of the book Terrorist’s Creed: Fanatical Violence and the Human Need for Meaning says that people who see technology as bad have a paranoid vision of reality. These kinds of lines are normal for people like Roger Griffin: relativist, reductionist and progressivist people who do not see beyond the simple-minded analysis that the system allows them to see. We who are against modern technology and against civilization do not have a paranoid vision of reality; what’s more, reality indicates rather convincing scenarios in order that there arise more intelligent people positioning themselves against the techno-industrial system, critiquing it and attacking it. While many of the words set out in the “Unabomber Manifesto” are being fulfilled today, these yammering analysts go on with the same old story of last century, irrationally denying reality and saying that ideas against technology and civilization are the result of paranoid minds. On On

It is worth mentioning that the head of this same magazine, Kevin Kelly, some time ago participated in an article in which anti-technology ideas are considered viable for their best analysis.

On March 18, another famous magazine called Vice published a report titled “Mexican Anarcho-Terrorists Are Parcel Bombing Scientists,” what calls one’s attention to this article is the interview with the professor and political analyst Mauricio Meschoulam. He states that the violence of terrorist groups like ITS is the consequence of the deterioration of the country’s social and political security, and the increase in generalized conflicts all over Mexico since the beginning of the “war on drugs” (if not long before). We think this is right in a certain sense, since it is clear that in the case of ITS the group along with its position “set off” from the increase in anarchist violence registered since 2000, but with in a continual following since 2007. Already in 2011 the ITS group started to “blow up” scientists. But we cannot fully attribute it to these kinds of situations since there were surely other circumstances which made the ITS group form. The political and the environmental are very different things, although sometimes they go together, there are some exceptions.

The article says several times that what ITS is doing is in vain, that it will not gain anything by continuing its campaign against the techno-industrial system, something that we (the intelligent readers of ITS) know very well. Attacks are only the means, not the end. It is not an end to kill or wound one scientist or another, since it is clear that even if the majority of scientists and researchers in Mexico were assassinated, civilization and the system itself would continue their course in one way or another. Progress cannot be stopped by these kinds of actions, that much is obvious, and we accept it since it is the harsh reality. The end itself is the defense of wild nature, scientists and their laboratories are attacked for this same reason, since the defense of wild nature knows no limits, no compassion, its defense is fierce and the results of this war (nature-civilization) will be severe. We as a circle of analysis say this: we are sure that in the future the struggle against the techno-industrial system will radicalize even more.

On March 21 a recognized French blog published an article entitled “Mexique: des éco-terroristes menacent les scientifiques,” this text like others that came to the public light in the foreign press is a copy of another copy. Apparently they are alarmed by ITS’ actions, but they deliver a mountain of distorted information that only ensures some kind of scare in response to these offenses.

Four days after (March 26th) this last article was published by the foreign press, an anonymous call warned of the presence of an explosive device in three offices of Correos de México (a business that has been used by ITS recently to send its “correspondence”) in the city of Hermosillo, Sonora. According to the call, the explosives would go off in a coordinated fashion at midnight. The anti-explosives police arrived at the place but didn’t find any suspected device. We remind that Tamaulipas as well as Sonora are states bordering the United States–could these kinds of bomb threats have been made close to the United States to respond to the infamies of their press? The response came that very day (March 26), since another anonymous call was made to evacuate the University of Texas in El Paso (UTEP), which is located meters from the border with Chihuahua. The authorities wanted to not alert their students so and didn’t mention anything about the bomb threat until all the students were outside the campus.

Three days after these events were intertwined (March 30th), showing that they were coordinated bomb threats in Mexico and the United States, the main French symbol of civilization was also evacuated by a threat of the detonation of a bomb. Around 1,500 people were evacuated from the Eiffel Tower in Paris. Remember that France is one of the countries where there is a widespread rejection of nanotechnology (a key topic in ITS’ positions from their beginnings), and that doubtless ITS’ communiques in France are like seeds in a fertilized field. Maybe the article from the French blog was used for responding in this way against a symbol of civilized progress, some days after its publication and the other bomb threats? Or could it be that perhaps their note had served to spread (specifically) ITS’ ideas against the system from Mexico to France?

Whatever the case, this year has been marked by a growth in the spread of the critical position against civilization and against the techno-industrial system; evidence of this are all these facts which coincide and show that even though these acts are not claimed, the majority are closely related (see the map at the end of this text).

The bomb threats already spread outside of Mexico. When will they be carried out? 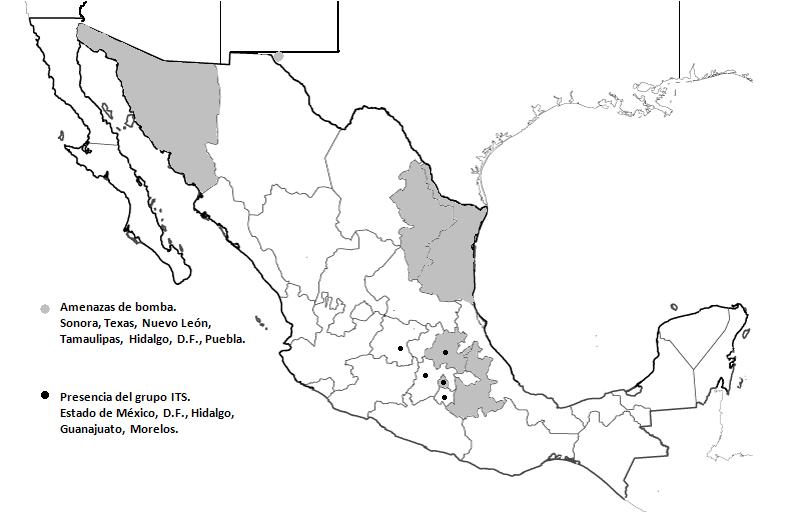 This entry was posted in Communiques and tagged "Obsidian Point" Circle of Analysis, Individualists Tending toward the Wild, Mexico. Bookmark the permalink.