Chile: Letter from Juan Aliste and Marcelo Villarroel to the comrades in Argentina 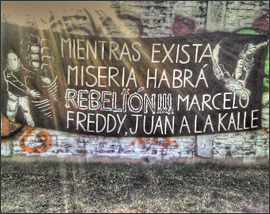 It is here the word solidarity turns into fire and praxis, it is here where we carry complicit glances, crossing fictitious imposed borders, joining in a cry for freedom, taking aim at the the center of the capitalist stench and its sound of misery.

With a combative embrace we greet you with all of our solidarity, our hearts  replenished as we remember each gesture, each action and decision. Rebellion fertilizes, lets us take up battle and resist, take control of our own lives, suck the oxygen of emancipation, unmasking every form of submission, slavery, and reform. We have nothing to do with the Capitalist State encrusted historically in consumption, alienation, and indifference.

We are enemies of the Capitalist State transported before a social inquisition, sheltered and policed by the patrons of capital. From subversion we make a revolutionary continuum, where the antiquated hierarchies and structures give way to our own true capacity, as individuals or as many.

Constant direct action and propaganda in a growing social war- where the peace of the rich is disrupted on each corner, where the powerful and their lackey guardians feel the expansive wave of resistance ruining their repressive impunity.

Dear compas, know that we stand upright and ready beneath the transitory condition of the Chilean State’s bars, unconditional in the adventure of life for a different world- where exploitation, the oppressor, and dominating bourgeoisie violence have no oxygen.

A giant embrace to all of you. Until next time.

WHILE MISERY EXISTS, THERE WILL BE REBELLION!