Chile: Commemoration of the Day of the Combatant Youth (photos) 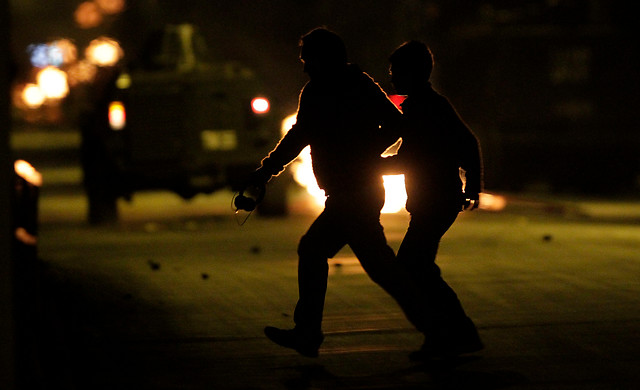 from insintosalvaje, transl. by wos:

March 27, days prior to the day of the combatant youth

The first manifestation was around 8 am at Manuel Barras Borgoño, where a group of students threw molotv cocktails inside the school, which forced the establishment to be evacuated and classes to be suspended this Friday.

At the National Institute Barros Arana, INBA, 300 students burned tires and erected barricades at the corner of Matucana and Catedral, resulting in a minor of 14 being apprehended.

At Amunátegui and Cervantes High School, located in the same area, barrricades were also constructed this afternoon. This ended with 2 students from Amunátegui detained.

Also at Darío Salas High School there were manifestations during the afternoon, which were dispersed by the Special Forces.

We are informed that one adult and around 18 minors were apprehended.

Saturday March 29th and the morning of Sunday March 30th

The incidents began in the San Bernando Community, where a group of encapuchados tried to burn a bus and threw molotov cocktails at the police. In La Pincoya and Villa Francia there were also confrontations and cutting of electricity.

During this time, at the beginning of the incidents, a camera person from Chilevisión who was covering the protests in Villa Francia was hit with 2 pellets, one of them in the face; this was in addition to the shooting of the El Mercurcio newspaper vehicle, which went through the windshield. In turn, incidents occurred in the población La Victoria, in which 4 individuals were detained who were brutally beaten by the police and remain in preventative prison starting for two months in accordance with the stipulation by a judge of the 10th court of guarantee, in which the men will serve in the Santiago 1 jail and the women in the San Miguel jail, the accusations brought against them are: attempt to burn a bus with danger to persons, attempted homicide (on a police operative), transport of incendiary arms, forced entry of a residence
(dwelling in which they were admitted to hide from the police), and violation of the anti-terrorist law, in all resulting in a possible sentence of 5 years and 1 day to 10 years.

This was in addition to the burning of a Transantiago bus at La Serena Avenue and Padre Esteban Gumucio in the La Ganja community and a cop being wounded by a bullet in the forearm in los Morros, in the San Bernardo community. This as well as in the Huechuraba community, where many failures in the electrical system occurred.

In the city of La Serene, tires were burned  around Atena and 18 de Septiembre. In the Valparaíso region confrontations with the police occurred as well in Cerro Barón, which were later dispersed by the police. After this one 14 year old minor was arrested for the transport and possession of illegal firearms, after an artisan made shotgun was found in his backpack.

Specifically in the Estación Central community, in Villa Francia, the first barricades appeared which cut vehicle traffic at 5 de Abril street, at the 8 de Octubre intersection. Just like the early morning of today, when some burning barricades were constructed, provoking the first confrontations between around 100 protesters and personnel from the police special forces. At this location the vehicles that shoot water and tear gas gathered, alongside an ample police contingent of the FF. EE. (special forces). Also an attack by 10 encapuchados who threw around 5 molotovs at a vehicle which shoots tear gas was reported. In the Pudahuel community burning barricades were also erected, specifically at the intersection of Laguna Azul and La Estrella streets. 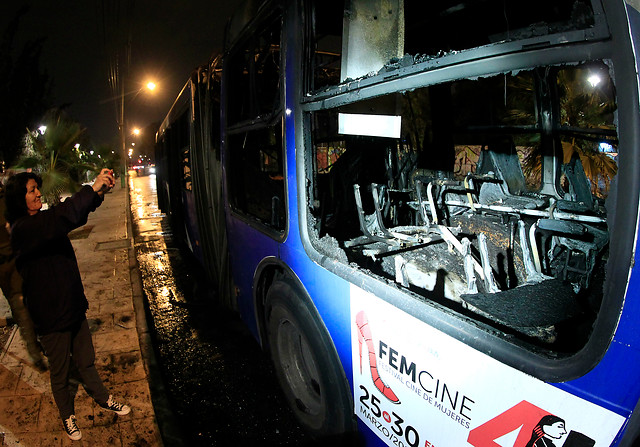 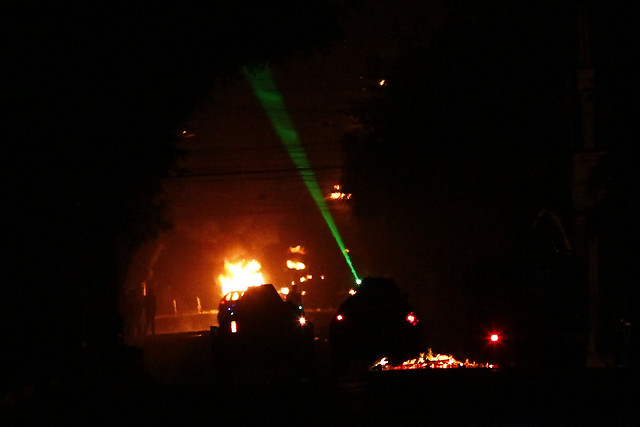 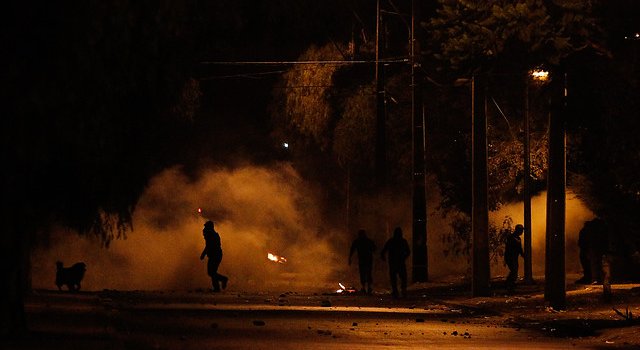 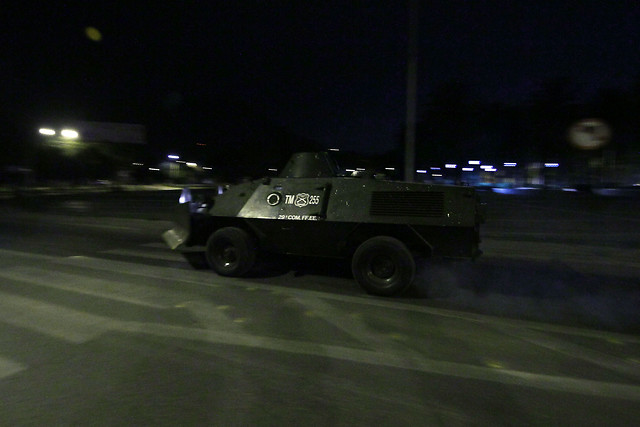 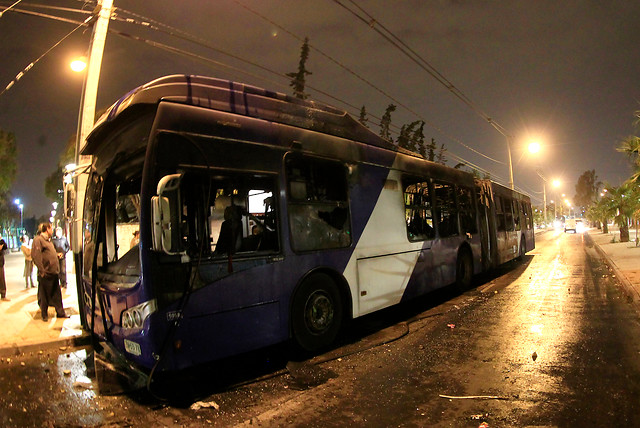 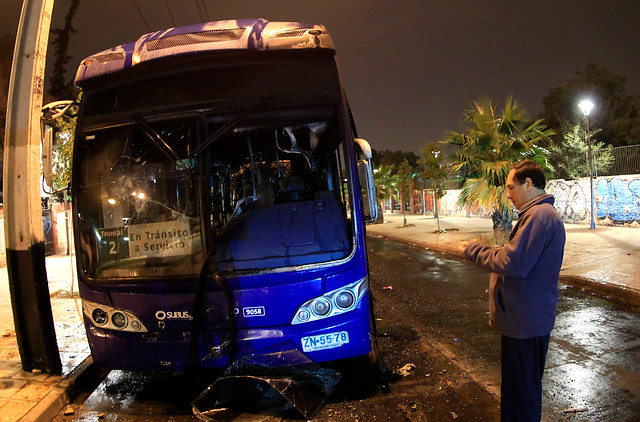 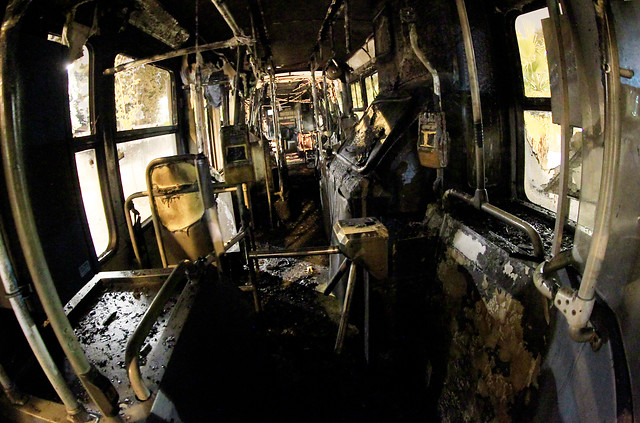 This entry was posted in Communiques and tagged Chile, Day of the Combatant Youth. Bookmark the permalink.