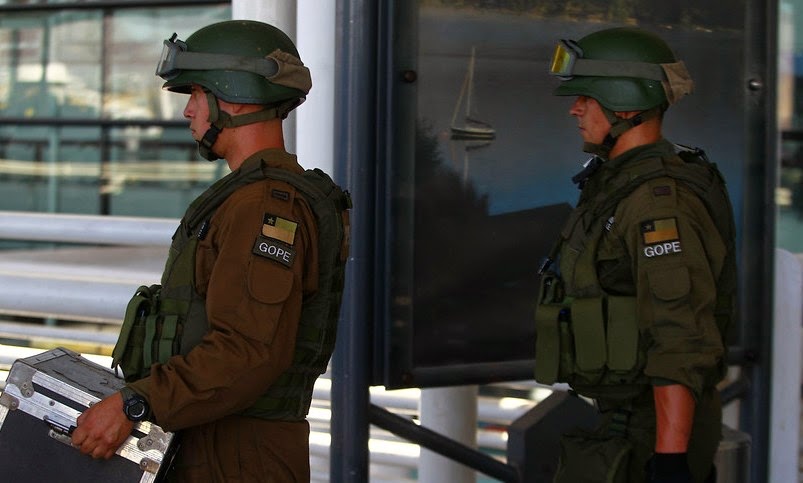 The following is a communique found at the Church Immaculate Conception in the comfortable neighborhood of Vitacura, in Santiago, Chile. According to the bastard mayor Marcelo Lepín, the bomb consisted of black powder compressed in a gas tube, activated by a clock system which failed. Also the GOPE did a controlled detonation, without any injuries.

The bomb was found the morning of March 29th by workers remodeling the temple who alerted the police, bringing the henchmen of the 36° station to the area. We remember that this church was left damaged by an attack carried out by the Mauricio Morales Vengeance Group (see here in es).

Aside from this, today while they carried out Sunday mass a bomb threat forced them to halt the ritual.

The following is a communique found at the site and spread by the press.

MAY THEY KNOW THAT WE DO NOT FIGHT TO WIN, BUT TO SEE THEM FALL!

WHEN OUR AIM IS THEIR DESTRUCTION WE LOOSE OUR FEAR!

Our fight is for the destruction of all of this existent society of trash, created by and for the bourgeoisie. We will not rest and will not let them rest, we are always on the daily and constant attack, alert, with hate, with rage, decided and convinced that their is no return, that their will not be a “more just” society, that prisons will not be ended, that not one form of domination will be better that the previous, that we will never stop being their enemies. This is why we are convinced that the most concrete way to carry out our lives/this struggle is through propaganda of the deed, with the attack, with direct action.

This time we decided our objective would be one of the most responsible for the sinister actual misery of this society, with the domination and alienation of clergy, of religion, of the church, responsible for so many massacres, of human idiocy, of expropriations of the earth, thinking themselves owners and fathers of all…They have to fall! In our eyes tonight, we will see them explode with delight and happiness, they will know they are not armored, that they are not immune to anything, that they are as vulnerable as any police station, we only want to see them burn!

On one side we are accompanied by Angry, Mauri, Matías, Claudia, on the other side our sequestered compas walk with us, Sol, Mónica and Panchito, Juan, Freddy, Marcelo, Carlos, Hans, Victor, Alpaca and Hermes, Alberto Olivares, we will see them with us soon, they are present in each attack, never defeated, never silenced.

May this and many more explosions burst in your faces, owners of the world.

With resistance and love to the Vergara Toledo family. 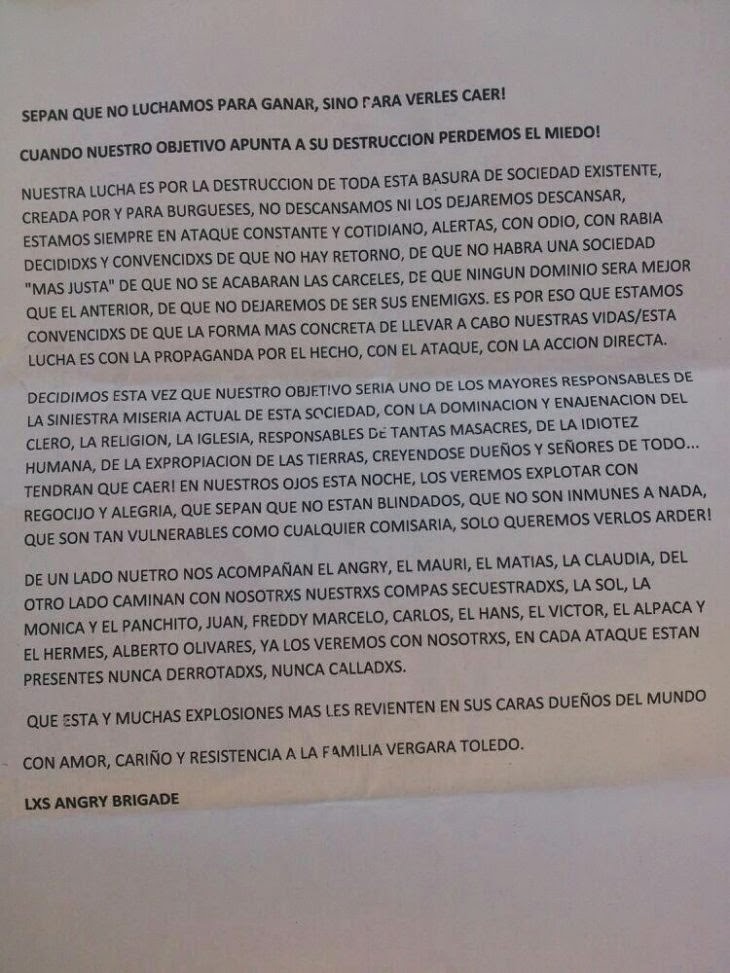