Spain: Update on the situation of Mónica and Francisco 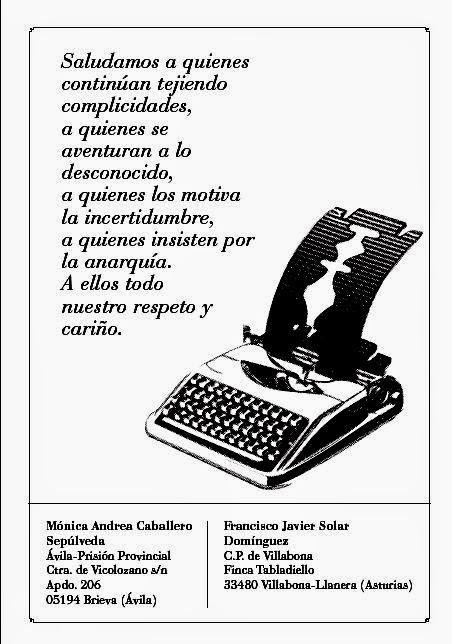 Today, Saturday April 12, after passing through several prisons (Madrid, Burgo, Cantabria) throughout the week, our compañero arrived in Asturias, where they abruptly decided to transfer him.

Several weeks ago, we communicated through various media that Fransisco was in a pretty bad situation due to isolation. Although the situation has changed, surely due to pressure from outside, he remains in a punishment wing, separated from the rest of the “political” prisoners, although in a relatively better situation and they have allowed him, after many months, telephone calls with friends, since the prison’s warden had only allowed calls with family members.

We know that he is well and strong, and we hope to be able to visit him soon.

Mónica remains in the same situation of the past months, and she is also doing well in spirit and strength.

Both compañeros remain in preventive prison and at the moment nothing makes us think this situation will change. Nor is there much news in the case or the charges against them.

They remain in FIES 3, with eight 5-minute calls per week, restriction of correspondence (only 2 letters per week) and we know they still have no limit on how many letters they can receive, one weekly visit of 40 minutes and dispersed in the prisons of Brieva (Ávila) and now Francisco in Asturias, both distant from their friends and compañeras, the so-called “dispersion” as the way of punishing political prisoners or rebels, seeking to exhaust the strength of those who go visit them.

For any questions, information or comments: solidaridadylucha@riseup.net

Here is a poster with their addresses to hang in your spaces:

We salute those who continue weaving complicities,those who adventure into the unknown,
who are motivated by uncertainty,
who insist on anarchy.
To all of them, our respect and affection.

This entry was posted in Updates and tagged Francisco Solar, Mónica Caballero, Spain. Bookmark the permalink.