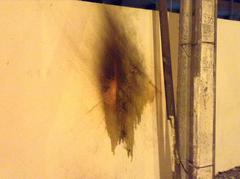 During the early hours of March 31, 2015 a group of anonymous individuals carefully approached the Cavancha police station located on Salvador Allende ave with Pedro Gamboni to throw 6 molotov cocktails. 3 molotovs reached the inside of the station causing confusion amongst the uniformed bastards, without causing major injuries or damages. Excerpts from the claim:

“The violence that we present as an answer to the claimed submission by the authorities, their constant repression and alienation with the powerful has made us act with the weapons we have within our reach. The Carabineros of Chile, representing the protection of authoritarian order (today called democracy) purported by the State that is at the command of Michelle Bachelet and her followers (among them a business class and the right party), the establishment of this order does not imply the well being of any one individual nor the development of their abilities, but is established for the benefit of the privileged class and their moral hierarchy. The fight against authority, and with it submission, injustice, poverty, ignorance, and segregation, surpasses the legal methods of resolving the conflict, it is not by the legal road we intend to free ourselves form slavery, since these are the same ones who create it, it is not difficult to see day by day how the sectors of the population most dispossessed from riches enter into the penitentiary centers to comply with the sanctions of the tribunals, while the rich sleep in their recliners and eat their banquets, spending the money obtained thanks to the robbery of other’s work…

…Above all this act of violence seeks to symbolize the fire burning against the enemy, it is a call to permanent agitation, validating every act of violence that seeks to break the chains of oppression, and an act of solidarity with the fallen combatants and those who find themselves kidnapped in the state centers of extermination.

We will be like cockroaches, a plague that spreads with the heat of fire and can not be put out even with an atomic bomb…

BECAUSE WE DO NOT REST IN THE JAWS OF CAPITAL, WE ATTACK IT WITH EVERY FORM OF STRUGGLE, UNTIL THE LAST OF THEIR PROPERTIES ARE DESTROYED.”