Posted on May 31, 2013 by Gabriella Segata Antolini

When I read the news of Mauri’s death, the accidental explosion of the device he was carrying, it was a blow to the heart, even if I didn’t know him, even if I never saw him, I instinctively perceived that he traveled the same path as me. In the days that followed, the actions, the confrontations, the eviction of the place where he lived, the rage-filled funeral.

My memory turned to other days when I was locked up, some years ago, when with a sense of impotence I received the news of Baleno’s death.* Then too were the confrontations, the rage-filled funeral, Sole’s death and then too was a blow to the heart, but at that time I had the sensation of being defenseless, impotent. Today I have left that sensation of of impotence, now I know what to do. I know perfectly what Mauri felt in the moments that preceded his death. The pulsing of adrenaline, the happiness in the realization of his own desires through the action, the opposition to this shit system with whatever destructive measure. It was not a horrible death. Certainly, it would have been beautiful to continue living to strike, to strike again and again… but in any case it is the fate that we chose for ourselves.

Today his joy lives again in each individual who arms his own hands against the power that becomes stronger day after day, in the gradual and constant expansion of the black international, in the dozens of FAI cells scattered across the world, in the smile of someone who has just set fire to the gunpowder. Mauri lives in our actions. There is no turning back. 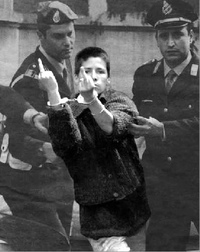 Translator’s Notes
* Sole and Baleno (Maria Soledad Rosas and Edoardo Massari) are two anarchists who were accused of acts of eco-terrorism in Turin in the No TAV struggle in the early 1990s along with Pelissero. Sole and Baleno each committed suicide in prison.

More information is here (in Italian). The image is of Sole in police custody during Baleno’s funeral.

** The author Alfredo Cospito is imprisoned in Italy accused for the shooting of Roberto Adinolfi, along with Nicola Gai. More of his writings and information on his case and imprisonment can be found here and here.